Thursday night, Snarky Puppy brought the funk to Balliceaux as part of their 31 day tour of North America. Here are some thoughts, recordings and photos.

Thursday night, old fans and new fans enjoyed the funky fusion of Snarky Puppy as a seven member version of the band played non stop for two hours. The band played an impressive mixture of old originals, tunes from their newest record, new tunes and even a world premier. 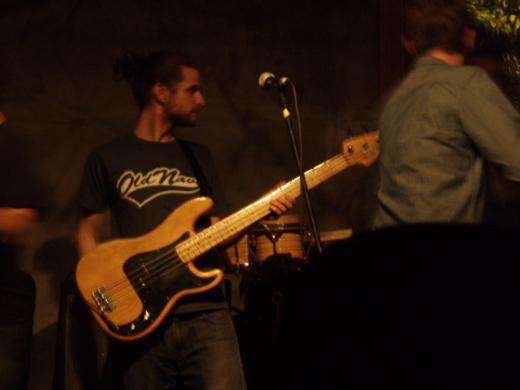 Fighting through a car accident and a huge detour to New York City, the band finally took the stage at 11:20. Solo shakers quickly led the way to a J Dilla style groove. Grammy award winning drummer Robert Searight was a highlight. His feel was impeccable and he is a great soloist behind the kit. Never short on ideas, Searight seamlessly blended embellishments and fills with the tight grooves and syncopated hits of the rest of the band.

On the next to last tune, the band invited up trombonist Bryan Hooten to perform on a New Orleans inspired original.

Touted as an extremely innovative band, Snarky Puppy is heavily influenced by funk and fusion from forty years ago. Their groove greatly outweighs their originality. That being said, 120 minutes of non stop music is tedious regardless of the band, but the talented soloists were excellent at taking similar canvases and painting them into original pictures.

Snarky Puppy has made a habit out of stopping in Richmond. They will be back soon and they are definitely worth checking out.

You can buy their newest album here.