Skyfall: 50 years in the making

The newest episode in James Bond’s life gives him some perspective on reality and helps him rethink his priorities (but not his workout routine). If you read the above and feel a thrill of recognition and a sudden urge to don a well-tailored suit, you may or may not love Skyfall, the newest installment of the mega-popular Bond franchise.

In the Venn diagram of movie-goers, I’d guess that the people who fall into the middle category are a large, difficult-to-please group. 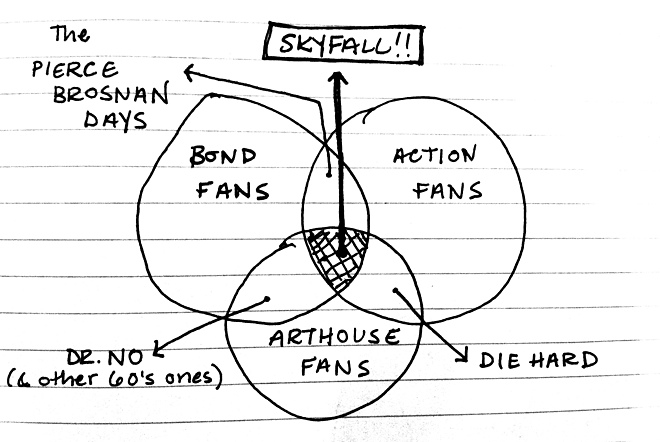 Skyfall’s probability of pleasing a member of just one of these sets is pretty small. It’s chock full of subtle Bond references, and its very theme revolves around the tension between Old Bond and New Bond, so to fully appreciate, you’ve gotta be somewhat invested in the series. Likewise, if you’re looking for a film that’s packed with car chases and gadgets, from the perfect Adele theme song in the beginning to the highly satisfying ending, you’ll be disappointed.

And thirdly, if you’re exclusively a fan of thinkpieces, you might want to duck. There are some pretty intense explosions coming your way.

But if you have three pieces of your heart reserved for action movies, arthouse flicks, and Bond-James-Bond, Skyfall is a safe bet.

Director Sam Mendes knows a thing or two about visual style–he did the groundbreaking (now much-maligned) American Beauty, the gripping Jarhead, and the gorgeous Revolutionary Road. What else do those three films have in common? A shared interest in unresolved internal conflict that eats up protagonists from within.

Poor Bond! His internal conflict has never been more pronounced than in this film (in fact, I’m not sure it was ever pronounced at all until the Daniel Craig era began). A mission in Turkey goes wrong for Bond when his boss, M (Judi Dench), makes a risky call that puts him closer to death than ever before. Bond is rocked by what feels like a betrayal, even though he knows that his mentor and commander is bound by duty to protect the mission, especially since this particular mission could endanger the lives of hundreds of secret service agents if it fails.

There’s a brief, shirtless interlude, and then a drunk, worse-for-wear Bond reports back to work. He’s back, but he hasn’t entirely sold himself on the idea of returning to a profession where he’s increasingly treated like a super-hot pawn.

M’s under fire as well, as new director George Mallory (Ralph Fiennes) begins to hone in on her operation. She’s losing ground with the Prime Minister, and although she outwardly refuses to justify her job, the pressure is clearly still there.

And, ugh, just to add another wrinkle to an already wrinkly, terrible day, her whole office blows up! It’s like Murphy’s Law over there!

I’ve revealed too much of the plot already, but I’ll just say that the action then turns to a super slick office building in downtown, neon-bathed Shanghai before moving to an exotic yet tasteful casino in Macau. Then it’s quick, back to London, where Her Majesty’s Secret Service continues to suffer attacks of all kinds. The government’s now conducting formal investigations into M’s world, and a madman (terrifically played by a possibly insane and definitely blonde Javier Bardem) has already decided M’s days are numbered.

Hang on, it’s time to break for another shirtless scene.1

Extensively thought-out and so elegant in its execution that I’d be surprised if it weren’t nominated for an Academy Award for cinematography, Skyfall circles the Bond franchise back to simpler, more precise times. There are one or two basic gadgets, but as the film progresses, they’re less and less necessary. Likewise, the scenery shifts from the clear, right angles of a glass-walled Shanghai to the craggy heaths of Scotland, where Bond himself got his start. Now in its 50th year, the Bond franchise is trying something different, introducing a new, quieter 007 with less time for wisecracks and more time for feelings. But not the kinds of feelings that make you uncomfortable. Never those.

And instead of exploiting the tired old sexual tension between Bond and Sexy Gal We’ll Never See Again, the relationship here is between an employee and boss who both know they mean much more to each other than that. With M as the only real Bond Girl in the film, the whole dynamic changes, and the world of Bond is suddenly unpredictable.

Don’t worry, though, most of these shirtless scenes involve him boning somebody or other. He’s still James Bond, after all.

While the script is nothing to write home about, it didn’t bother me too much. Too many hilarious one-liners would have ruined the film’s thrillingly dark tone. Instead, Mendes is left to do what he does best. Luckily for us, that includes motorcycle chases, daring escapes under the ice of a frozen pond, and top-of-moving-train fistfights with plenty of sudden tunnels.

You’ve just read a thousand paragraphs of gushing praise, and you’re still interested. Or, you identify yourself to be smack in the middle of my diagram. Or, you’re a connoisseur of pectoral muscles.

The slowish pace of Skyfall will turn many off. The explosions are large but they aren’t abundant, and if you’re jonesin’ for a constant stream of CGI destruction, you might want to look elsewhere.