Silver Linings Playbook: Feel-good is back The Oscars are such a funny thing. I don’t know about you, but I had no intention of seeing Silver Linings Playbook for two reasons: 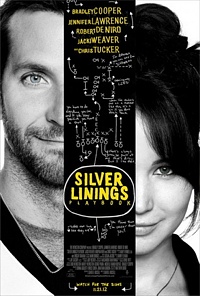 But guys, it’s so rare for a comedy to make the Best Picture Nominee list! And SLP is, when it comes down to it, a comedy. Protagonist Pat Solitano (Cooper) is just returning home from a stint in a mental health facility with a super-positive attitude and a tenuous grip on the bipolar disorder responsible for ending his marriage with his ex-wife, Nikki. Like any emotional disorder, bipolar disorder is in no way humorous. Pat’s struggles are tough to watch, and at times his outbursts scare even those who trust him most. But between episodes, he’s a funny guy with determined cheerfulness and a way of saying what’s on his mind that isn’t nearly as annoying as you’d think it would be. On the side, his Philadelphia Eagles-obsessed parents provide us with lots of opportunities to chortle, as does his henpecked friend Ronnie, and his delusional facility roommate Danny (Chris Tucker, where have you been, you adorable man!?). They’re all trying to live their own lives while supporting Pat in his convalescence. According to Pat Sr. (a seldom-seen, sweet Robert De Niro), all of these factors are tied to the victory or defeat of the Eagles.

Enter Tiffany, played by the ever-talented Jennifer Lawrence. She’s got some emotional issues herself, and she’s just as proactive about dealing with them. The two have an undeniable connection right from the start, and, though Pat’s working hard on becoming the kind of person he feels Nikki wants him to be, Tiffany’s influence starts to throw him in more interesting directions.

For the love of Pete! The plot sounds so tired, doesn’t it? Boy meets girl, girl convinces boy to be her partner in a dance competition, boy starts to change in a positive way, family is skeptical, football fans don’t understand dancing, etc. etc. Just because a plot line is overdone, doesn’t mean it still can’t be done well. There’s something to be said for a steadfast old plot skeleton covered in a well-written, well-acted skin, and clothed in perfect pacing. This analogy is getting weird.

Anyway, Coop basically doesn’t stop talking throughout the entire film, and yet, I found him to be Dudley P. OKWithMe! Turns out the dude has talent. I’m sure many of you knew that all along, but it’s a new concept for me, and I found the epiphany to be a delightful one. Jennifer Lawrence nails it, as usual, and even Robert De Niro does things I didn’t know he could do.1

Apart from these inspiring performances, this piece’s power comes mostly from director David O. Russell’s bumbling, sweet, and often intense screenplay. He expertly weaves together good times, bad times, sports times, and sad times to create a film that’s worth seeing, maybe even more than once.

One of the following is true: you have a soft heart, you like to laugh, you like football, you like dance, you like Philadelphia, you don’t like Philadelphia, you’d like a greater understanding of emotional disorders, you want to be convinced that Bradley Cooper can do something worthwhile, you enjoy the wonderfulness that is Jennifer Lawrence, or you enjoy writing Internet comments that tell movie critics how wrong they are.

All this praise notwithstanding, Silver Linings Playbook is really nothing to write home about. That is, it won’t change your life. But it might be a film to email home about or perhaps mention casually to the folks at home while you’ve stopped by to pick up the bag of old yearbooks your mom keeps bothering you to get out of her attic.