Side Effects: May cause surprise, despair, dry mouth, and diarrhea

Side Effects is director Steven Soderbergh’s final feature film, and it focuses on depression (and Channing Tatum). Steven Soderbergh has a knack for making me feel afraid, afraid of losing my humanity, afraid of inhabiting the same space as other humans, and then, especially, afraid of Channing Tatum.1 Now Soderbergh’s back and afraiding me more than ever! This time with…mental illness? Kind of? 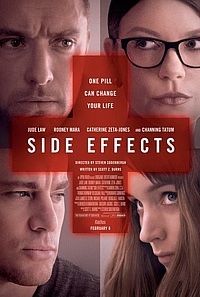 Side Effects is Soderbergh’s final feature film and his penultimate directorial work.2 He’s either decided to take up painting (?) or simply go on a sabbatical for an undetermined amount of time. With a filmography as diverse and lengthy as this guy’s, you have to suspect he’ll be back behind the camera eventually. At least I hope so, because without Soderbergh who else is going to keep casting Channing Tatum?3

But ChanFans shouldn’t get their hopes up too high, because Rooney Mara (Girl with the Dragon Tattoo, the American version) is the star of this one. She plays Emily Taylor, a young woman struggling with depression while her husband (Tatum) spends time in the clink for insider trading. He’s released and the two try to pick up the pieces of their formerly glamorous life in new, much less affluent surroundings. Emily falls further into a fog of depression and ends up in the hospital, treated by Dr. Jonathan Banks (Jude Law4). Banks, worried about Emily’s mental state, agrees to discharge her from the hospital if she agrees to attend regular sessions with him–luckily he’s a psychiatrist!

What follows is an incredibly ominous, but incredibly familiar scene–familiar, at least, to anyone who struggles with depression/anxiety or spends a lot of time with someone who does. Banks first puts Emily on one antidepressant, but that has a range of…depressing…side effects. He then switches her to another one. And oh wait, have you heard about this new one that I saw a commercial for on TV? But what about this one, it won’t make you gain weight and you’ll keep your sex drive! Nothing helps, Emily sinks deeper into depression, and the camera zooms in slowly on that week’s pill bottle as the music continues to drone ominously.

Honestly, at this point, I had such a feeling of ambivalence! On the one hand, I was like “Fuck you, movie!” I’ve seen the benefits of drugs helping to treating depression/anxiety, and I’m pretty sensitive about anything that comes across as anti-mental illness. But on the other hand, as Emily’s medical professionals casually joke about her condition and prescribe pharmaceuticals based on which drug company is lining their pockets the most, it’s hard not to think, “Yeah, totally! These people are pretty much the worst.”

Let’s be clear: I had several “oh shit!” moments while watching Side Effects, and I’m 100% willing to admit that’s because I’m not very bright. The venerable A. O. Scott says the “plot may be predictable.” Maybe for venerable folk, but not for me, who was continually surprised at every twist and turn. So there’s a lot to like about Side Effects that I can’t really talk about without wrecking the whole thing for you.

What I can talk about is how Rooney Mara will continue to be nominated for Oscars and will probably win one at some point in her life. Or that the crazy-tense score fills you with despair as you watch those close ups of pill bottles. Or that Catherine Zeta Jones is in the movie.5

So farewell Steven Soderbergh! I’ve enjoyed your movies and their copious use of Channing Tatum, and can only hope that your career as a painter will feature the ChanMan just as frequently.

If you’re a venerable film critic the predictable plot may put you off. If you’re my wife the sight of Channing Tatum may blind you with rage. If you have Strong Feelings about antidepressants or the mental health industry, the first half of the movie may distract you.