Shame is Steve McQueen and Michael Fassbender’s second project together, and follows a man who has an irresistible, all-consuming, and constant compulsion for sex. Oh also, it’s rated NC-17! What’s the last NC-17 movie you saw? The one that I remember actually making its way into Richmond theatres was 1995’s Kids–which, looking back, seems fairly tame compared to some of the R-rated movies I’ve seen in the last decade. That was 17 years ago, so when I found out that Movieland was showing Steve McQueen’s1 NC-17-rated Shame, I was pretty excited. This is a rare occurrence, people! It was my duty to review this film. Duty I say!

But guys, it’s is an NC-17-rated movie called Shame about sex. As you can probably hilariously imagine, this lead to lots of meta-shame during my movie going experience. Buying one ticket2 to an NC-17 movie on a Friday night, when the theatre is filled with couples and teenagers, makes you feel–guess what–shameful! For whatever reason! Not only that, but Movieland has stashed this film in Theatre 10, which is adjacent to the concessions, giving everyone a good long look at the sketchy guy getting his ID checked before heading in (alone) to the sex movie. 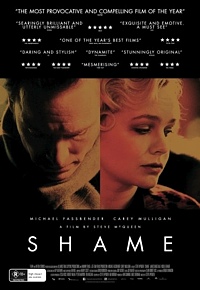 Anyway. Shame follows Brandon Sullivan (Michael Fassbender), a man who has an irresistible, all-consuming, and constant compulsion for sex/orgasms. While Fassbender is quite the looker, nothing about his sexual encounters (and they are many and varied) is attractive. This movie is not hott. Sure, he looks like a successful young dude, but it’s all a micro-thin veneer hiding his terrible sexmonster. Sullivan floats through his life distracted until the next time he can call a prostitute, pick up a random woman at a bar, or sadly masturbate in the bathroom stall at work. He manages to keep it all together, keep all the balls in the air, until Sissy (Carey Mulligan) shows up. From there, the veneer begins to crack, and Sullivan’s life–I guess you could call it a life–begins to fall apart.

Fassbender absolutely kills it in this movie. He’s basically playing sex-addict Batman, and he does it really freaking well. By day he’s a mild mannered, even-keeled philanderer, but by night he’s an emotional addict that’s constantly hounded by his addiction. There’s a scene towards the end of the movie where Sullivan is having sex with two prostitutes. The camera pans to his face and zooms in as he climaxes…and it’s terrifying. His face is distorted and disgusted, expressing the frustrations and shame from the film’s previous 90 minutes, as he succumbs–yet again–to his compulsion. It’s intense, way intense. That scene, while easily the most NC-17est part of the movie, might be worth the price of admission.

Carey Mulligan (who’s slated to play Daisy in the upcoming The Great Gatsby movie!!) is no slouch either. Sissy and Sullivan’s relationship is complicated, filled with tension, and at times violent; it’s a relationship that’s played out in few words but lots of excruciating moments. And honestly, sometimes they’re (purposefully, I’d guess) too dang awkward. At one point Sissy, who’s mostly transient but has landed a gig singing at a bar, does a slowjazzy rendition of Sinatra’s “New York, New York”–the entire thing.3 It’s several, painful minutes long.

But this, these awkward and overly long scenes, is one of McQueen’s things. His 2008 film, Hunger (also starring Fassbender), features a single shot of a man sweeping a loooooong hallway for what seems like an eternity and another single shot–17-minutes long–of a conversation between two men. It’s something that defines his style and might be off-putting (or distracting, like it is for me) to some.

So. The big question: why did Shame get the NC-17 kiss of death?

The people in charge of rating films say that the NC-17 rating is for “some explicit sexual content.” The Girl with the Dragon Tattoo, on the other hand, is rated R for “brutal violent content including rape and torture, strong sexuality, graphic nudity, and language.” Seriously? I mean come on! No one will ever convince me that Michael Fassbender’s penis is worse for people under eighteen to see than the absolutely awful rape scene in Dragon Tattoo. For whatever reason, we’re totally cool with blood, guts, rape, torture, and violence towards women, but throw a wang in the works and it is just too much.4

Do you love (painfully) slow and methodical movies like Tinker Tailor Soldier Spy? Do you love Steve McQueen? Do you love schadenfreude? DO YOU LOVE (100% unappealing) BOOBS AND WEENZ?

The aforementioned boobs and weenz are blatant, plentiful, and totally unavoidable. If that’s not your cup of tea, avoid. Also, Shame‘s pacing is slow, especially in the first half. I happen to think this works to the movie’s favor, but would totally accept it if that wasn’t your scene.