Rise of the Planet of the Apes: Look, it’s August, OK?

Pickings are slim in the last days of summer, but an article about a movie I surely would have ignored convinced me to go see this slice of CGI wonder. 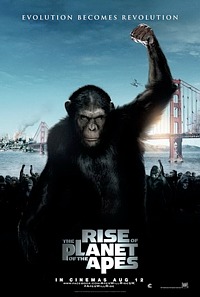 About twenty animal-cruelty-induced anxiety attacks later, I walked out of Rise of the Planet of the Apes wondering whether I was disappointed or impressed. If it hadn’t been for the article, I would have had the lowest of all possible expectations. But instead, the post made me feel that I was in for an Iron Man-esque surprise treat.

Rise of the Planet of the Apes came in squarely in the middle. As it was a prequel, I may have unintentionally ignored some of the more subtle nuances that would make a Charlton Heston fan squeal with delight.* One thing I couldn’t predict, though, was whether or not the earlier/later (damn prequel confusion) movies would encourage sympathy for the apes or what. Because this movie was pro-ape all the way. Certainly, there were some chimps that were crappier than others, but we fall in love with the main monkey, Caesar, the minute that Will (James Franco) saves him from the evil genetic testing lab. Will’s come up with a sexily packaged “cure” for Alzheimers that not only slows the disease, it actually makes the patient smarter. Caesar quickly begins to show that his ridiculously smart noodle has received the benefits of the drug genetically through his mother. He’s super close to being human, and guess what, it starts to feel pretty lame to be an almost-human who’s being walked around on a leash.

But Will’s not really to blame for what happens next. I won’t go into spoilery details, but let’s just say that Caesar ends up in a shelter managed by Brian Cox (delivering one of the only decent humanoid performances in the film) and his despicable son, Draco Malfoy.**

Let’s take a minute and discuss WTF happened to James Franco. Is he being bad on purpose? He’s so good-looking that it’s tempting to chalk it up to one of his goofy performance art experiments, but it pains me that he gets paid all these millions to churn out these puzzlingly awful characters. We know you can be good, James. We’ve seen it before, and it’s time to earn your keep around here.

Here’s where it all starts to make you feel feelings. Andy Serkis, the guy behind Caesar, does whatever it is he does to turn a pile of pixels into something that feels authentic beyond its obviously computer-animated skin. The combination of “Where are you going, Daddy? Why can’t we go home?” and “Why is this bad man hurting me?” in Caesar’s face and motions nearly sent me into some sort of maternal panic. I kept thinking of every pet I’ve ever had and every child I have ever cared about, and my heart rate grew to such a rapid pace that I was a little surprised I didn’t spontaneously combust in the middle of the theater, leaving some lucky moviegoer with a free iPhone and a purse full of ticket stubs.***

Luckily, resentment began to take over, so I was spared combustion via empathy. Resentment takes over within Caesar, too, and he starts to put that big brain to use, setting in motion a chain of events that I just have a strange premonition will lead to a dirty Charlton Heston rattling chains around. Most scenes that involved the apes were worth watching, even at the risk of heart failure, but the boring human parts were so bad as to negate them all.

Almost. My heart still does things when I think about sad-eyed monkeys and vengeful gorillas, but without the writing and support to back it up, this is no Wall-E. It’s just Rise of the Planet of the Apes: the movie I can’t believe I was persuaded to see, when really, I knew better.

*Although I’m not sure there was anything too subtle about this film at all. Space references, virus stuff — I figured out what was going on pretty quickly.

*** Mothers and mothers-to-be, take note. I’m currently growing one of those babies you’re always going on about, and I don’t think that it helped the panic attack situation. I’d avoid this movie and watch Victorian miniseries on Netflix instead.