Richmond Ballet’s Don Quixote: You are what you wear

Richmond Ballet’s newest full-length production refuses to be any one thing. Except maybe non-boring. We talk to Director of Costumes Emily DeAngelis about what it’s like to keep everyone clothed. There are so many things happening.

“It all swings between total doom and total jubilation, like everything else written during the Spanish Golden Age,” says Emily DeAngelis, Director of Costumes. She’s showing me a rack of costumes that swing ludicrously between “humble peasant” and “Harajuku.”

An artistic professional would walk into the Richmond Ballet shop and justifiably assume that Emily and her crew were working on several different shows at once–simple tunics in various shades of brown, severe black numbers with exaggeratedly plunging necklines, and mountains of searingly bright pink ruffles.

They’d be right. The RB’s costume department IS working on several shows at once. As Emily good-naturedly rattles them all off to me, it makes me squirm with transferred stress:
Wrapping up The Nutcracker, an upcoming Richmond Ballet II tour, a school tour, another company tour, rebuilding and refreshing for the company’s performances in China later this year, Minds in Motion, the gala, The New Works Festival (which involves a crazy-quick turnaround)…but that smorgasbord of costumes doesn’t belong to any of them.

It’s Don Quixote! The man of La Mancha! The Nicholas Beriozoff/Marius Petipa version of this classic ballet tells the Cervantes’s story of the Don and his sidekick, Sancho Panza, while at the same time depicting young love between Kitri and Basilio.

The leaps from silk and brocade to humbler cloth is a good indication of Don Q‘s range of characters. which, in itself, is a good indication of recent happenings at the RB. The two lovers are played by visiting Chinese dancers Wang Ye and Ma Xiaodong, who just arrived in town last week. Yes, last WEEK, two days before the company performed in an open rehearsal for press. RB’s grand Road to China adventure kicks off with this exchange, heralding in a new atmosphere of creative collaboration. 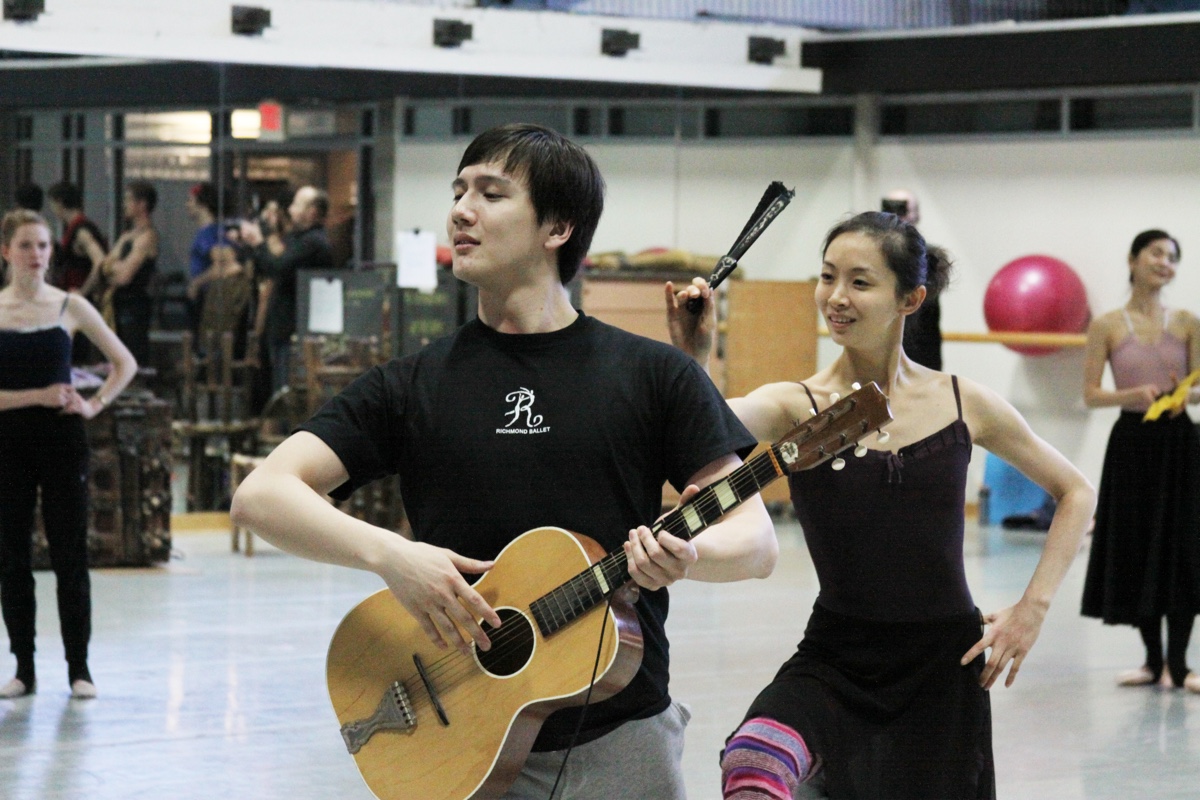 But then there’s Don Quixote himself, played by Ballet Master and former principal dancer Malcolm Burn, and the supreme dandy, Gamache, played by (at least in the rehearsal I saw–cast listing is not yet available) Matt Frain, one of the company’s newer recruits.1 It’s a diverse representation on the stage for this ballet, but Emily DeAngelis is prepared.

“This one over here,” she indicates the more drab end of the rack, “It’s like ‘Just going to the market, nobody mind me! Just going to the market with my tambourine! But then you’ve got the vibrant stuff,” she pulls out a highlighter-pink ruffly number and gestures towards the rainbow stack of traditional plate tutus in the corner. “It doesn’t look right all together in the rack, but in the show it works. It completely all clicks together and makes sense.”

Up close, the level of detail in these jackets and bodices and endless skirts…it’s almost annoying. Like, why bother going to such effort when the viewer of the outfit is dozens of feet away? Emily shows me a jacket that has gold appliqués on it made out of individual pieces of dyed lace. “From a distance, this looks just like a printed fabric, but look at the work that went into this!” She’s thrilled just to touch it, clearly, and it’s a treat to look at. Maybe the answer is just that designer Desmond Heeley is dang good at his job, and nobody involved in this production is willing to cut corners.

A bigger company’s costume shop would have three drapers, a first hand, a stitcher–she keeps rattling off titles, but the gist is that she and the other two production artists each specialize in more than one thing (like shoes and crafting, or wardrobe supervising and stitching). It’s effective multitasking, sure, but the general effect is that everyone is very, very busy. “I’ve been on a dress rehearsal on the floor cutting a dress in half, stitching it back on a body,” says Emily, who’s making her debut in a director position but has many years of experience working for musical theater. 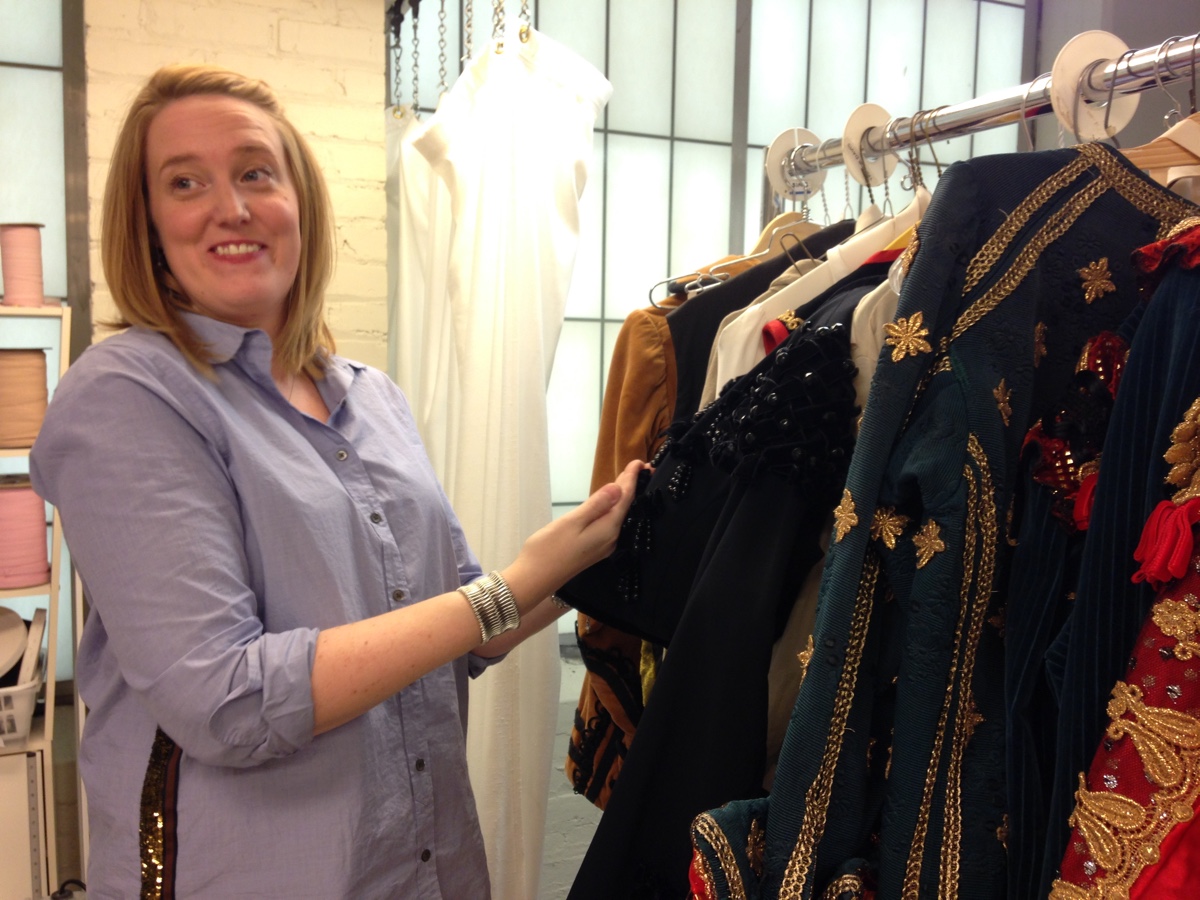 She doesn’t seem flustered easily, although she admits to calling up celebrated costuming veteran Holly Hines, who’s helping with one of the above projects. “She’s someone who I can call who’s been in the wars. It’s exciting and comforting to work with her, because she really has seen it all. And she’s so generous with the knowledge she’s gained, there’s no ego there.”

Desmond Heeley’s Don Q costumes are “a comfort,” says Emily, physically hugging a jacket. The shows designs are set in stone, so there will be no last-minute tweaking, such as she’ll see in the New Works Festival, for example. Her department has to work seamlessly with lighting to make sure everything looks as it was intended when it all goes together, and, she says, “sometimes you get to a technical rehearsal, and you go ‘!!!!!!'”2 These costumes won’t cause her that particular problem, which is good, because…did I mention they are detailed?

Gamache, the dandy I mentioned earlier, will stride about on stage in what are known as “pumpkin breeches.” Not only are these bulbous pantaloon-type shorts about three feet wide in total, but they weigh probably more than 15 pounds. And I know, because I held it myself. He also wears exaggeratedly high-heeled shoes with big bows. This is not the kind of thing you can take in a different direction with five minutes before curtain. Gamache has to practice with those breeches and shoes! 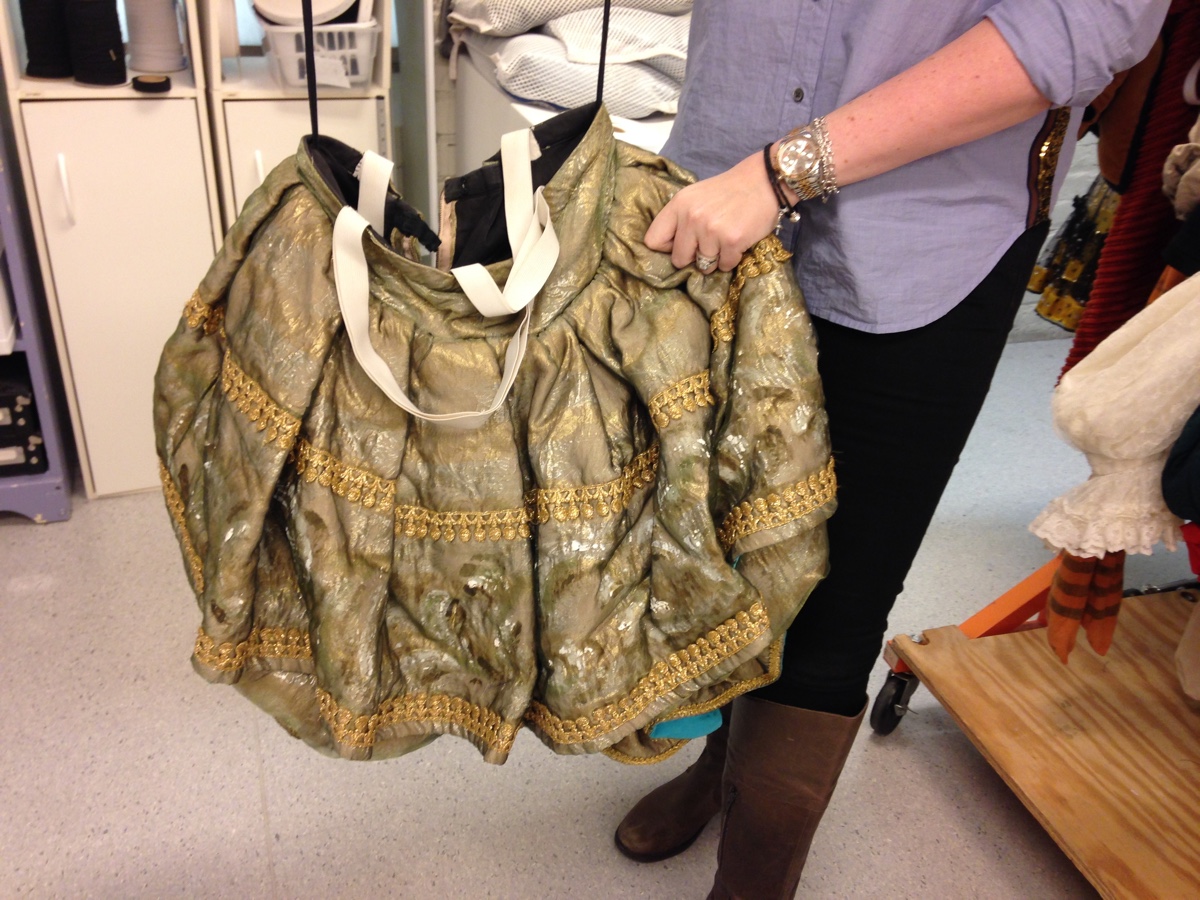 So huge. One ballet dancer could curl up within each half of those.

Putting that costume on a dancer was one of Emily’s reminders that despite the constant whirlwind, her day-to-day is pretty awesome. She recounts some anecdotes of people I promised not to embarrass by recounting. It can be a borderline obscenely personal relationship sometimes, between costumer and dancer, but even just in the short amount of time since she joined for the season, she feels like she’s among family.

“There’s this expectation that the dancers are super serious people, and I understand that. Just the amount of work and sacrifice they’ve done to get to this point in a career. But individually, they’re all clever, funny people.” [redacted anecdote (sorry)].

When someone asked Malcolm Burn at the open rehearsal what it was like putting a show together with two dancers from another company on the other side of the world, his response reminded me of Emily. He thought for a second and then sort of made a gesture of giving up, as he knew we wanted to hear about a bunch of barriers he has to break down. Instead, he said, “It really is not challenging. It really is just a delight…it’s just fun. A person shouldn’t be paid to have this much fun.”

As I was leaving, the Chinese dancers were coming into the shop for their fittings. Everyone was beaming as Emily and co. sprang into action, and I did feel like I was trespassing on some sort of family moment. I sneaked out, almost walking away with the giant pumpkin breeches before someone spotted me.

You, like me, will have to experience Gamache’s pants from afar. Don Quixote will be performed February 20th – 22nd, with tickets available online or at the box office at 600 E. Grace Street.