Our movie choices in RVA last week were terrible. Here’s four reasons to stay home, fire up Netflix, and watch Barbarella instead of the new Resident Evil movie. This past weekend was the second worst box-office weekend in 2012–outdone only by the previous week’s dismal performance. If you wanted to see a new flick, your choices were 1) Finding Nemo 3D or 2) Resident Evil: Retribution 3D. Since we all know how I feel about Pixar movies, I decided to begrudgingly pay 13 dollars to watch the fifth (!) installment in the Resident Evil series. 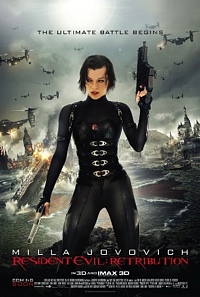 Embarrassingly (or awesomely) I’ve seen Resident Evils 1-3, and I would have seen the fourth had I know it existed. The well-laid formula from the previous four movies claws its way out of a shallow grave and shambles to the screen in this new iteration (BUT IN 3D):

You can expect as much from Retribution. The part where the film really shines, however, is nowhere. In no way does it shine. I do have one quick positive before I move on to what I really want to talk about (Barbarella). This Resident Evil uses 3D very effectively. If I’m paying extra money to see a horror movie with an added dimension, you better shoot some bullets into my face. I’m not looking for subtlety here folks, just bullets, knives, debris, helicopters, and blood flying through the screen. Thankfully, Retribution has them all!

After finishing up my 95-minute sentence with a terrible zombie movie, I went home and watched Barbarella on Netflix. Let me say this: Barbarella (starring Jane Fonda) is a way better use of your 98 minutes than Resident Evil: Retribution 3D. If you’ve got Netflix,1 then it’s available for streaming as we speak! Here are four reasons why you should avoid Retribution and watch Barbarella instead. 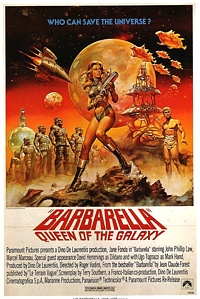 For me, cult classic is usually code for “terrible movie” or “movie that embodies a culture that you are too young to remember.” 1968’s Barbarella is definitely the latter. The screenplay is based on Jean-Claude Forest’s French comics that were at the forefront of the 1960’s sexual revolution. It’s a window into a strange, sexually liberated world that I am definitely too young to remember.

But if you’re interested in Resident Evil for the zombies, and it’s cult zombie movies you’re after, here’s a quick list of films that’ll fit the bill while simultaneously not sucking (unfortunately none of them are streaming on Netflix):

It’s cool to see Jane Fonda, who’s kind of a cult classic herself, in one of her early roles. And you really do get to see Fonda: Barbarella’s title sequence is a five minute spot of her floating about in zero-gravity with no clothes–which seems to be her default state.

Neither Fonda nor Resident Evil’s Jovovich get any help from their slow, poorly written scripts. But, and no offense to Jovovich, you can tell that Jane Fonda’s got something special.2 Which is totally true, because two years after Barbarella, she won the Academy Award for Best Actress for Klute. Crazy!

I love special effects from the 1960s–especially in science fiction films. I can’t get enough of psychedelic nebulae made from close ups of lava lamps and oil suspended in water or spacecraft that are tiny cardboard models. It reminds me of Star Trek, which is never a bad thing.

I’m bored with hyper-realistic baddies saturating a computer-generated landscape, so these old school effects are refreshing and eminently more interesting than anything Resident Evil has to offer. It says something when the final boss of Retribution–a massive, thirty-foot tall monster that has no skin or skull–comes across as boring and expected.

Make sure you note the blue rabbits hopping around in the background near the end of the scene…?

Barbarella, is many things, but totally lucid is not one of them. Over the course of an hour and a half you’ll meet The Catchman (who hunts children), Pygar (the blind, winged man who never wears a shirt), and Professor Ping (who’s played by the world’s most famous mime: Marcel Marceau). There’s even a deadly torture device called the Excessive Machine, which kills you with…orgasms?

Unlike Retribution–where monsters pop out on cue, nameless minor characters die at all the usual places, and climatic final face-offs are anything but–Barbarella is totally unexpected.3

Why you should see this movie (Resident Evil: Retribution)

You should not. Do not see this movie.

Any reason will do. Maybe you have to go to the bathroom?