RED: What does it mean to you?

“What do you see?” These four words set the tone for RED, a play about Abstract Expressionist painter Mark Rothko. In my mind there are few smells more potent, yet charming, than those found in a painter’s studio. Maybe it’s the years I spent attempting to paint still lifes in college surrounded by the scent of oil paint and solvents or the hours I spent reading about paintings that transformed “art” as we knew it. Either way, I have an extreme sense of familiarity and comfort when stepping into a painter’s studio.

So you can imagine how elated I was to find the intimate Theatre Gym transformed into Abstract Expressionist painter, Mark Rothko’s, studio for John Logan’s play, Red–a play defining and challenging relationships between an artist, his work, and his assistant. From the drop cloths, canvases, and mixing buckets, to the paint splattered floor and brushes strewn about, the attention to detail in the set design seamlessly places the audience amidst Rothko’s works in progress at the height of his career in 1958.

Minutes after finding my seat, David Bridgewater (playing Mark Rothko) appears on stage staring in a brooding and inquisitive manner at the audience. He displays a combination of quiet frustration, passion, and intrigue—emotions Bridgewater brilliantly conveys using no words. Entering shortly after the stint of silence is Rothko’s assistant Ken, played by Maxwell Eddy. Rothko immediately asks Ken, “What do you see?” These four words set the tone for the remainder of the one-act play. 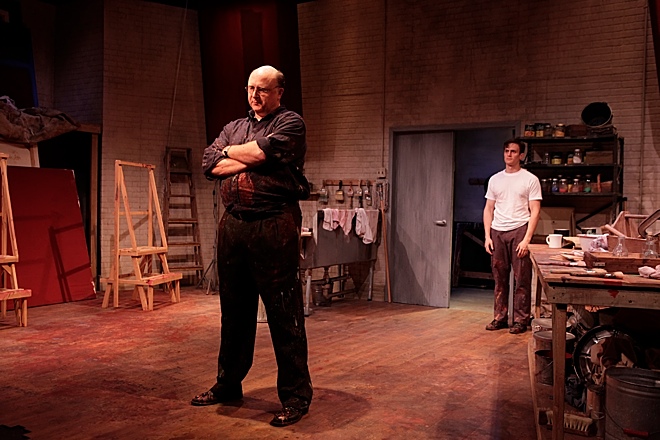 Mark Rothko (September 25, 1903 – February 25, 1970) was an American painter known to be turbulent in his opinions and conversations; there were few conversations with Rothko that could be labeled as easy. As an Abstract Expressionist, subjective emotion was at the root of his work. He demanded depth and meaning in himself, his work, and others. This part of Rothko’s personality shines through in his on-stage relationship with his assistant, Ken. Rothko pushes Ken to dig deeper into his conversations to find the origin of his thought, most often asking, “Why?”, or, “What?”, or “When?” Rothko pushes Ken to open up about the murder of his parents but makes it very clear he will not stand in as the role of a parent. Their relationship is volatile, but (to no surprise) has extreme depth and admiration.

Ken, in turn, challenges Rothko to back down from his stereotypes set around artists such as Jasper Johns, Jackson Pollock, and Andy Warhol. This task proves to be much more challenging, due to the timing of Ken’s employment. At the time of the play, Rothko was reaching a very high point in both his fame and finances through his “multiform” paintings. His paintings were selling faster than ever before, he was featured in select magazines, and he’d just been commissioned to paint a series of canvases for the Four Seasons restaurant in New York City.

The unfinished, commissioned paintings are what the audience soon finds out Rothko was staring at in the opening scene of the play. This commission becomes the root of almost every conversation for the two years Ken is employed by Rothko. There are exciting moments of revelation and movement, which are quickly offset with futile conversations of Rothko’s image. Rothko becomes extremely depressed as his fame grows due to the misunderstanding he feels his patrons now have of his artwork. Due to popularity, Rothko felt as though his paintings were purchased and displayed to follow the fad, going against his intentions to present art that can possess its own form and meaning to the owner.

Ken earnestly attempts to convince Rothko that not everything has to have deep meaning, that sometimes artists want to paint for the ‘right now.’ Eddy (Ken) shines amidst these conversations, as he finally stands up to Rothko in a very convicting manner. This infuriates Rothko, launching him into a tirade about the extreme value he places on his paintings and why meaning and depth are critical to their success. It’s in this moment, and through Bridgewater’s powerful delivery, that we begin to understand the relationship an artist has with his/her canvas. Regardless of the artistic movement, passion and extreme commitment form the bond of each brush stroke. Ken fights for the bond that is in the now and often unexplainable, while Rothko fights to hold on to what he feels to be the dying bond that requires nurture and interpretation.

Red is an incredible play of loyalty, passion, and conviction, not only in one’s work, but also through the relationships that drive that work. Eddy and Bridgewater command the stage for the full hour and a half production, leaving you with an admiration for honesty, volatility, and dedication.

RED is now playing at the Theatre Gym at Virginia Rep Center through June 16th. Tickets can be purchased online.