Great photos are heading to town. Here are some of the great stories behind them (and how the pottery of former Redskin Chris Cooley is involved). “I look back at it sometimes with the feeling of, ‘Holy shit, I was there!'” said Richard Busch, 72. It was the late 1960s when Busch jet set across the country to hang out with and photograph icons like Jimi Hendrix, Roger Daltrey, Jerry Garcia, and Eric Clapton. Sometimes those times seem normal. “Sometimes I’m a little amazed.”

Busch will curate about 24 of those photos for an exhibit at Steady Sounds throughout December.

Not only do the photos frame musical heroes in time, they also capture the life of a once-reluctant photographer who happened upon the world of 1960s protests, music, and ubiquitous reefer.

“I got out of college in ’63, and at the time kind of fooled around with the camera, but I didn’t have any idea what I was doing,” said Busch, now a retired magazine editor, from his home in Leesburg. He entered the Army after graduation. “Instead of going to Vietnam, which was just kind of escalating, I was stationed at Fort Meade in Maryland,” he said. He went to work in the Public Information Office. “I was assigned to write stories, propaganda for the Army.” He learned a bit more about photography by taking his camera with him on assignments.

“When I got out of the Army in ’65…I wanted to do journalism,” he said. “I was more interested in writing than in photographing at the time.”

He landed a job at LIFE Magazine on the “lowest rung of the ladder,” getting the opportunity to do bits of writing and reporting. He also worked with some of the most talented people in national journalism. “I was surrounded by world class photographers working at LIFE,” he said. As part of his position, Busch would tag along with those world class photographers on assignment, setting up travel arrangements and lugging their equipment. Seeing those photographers work and picking their brains “was the trigger.” It flipped on a switch in Busch’s brain.

Two years into his time at LIFE, he was sent to report out of the magazine’s Miami bureau. One day, he and a photographer were sent on a story in the Caribbean. “We wound up in Nassau in the Bahamas, and one night went to the casino and did some gambling.” The black jack table was particularly kind, with Busch taking away $400. “I went out the next day and bought my first real camera,” Busch said. A Nikon SLR with a zoom lens1 “That helped me think more seriously and professionally about photography.”

He ended up taking a few pictures that found their way into the magazine. There was a lot to photograph in the late 1960s: anti-war demonstrations, a musical revolution, and the rise of the counter culture. “I was kind of wallowing in all that period stuff. Going to marches and demonstrations,” Busch said. “This was a time when everyone was smoking dope, and there was a lot of reefer around.” Protests were occurring and rock music was “booming with Hendrix and the Stones.”

In 1968, toward the end of his time at LIFE, Busch dated a woman that had “entrées into a lot of musicians.” Through her, he met many of the rockstars he’d later photograph. 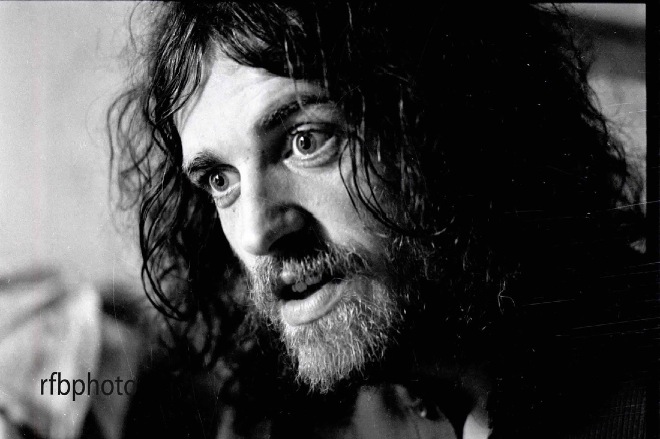 It was easy for amateurs and hobbyists to take concert photos in the late 1960s. “At the time, anybody could go to a concert, sit down in front, and snap pictures,” Busch said. Today’s signs of “No Photography Allowed” and security searches to remove unwanted cameras simply didn’t exist.

Busch remembers one night when he attended a Joe Cocker concert at Fillmore East in New York City. “That was a big, very hip venue for a lot of rock stars,” he said. “Somehow or other, I wound up in [Cocker’s] dressing room” while he was being interviewed for another publication. Busch said Cocker was striking because he was “very intense” during the interview. “The eyes were penetrating and the expression is: he’s engrossed in conversation.”

Busch remains fascinated in what he calls contemplations . “People being intentionally focused on something, on their own thoughts or something that they’re seeing.”

Busch met Roger Daltrey just as he met Cocker, through happenstance. The Who had performed their rock opera Tommy at Manhattan’s Lincoln Center. “My girlfriend at the time knew the manager of The Who, so I met them and wound up after the concert at a bar across the street where everybody went and, somehow or other, I wound up behind the bar and Roger Daltrey is sitting at the bar…and he’s looking right at me.” Busch immortalized the moment. 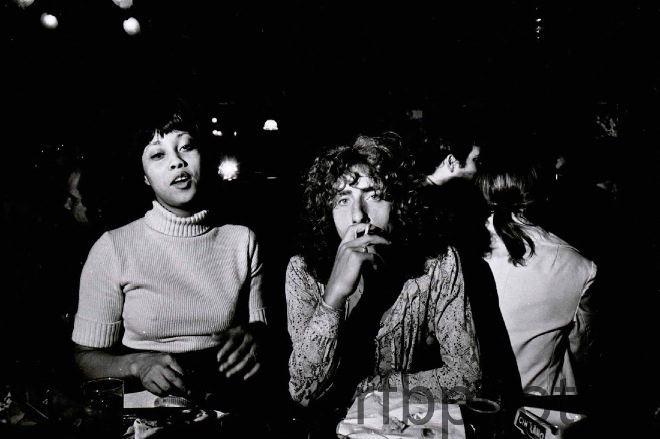 Busch didn’t only catch celebrities coincidentally, he sometimes spent significant time with them. He once drove Grateful Dead singer Jerry Garcia, an admirer of art and architecture, to visit The Cloisters in New York. “I found him to be a very easy guy, a good guy. Delightful, smart, not at all affected or playing the role of the rock star,” Busch said. “It was a memorable afternoon.”

Ike and Tina Turner were other people he hung out with. “I spent a week with them in Las Vegas,” Busch said. “One day, I took them out to the desert just outside the city limits.” While driving, they happened upon a wrecked station wagon. The duo posed for a picture that was later published in Show Magazine.

“One of the things I always wanted to do was concentrate on the subject,” Busch said about his photography. “When I’m shooting a person, generally I want to downplay the background,” and create a narrow depth of field

“Most of the photographs I’ve taken over my entire life I’ve taken for myself,” Busch said. “Many of them are personal pictures I’ve taken along the way of people I knew and places I visited.” He continued taking pictures after he left LIFE in 1969. Later he freelanced for several years, then spent his professional career editing Popular Photography magazine, a US Airways inflight magazine, and National Geographic Traveler.

“I kept going with pictures, just because I love taking pictures.” But the world of photography wasn’t as present in his life as it was in the late 1960s. It took the odd pairing of pottery and a former Washington Redskin to bring it back.

From pot to pottery

Nearly a decade before Busch retired in 1998, he became interested in pottery. Busch ended up meeting, somehow or other, former Redskins tight end Chris Cooley.

Known most for his work on the gridiron, Cooley’s also a serious potter who in 2010 opened his own art gallery, The Cooley Gallery, in Leesburg, where Busch lives. Cooley asked Busch to be a represented artist. “He invited me to be part of it to show photography and pottery,” Busch said. The involvement led Busch to once again immerse himself in the world of photography.

Richmonders will soon have a chance to view and purchase curated photos Busch took of several music icons in the late 1960s at Steady Sounds throughout December. Roughly ten photos will be 20” x 30”, along with smaller sizes. All photos will be available for purchase.

“If they appreciate those particular musicians from that era, they’ll hopefully like the way they’re rendered in my pictures,” Busch said. “It’s nice to have people appreciate the pictures and get enjoyment out of them.”