In Cloudy With a Chance of Meatballs 2, Sony Pictures Animation offers up a second helping of the adventures of Flint Lockwood and the rest of the ol’ Chewandswallow gang. When I saw the trailer for Cloudy With a Chance of Meatballs back in 2009, I’ll be honest: I was a little pissed. I understand the need to take artistic license in order to stretch a 32-page children’s book into a 90-minute film, but why such a dramatic departure from the look and feel of the original material? Judi and Barrett’s beloved book was first printed in 1978, and part of its charm is that it looks like it was printed in 1978–all cross-hatch drawings and muted colors. When I saw all that computer animated mumbo jumbo I said, “No thank you!” and wagged my finger at Sony Pictures Animation for daring to muck up such a classic example of children’s literature. And then I probably told the damn teens to get off my lawn.

Cut to four years later when I have an almost-five-year-old little boy, and I found myself sitting in Friday’s 4:00 PM showing of Cloudy With a Chance of Meatballs 2 feeling much less high and mighty about my entertainment choices. Hey, you do what you gotta do to keep everyone from melting down during the very specific hell that is the post-school/pre-bedtime part of the day. I just needed something to keep us both busy and happy until dinner.

Turns out, Cloudy With a Chance of Meatballs 2 managed to do that–and, overall, do it pretty well. 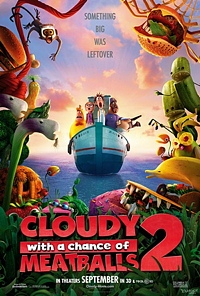 If you haven’t seen “the original” Cloudy With a Chance of Meatballs, don’t fret. As you probably gathered, neither myself nor my son, JR, had seen it before checking out the sequel either. Luckily, this installment opens with a snappy recap before picking up right where the first film left off–like, literally the moment that takes place right after the first one ended.

We find wannabe inventor Flint Lockwood (Bill Hader) sharing a celebratory smooch with local weather enthusiast Samantha “Sam” Sparks (Anna Faris) as their fellow residents of Chewandswallow cheer over the (supposed) demise of “Flint Lockwood Diatonic Super Mutating Dynamic Food Replicator” (FLDSMDFR), a machine that transformed water into food. Flint created this machine back in the first film because when the Baby Brent Sardine Cannery, the town’s only source of money, closed down, all the townsfolk had to eat were sardines, sardines, and more sardines. But, of course, the FLDSMDFR went all kooky, food started to mutate, a tomato-tornado wreaked havoc, and Flint had to destroy his own invention to save his tiny island town.

Which he does–but not without leaving a giant, uninhabitable mess. Enter Chester V (Will Forte), Flint’s childhood idol and head of Live Corp, the revolutionary tech company tasked with cleaning up the island. Not only does Chester V want to restore Chewandswallow to its former beauty; he also wants Flint to join his team of inventors at Live Corp. But a few months after Flint relocates to San Franjose to start anew, Chester V informs Flint that the FLDSMDFR is still working, but now it’s popping out vicious “foodimals” that are hell-bent on taking over the island…and THE WORLD?!?!

At Chester’s request, Flint returns to Chewandswallow–with Sam and other friends from the original film in tow1–to locate and disable his notorious machine, thus snuffing out the island’s new inhabitants. Team Flint finds Chewandswallow teeming with half-food, half-animal creatures like hippotatomuses, flamangoes, misquitoasts, shrimpanzees, watermelephants, and the terrifying Taco-Dile Supreme. But what starts as a simple seek-and-destroy mission soon becomes more complicated as Flint and his friends discover that these foodimals are not what they seem–and neither is Chester V.

Cloudy With a Chance of Meatballs 2 clocks in at just over 90 minutes, each of them jam-packed with nonstop, cartoon-y action. It relies heavily on visual humor, particularly in the clever depiction of the foodimals but most successfully in the character of Chester V. Adult viewers will surely note how closely this tall, thin, bespectacled man with a trim beard and a fitted, black shirt resembles a certain recently deceased CEO of a certain multi-billion dollar corporation. And while the voice cast is strong across the board (James Caan is especially fantastic as Flint’s dad, Tim), Forte’s portrayal of Chester is the standout here; he simply oozes smarminess and evil.2

Now although the concept behind Cloudy With a Chance of Meatballs 2 and the animation and acting that carry it out are all quite enjoyable, I found myself not as enthusiastic about the movie as a whole. Films for kids tend to have pretty clear messages, but I wasn’t sure what wisdom (if any) this one was trying to impart to its young audience. Being smart is cool? Home is where your heart is? Don’t trust big corporations? All of the above?

Don’t get me wrong, it’s a fun watch, and JR and I both had some definite, legit LOL moments. But that lack of an anchoring theme makes me think that in their efforts to make this movie do cool things, the filmmakers forgot that they had the opportunity to say cool things to their young audience as well.

Just some food for thought, Sony.3

You saw the first one, liked it, and want to see what happens next.4 And you just really, really like puns. (Hippotatomuses?! That’s hilarious, guys.)

You really, really hate puns and anything that sort of makes fun of Steve Jobs.

OK, so there are two females in this film who speak to each other: Sam Spark and Barb, an orangutan with a human brain (courtesy of Chester V).5 How do we adjust the scoring if an ape is involved?