Quartet: Giving up on life in Downton Abbey What a shit week for movies. New openings included such greats as: Hansel & Gretel: Witch Hunters, Movie 43, and Parker. That trio of movies currently sports an average Rotten Tomatoes rating of 19%. Like I said, a shit week. Luckily, Richmond is now blessed with not one but two independent-focused theaters: the Westhampton Theatre and the newly opened Criterion Cinemas. Everything at Criterion, while super interesting (especially Barbara), was a couple of months old or available on Netflix. The Westhampton, however, was showing a movie starring…the Dowager Countess herself, Maggie Smith! 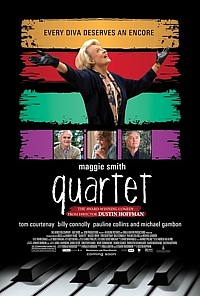 Quartet is a movie about rich, old people. Specifically, rich, old musicians who’ve since retired from the thrill of the stage and now live in a Downton Abbey-like retirement community. Three of the residents, Reg (Tom Courtenay), Cissy (Pauline Collins), and Wilf (Billy Connolly) are old friends who performed together in an opera quartet ages ago until the group had a falling out.

For an unknown reason, the massive and idyllic estate is “in danger of going under” unless the annual gala put on by the aging residents raises a boatload of money. Too bad the gala lacks the star power needed to sell enough tickets. Oh well, I guess all of the residents will just…? Get thrown out onto England’s cobblestoned streets? Move to the shabby and totally unacceptable Downton Place? It’s not really clear, but I guess it will be terrible?

Fear not fans of musicians gone by! The fourth member of the famed quartet, Jean (Maggie Smith), arrives to save or ruin the day. WHICH WILL IT BE?! You’ll have to either find out for yourself or have ever seen a movie in your life!

Quartet1 is Dustin Hoffman’s (yes, that Dustin Hoffman) directorial debut. Annnnd I’m not really sure what to think. It’s predictable, corny, saccharine, but maybe just what you’re looking for if you’ve been retired for fifteen years and have nothing else going on this Sunday afternoon. The individual performances are chuckleworthy at times, especially Connolly and Collins. Plus, it’s hard to top Maggie Smith–even if she doesn’t have the best material to work with.

But here’s the thing. Quartet paints, what I think is supposed to be, a charming picture of retirement. The once-famous musicians participate in group practice sessions, teach lessons to children, and, of course, they perform in the annual gala to tens of people. But meanwhile, the talent they once possessed has shriveled and is beginning to crumble. Their friends (and their mental faculties) disappear or die. Billy Connolly tries to have sex with everyone and fails. But at least they still have their music, right? And the annual gala! The message of Quartet seems to be: once you’re old you should take whatever you can get, however meager, and be happy with it. This seems kind of patronizing.

And weirder still: the retired musicians in this movie are played by actual retired musicians! The casting and production of Quartet is the real world incarnation of the message in the movie’s plot. But at least those once-famous, retired artists have something, right? Even if it is just bit parts in Dustin Hoffman’s directorial debut. They should take what they can get and be happy with it!

And the audience, which is sure to be mostly the over-sixty set, they shouldn’t expect a thoughtful movie about growing older, right? At least this movie has old people in it! They should take what they can get and be happy with it!2

Quartet is the Inception of patronizing our elders.

You love Downton Abbey and Maggie Smith. You thought this was a movie starring John Cleese, but you’re willing to accept Billy Connolly.

You’re a retired musician who’s happily satisfied with your life. Or maybe you have a paralyzing fear of growing old.