Brothers in the Gilmer Alley 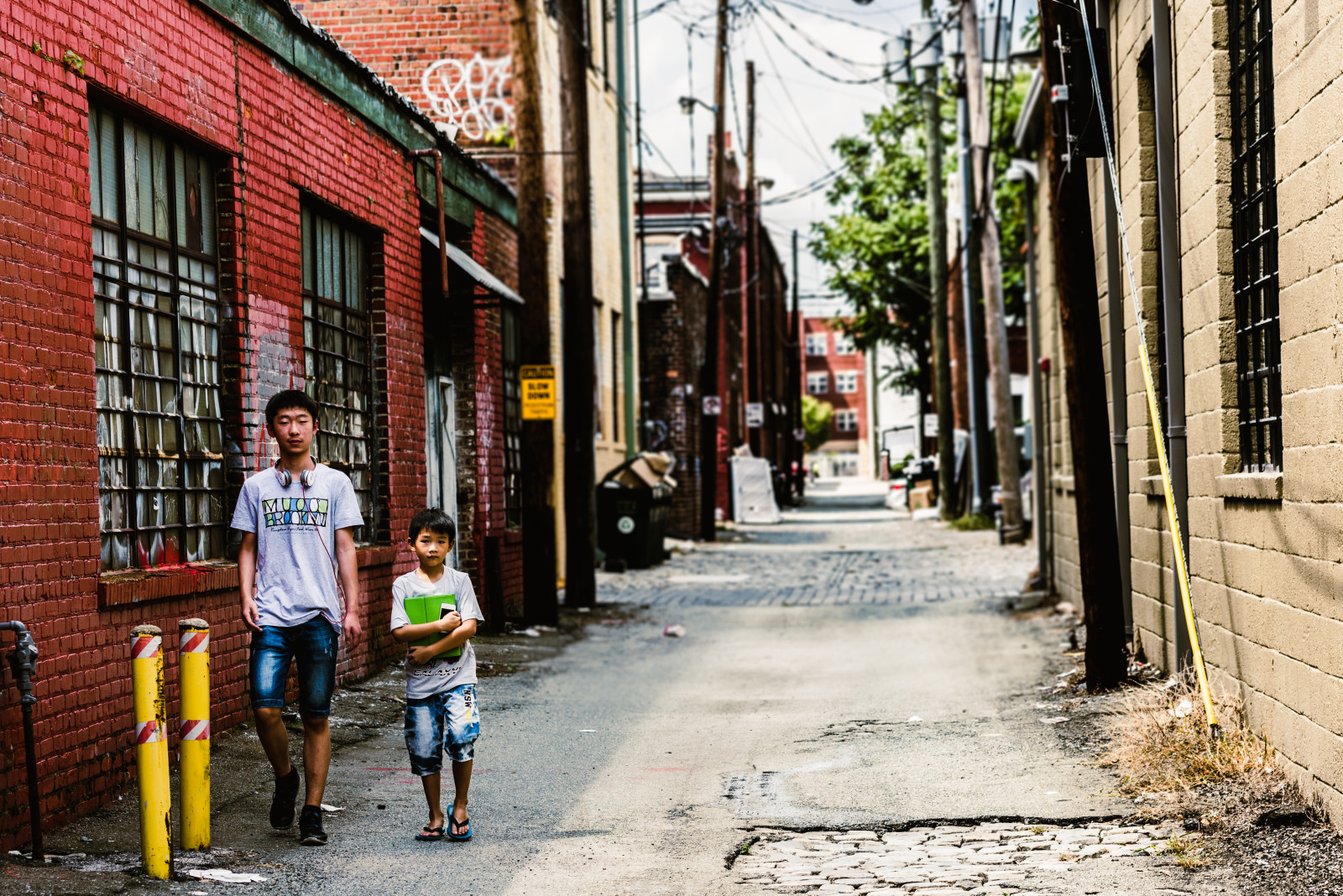 Between W. Broad Street. and W. Marshall Street, off of Gilmer Street.

On her way to class 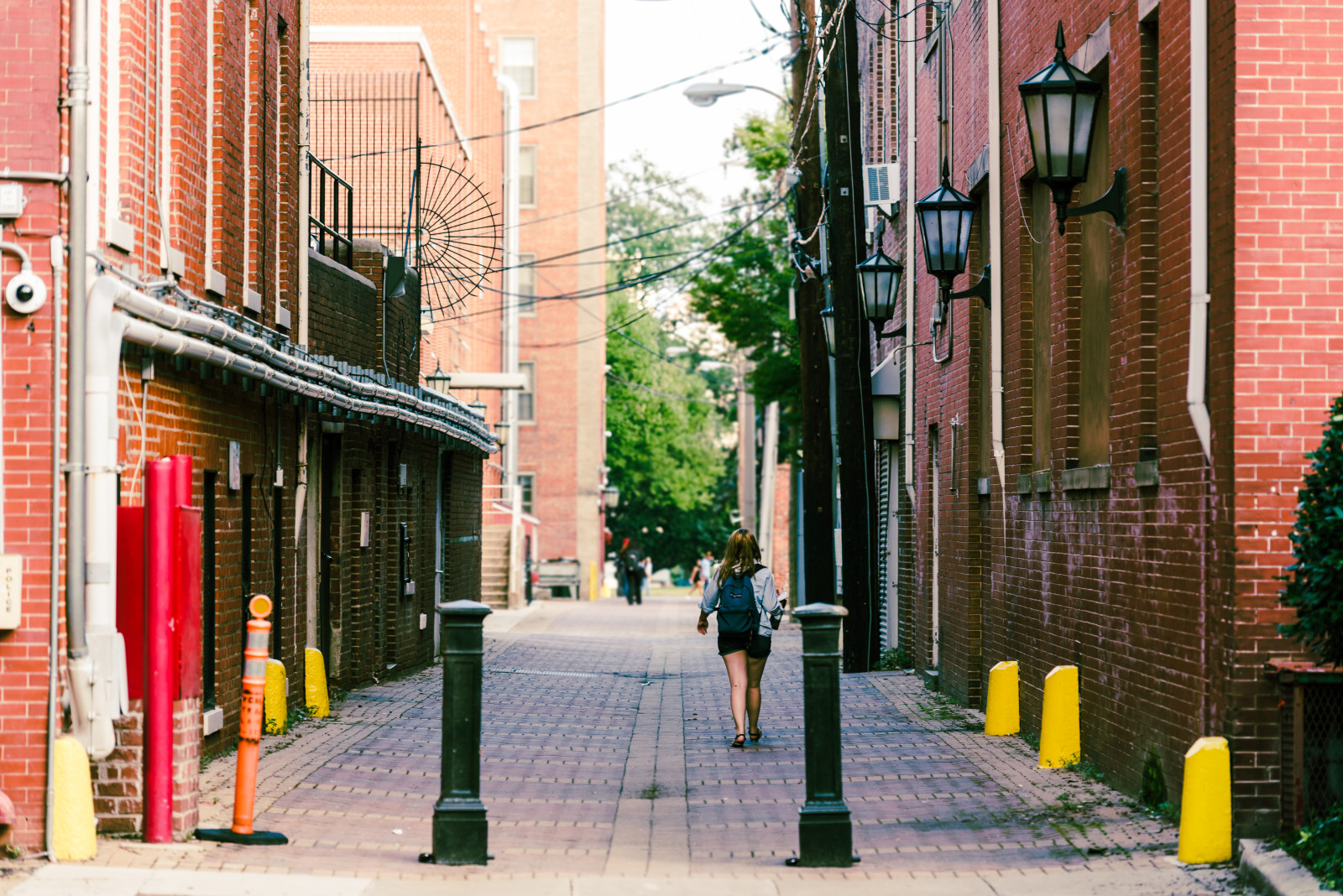 Between Cathedral Place and W. Franklin Street, off of N. Laurel Street, 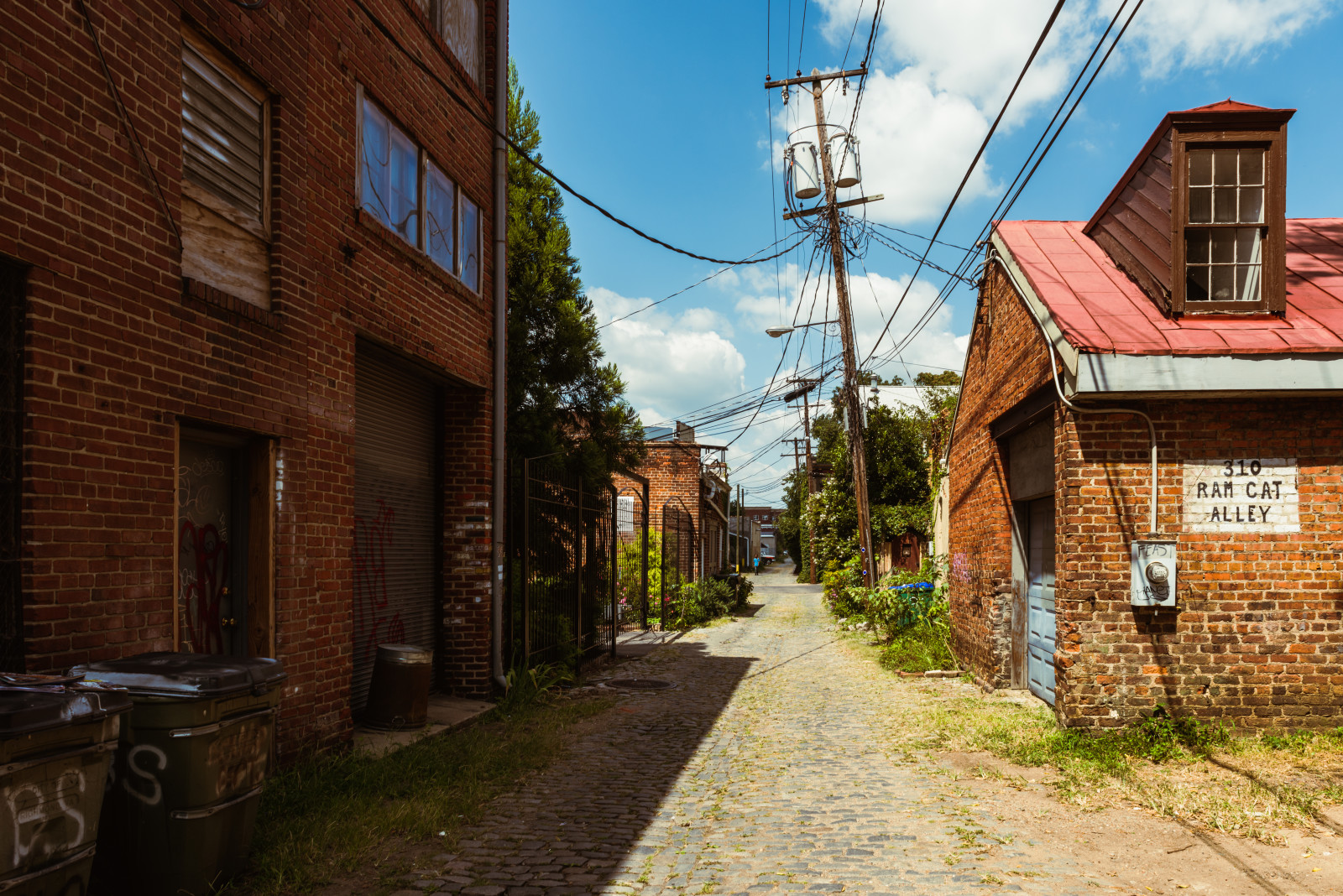 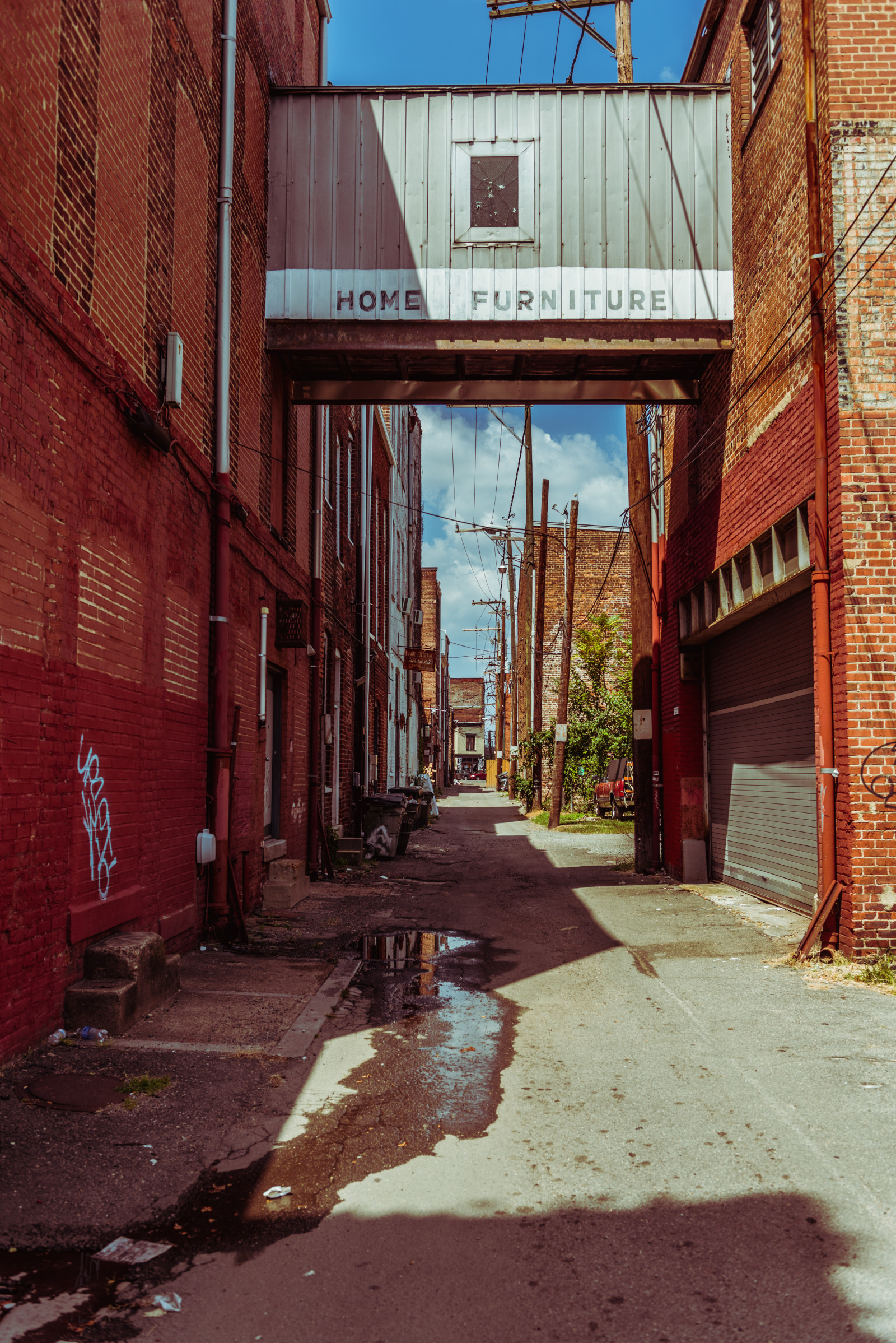 Between E. Broad Street and E. Marshall Street, off of N. 1st Street. 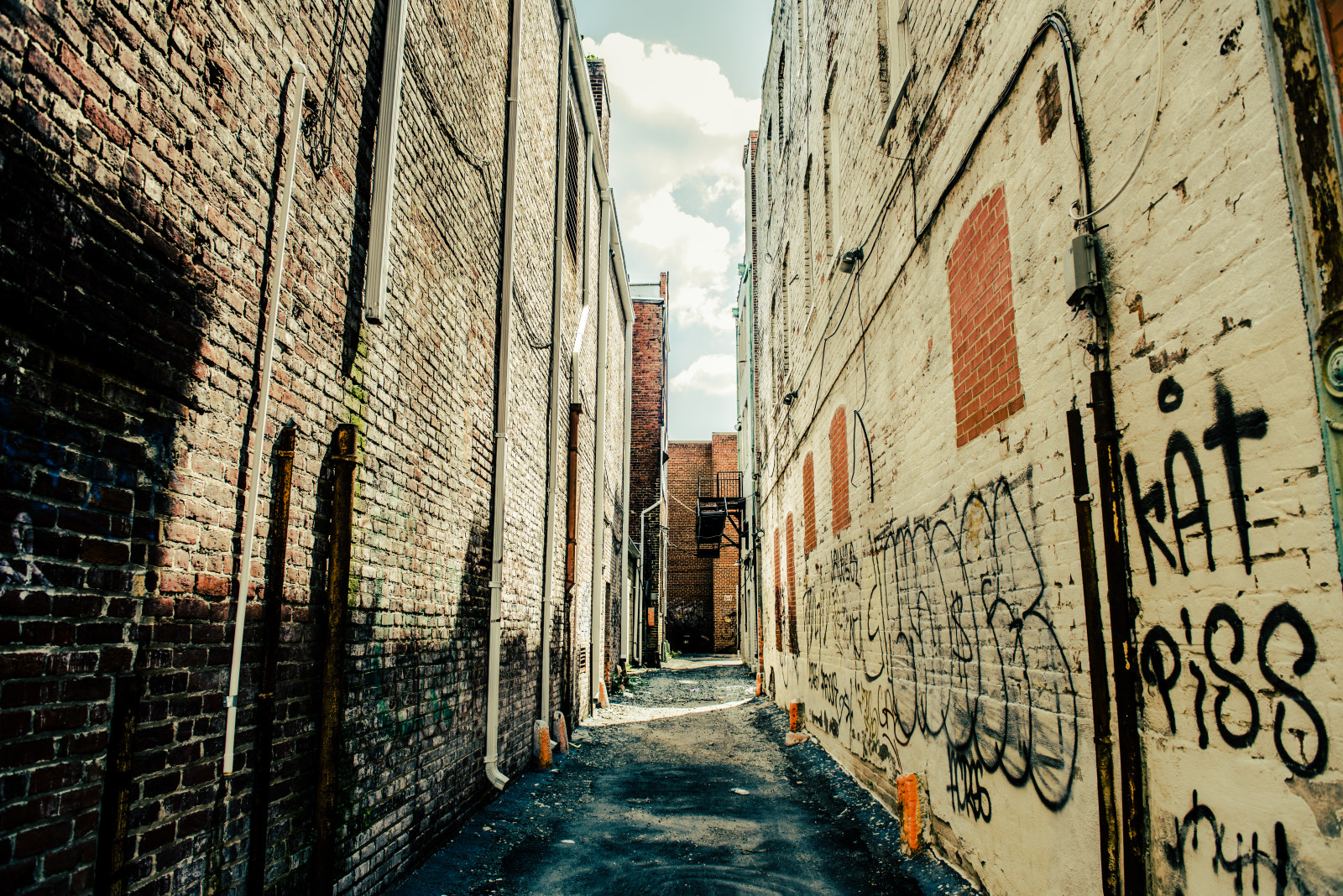 Between E. Grace Street and E. Broad Street, off of 3rd Street 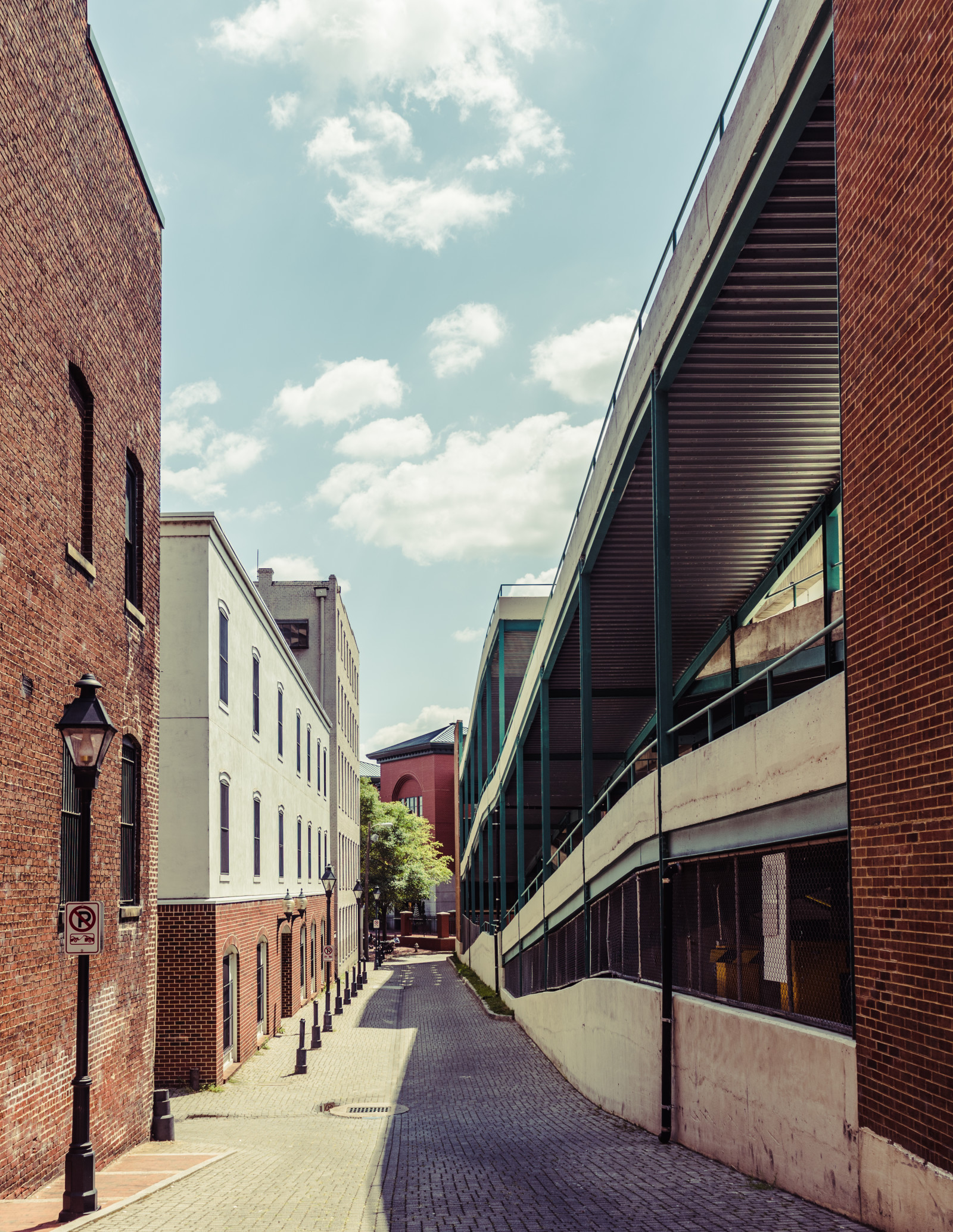 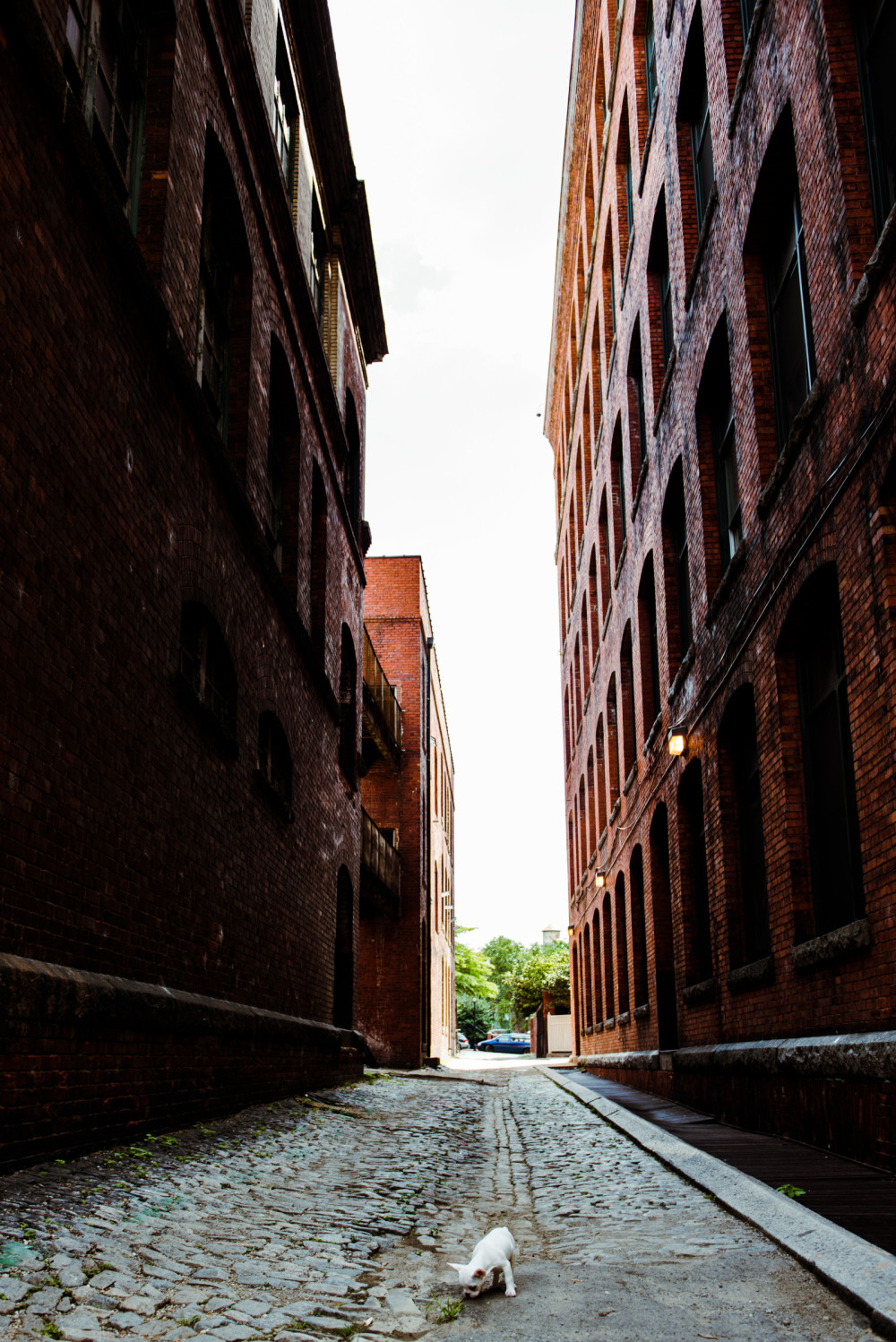 Between E. Cary Street and E. Main Street, off of 23rd Street

Green House on the Corner 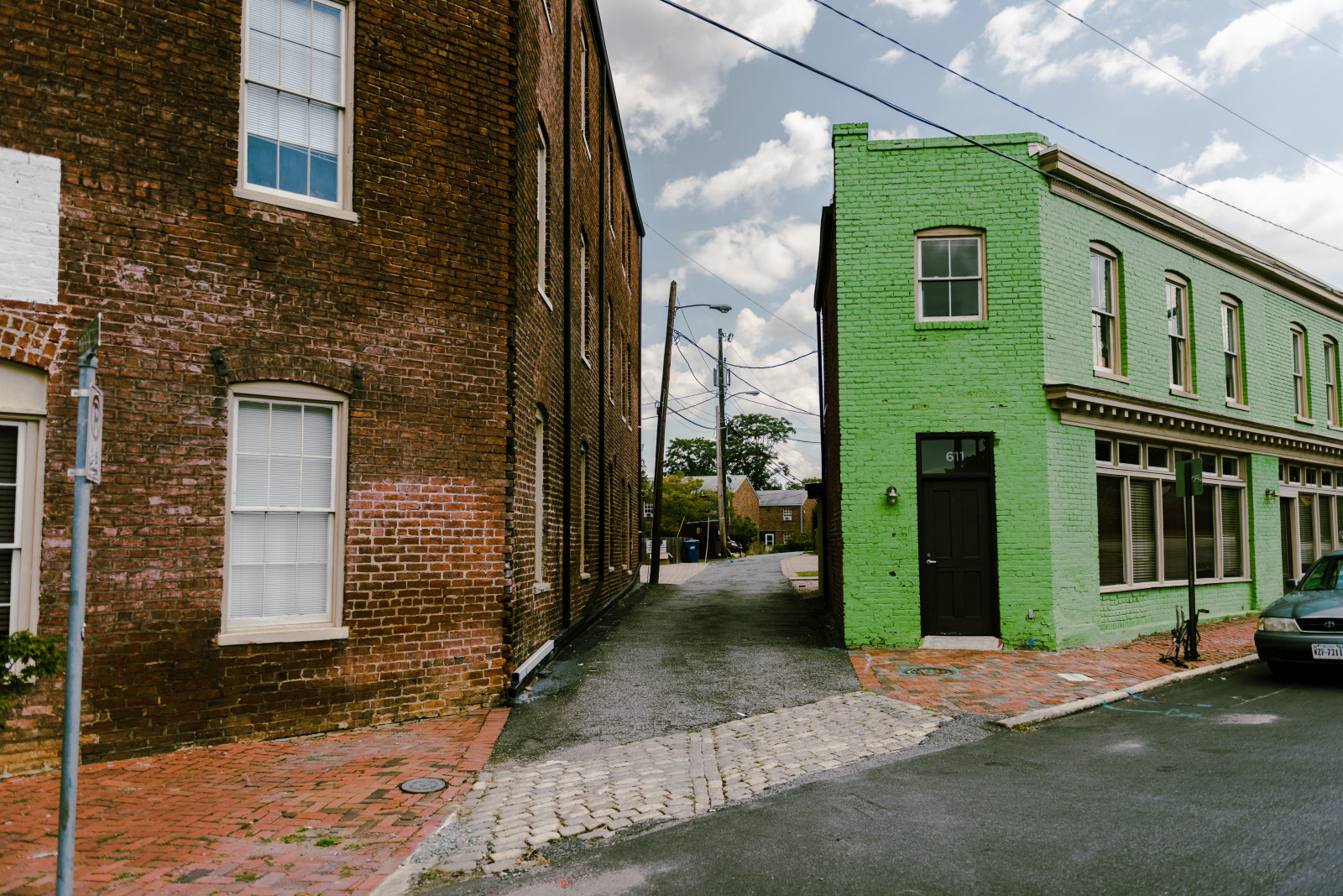 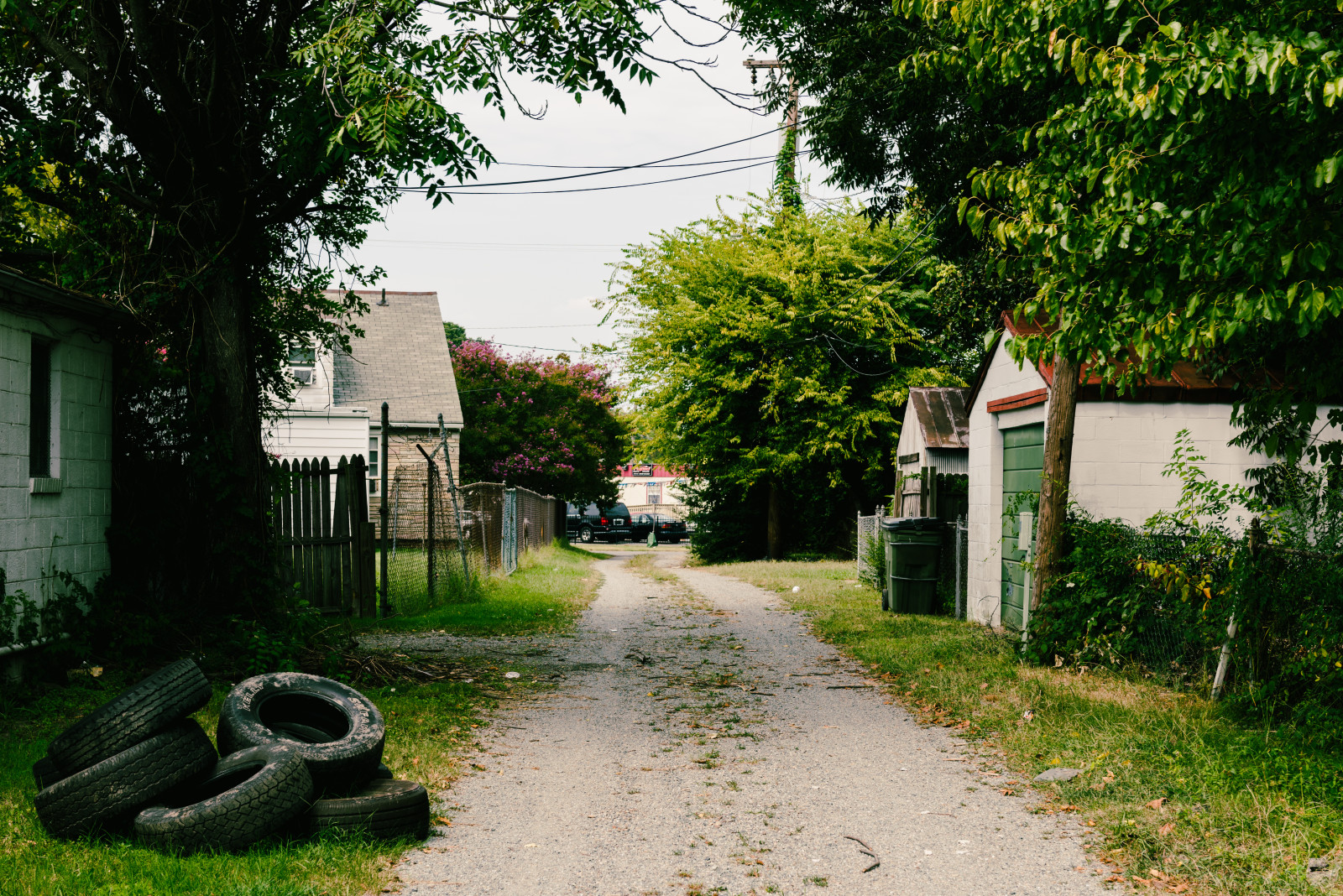 Between Northumberland Avenue and N. Lombardy Street, off of Wickham Street. 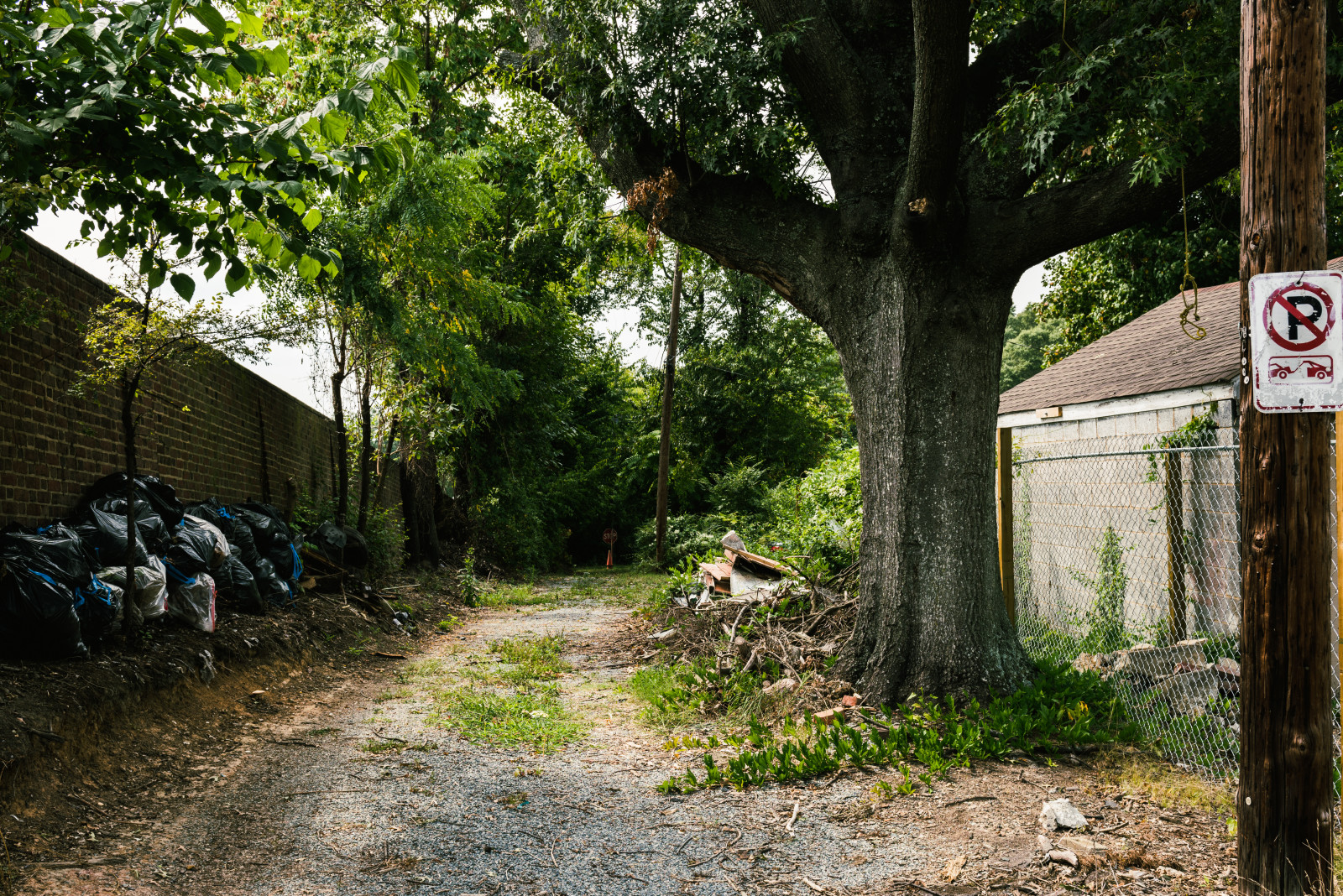 To the left of Althea Pkwy and to the right of Holy Cross Cemetery, off of 1st Avenue. 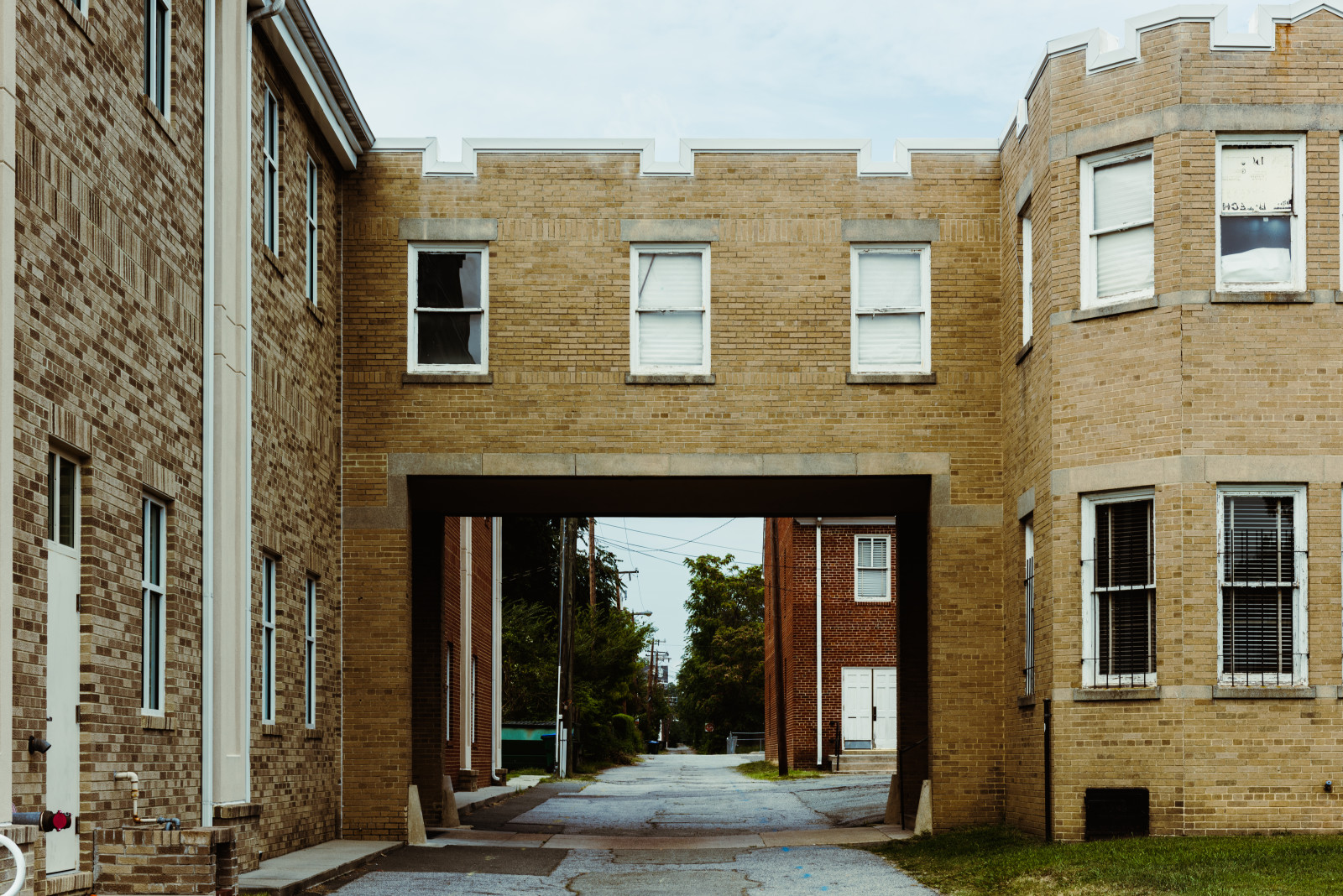 Between Althea Street and Cypress Street, off of 3rd Street on Northside. 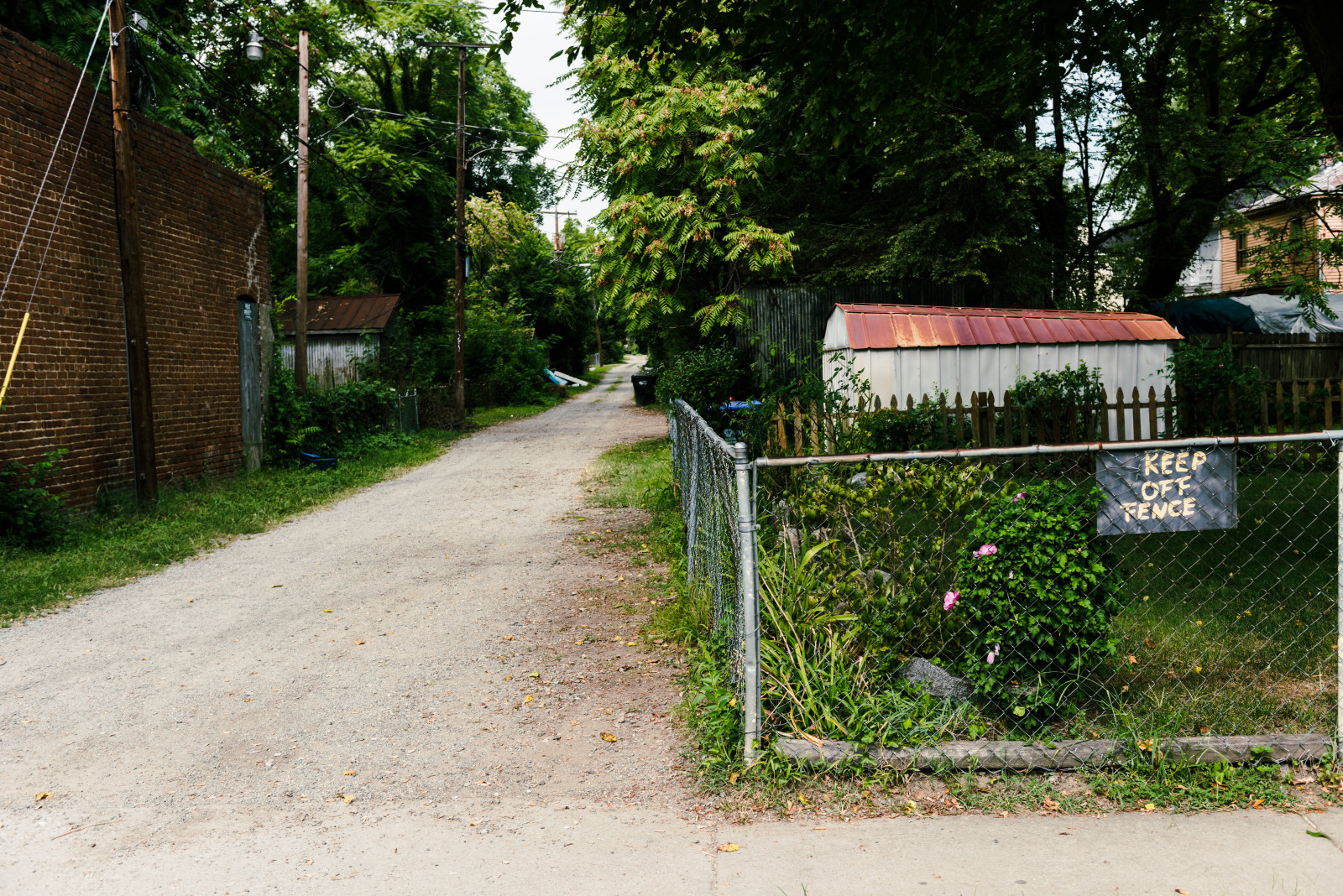 Between Enslow Avenue and Carolina Avenue, off of Meadowbridge Road

This alley is monitored 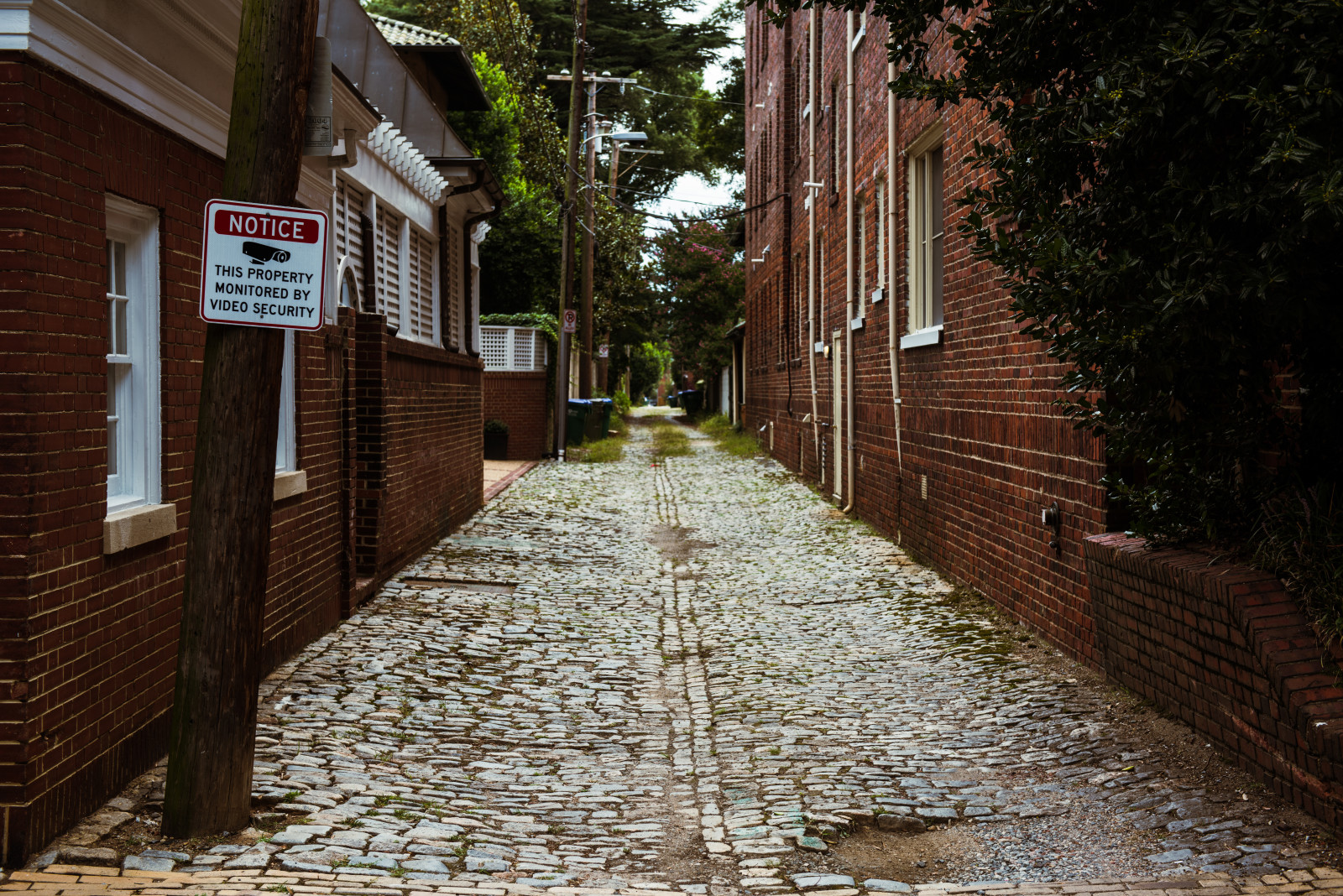 Between Monument Avenue and Park Avenue, off of N. Davis Avenue. 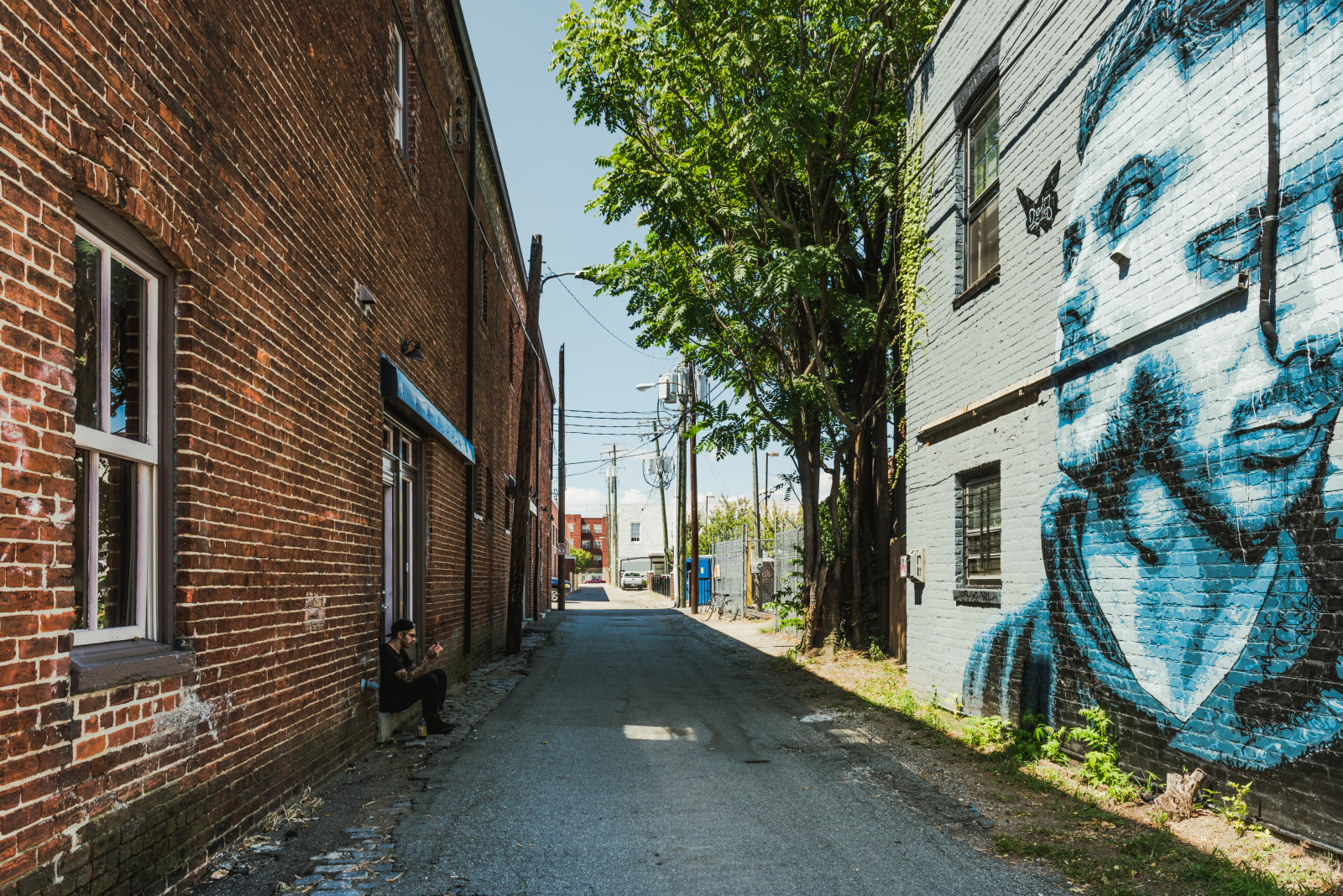 Between W. Broad Street and W. Marshall Street off of Goshen Street. 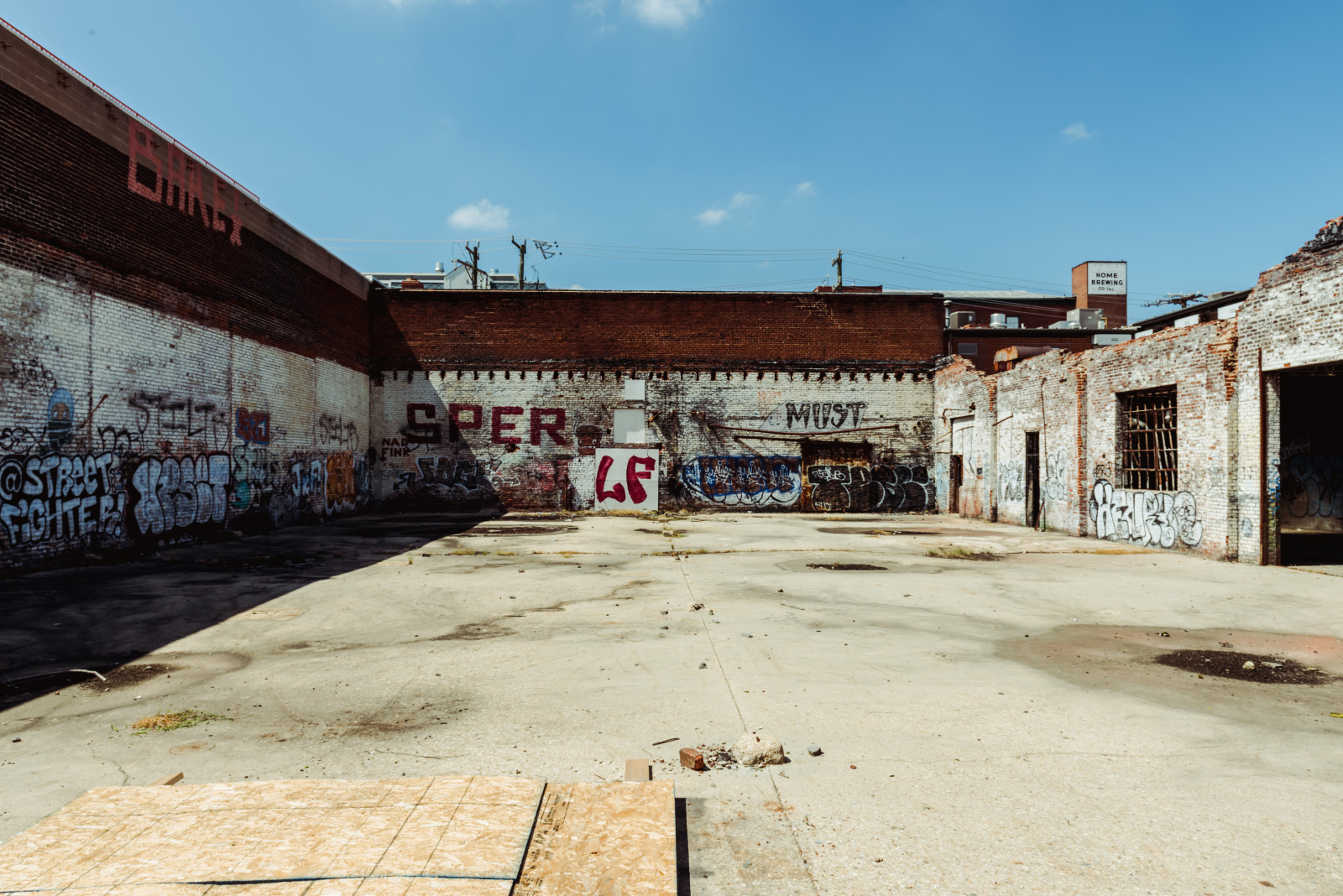 Between N. Hancock Street and N. Harrison Street, off of W. Clay Street. 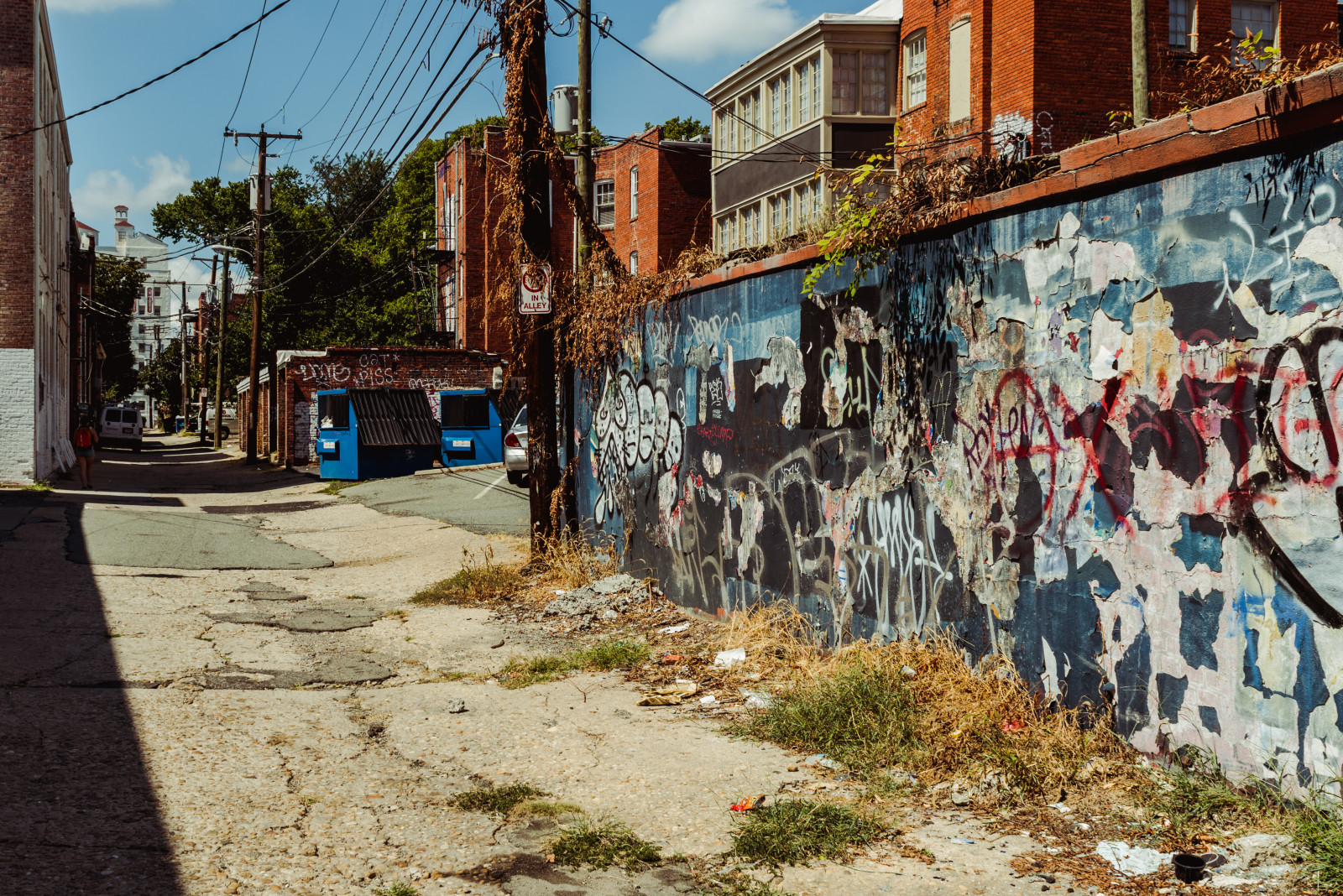 Between W. Grace Street and W. Franklin Street, off of Ryland Street.

Happy Xmas (War is Over) 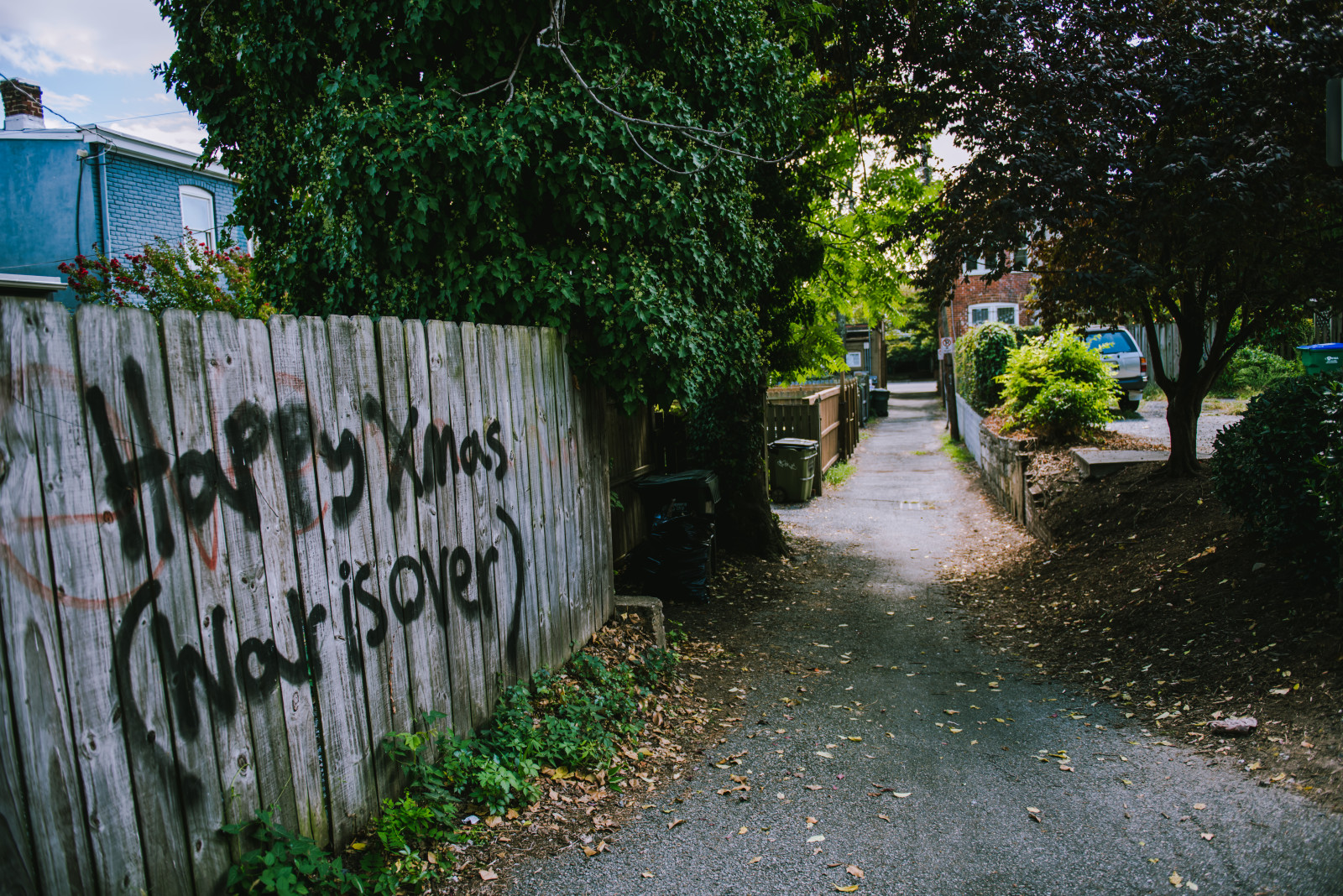 Between N. Lombardy Street and N. Vine Street, off of Floyd Avenue.

Someone left the chicken cooking 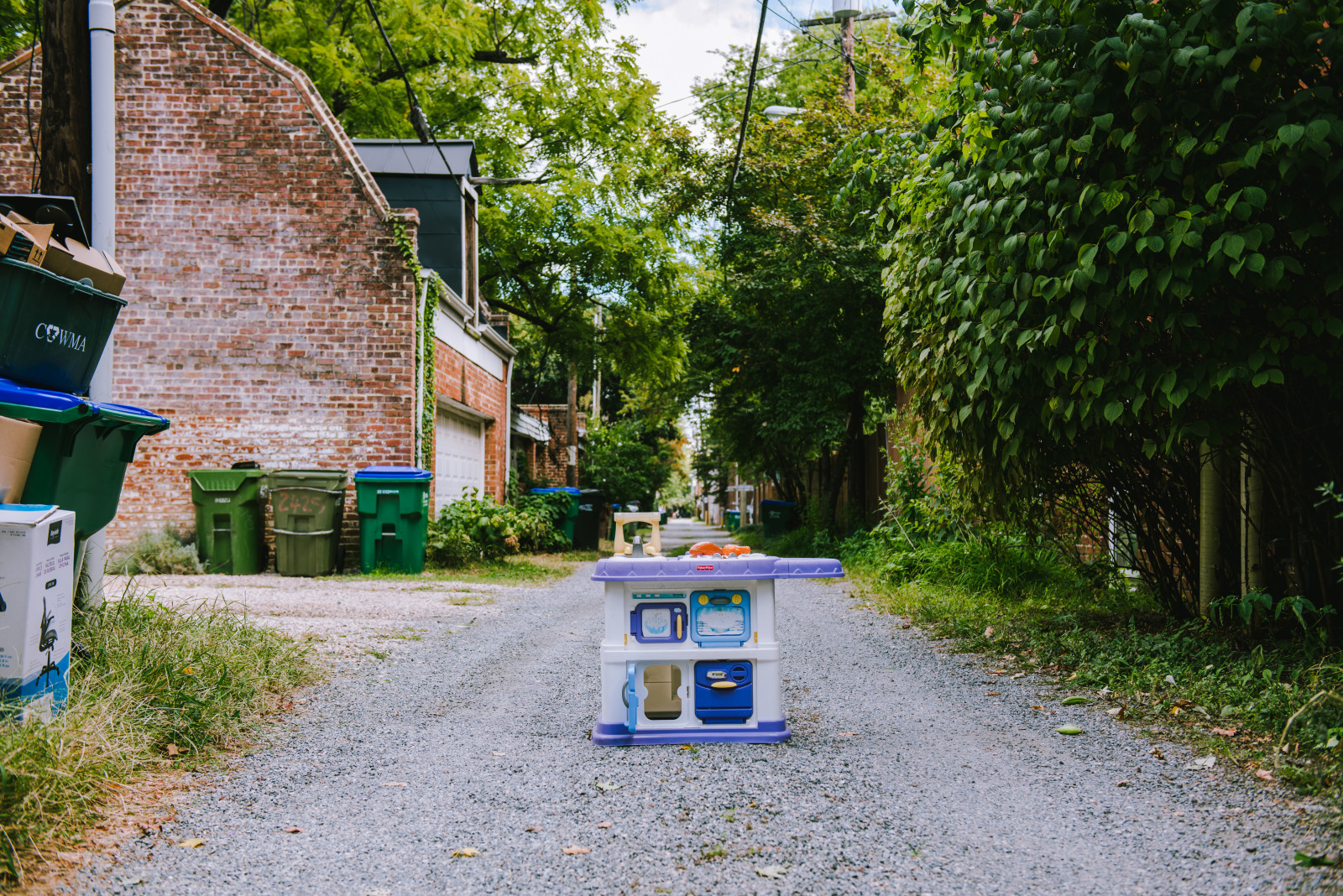 Between Grove Avenue and Floyd Avenue off of N. Davis Street. 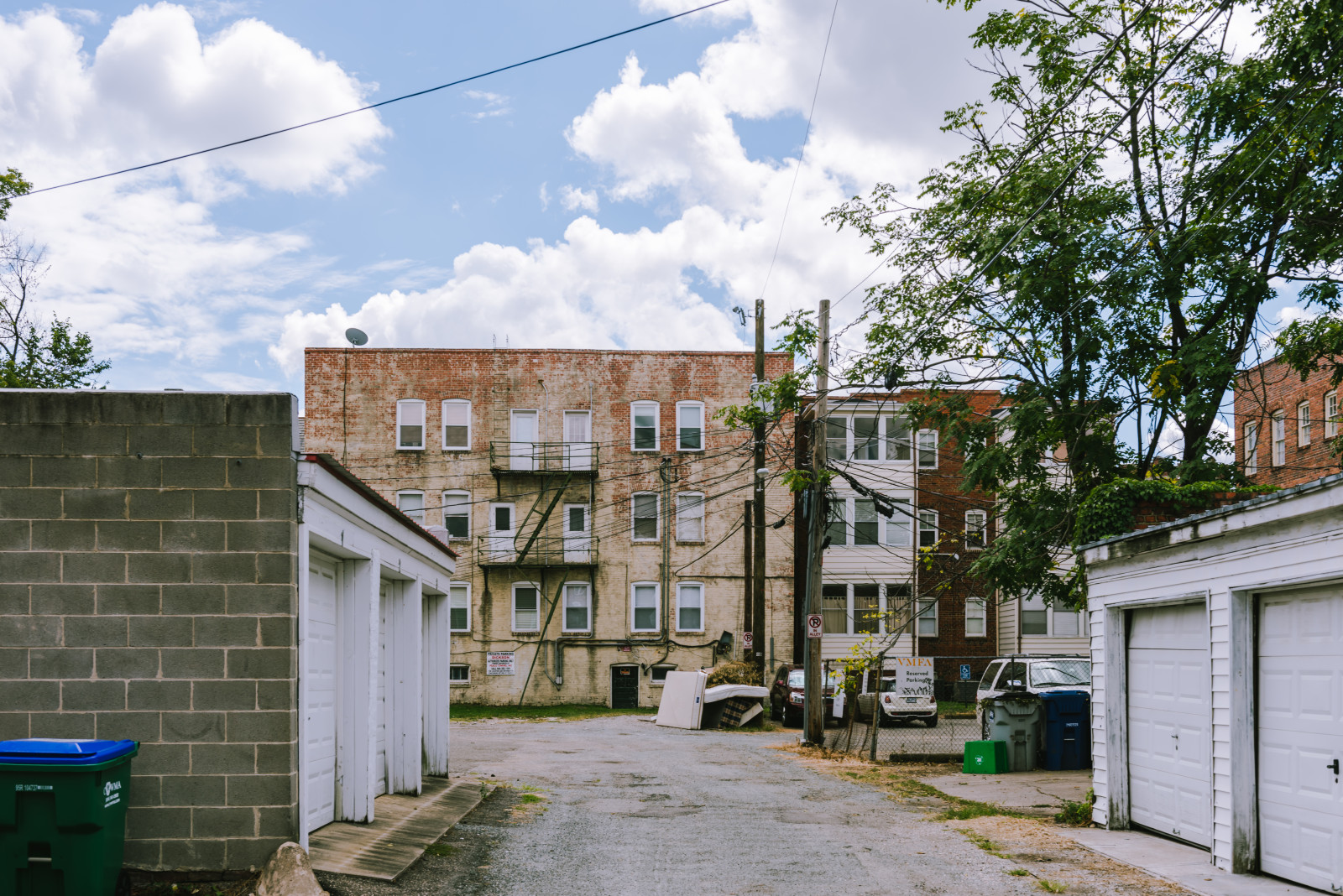 Between N. Mulberry Street and Boulevard, off of Hanover Avenue. 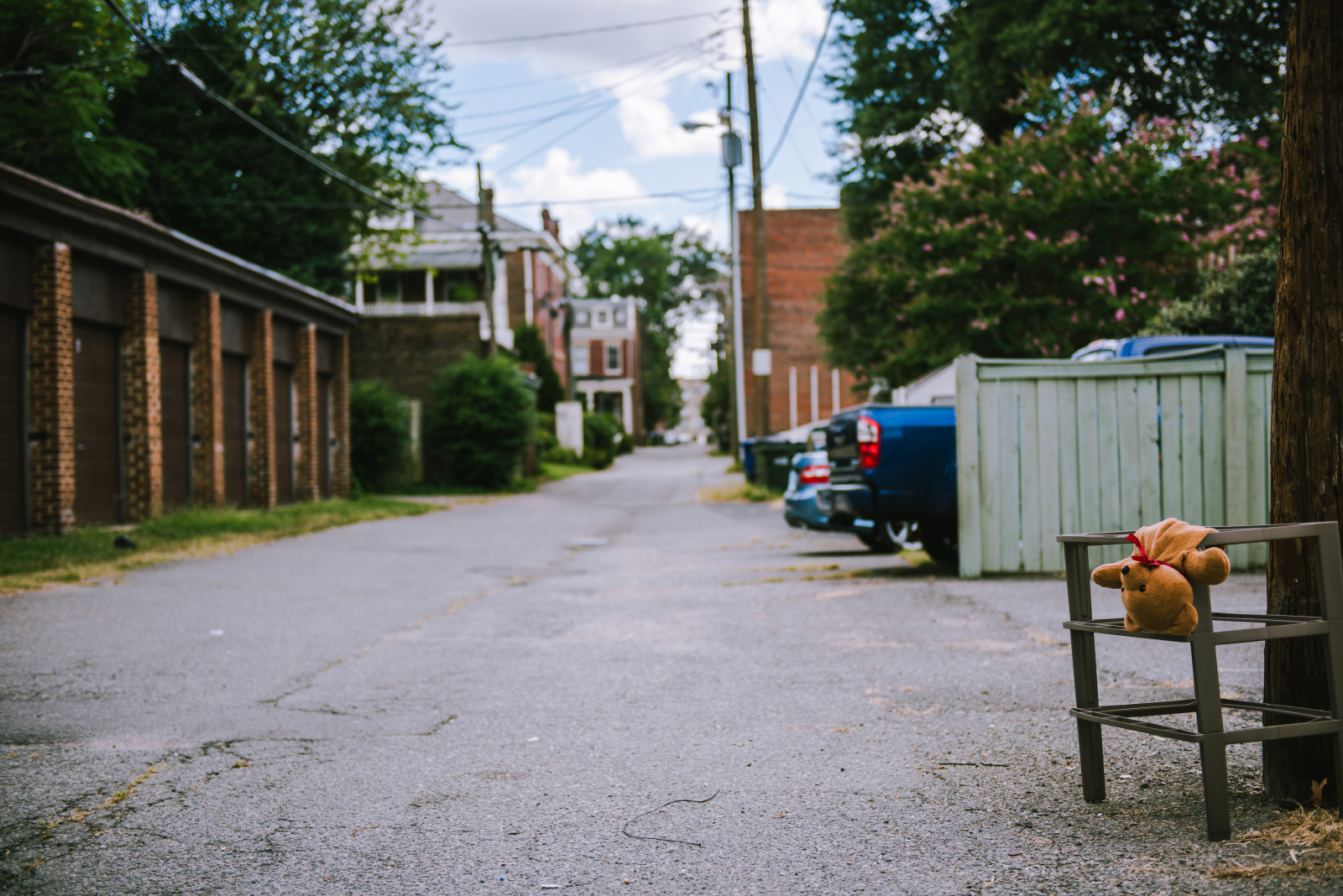 Between N. Mulberry Street and N Boulevard, off of Kensington Avenue.

The color of brick 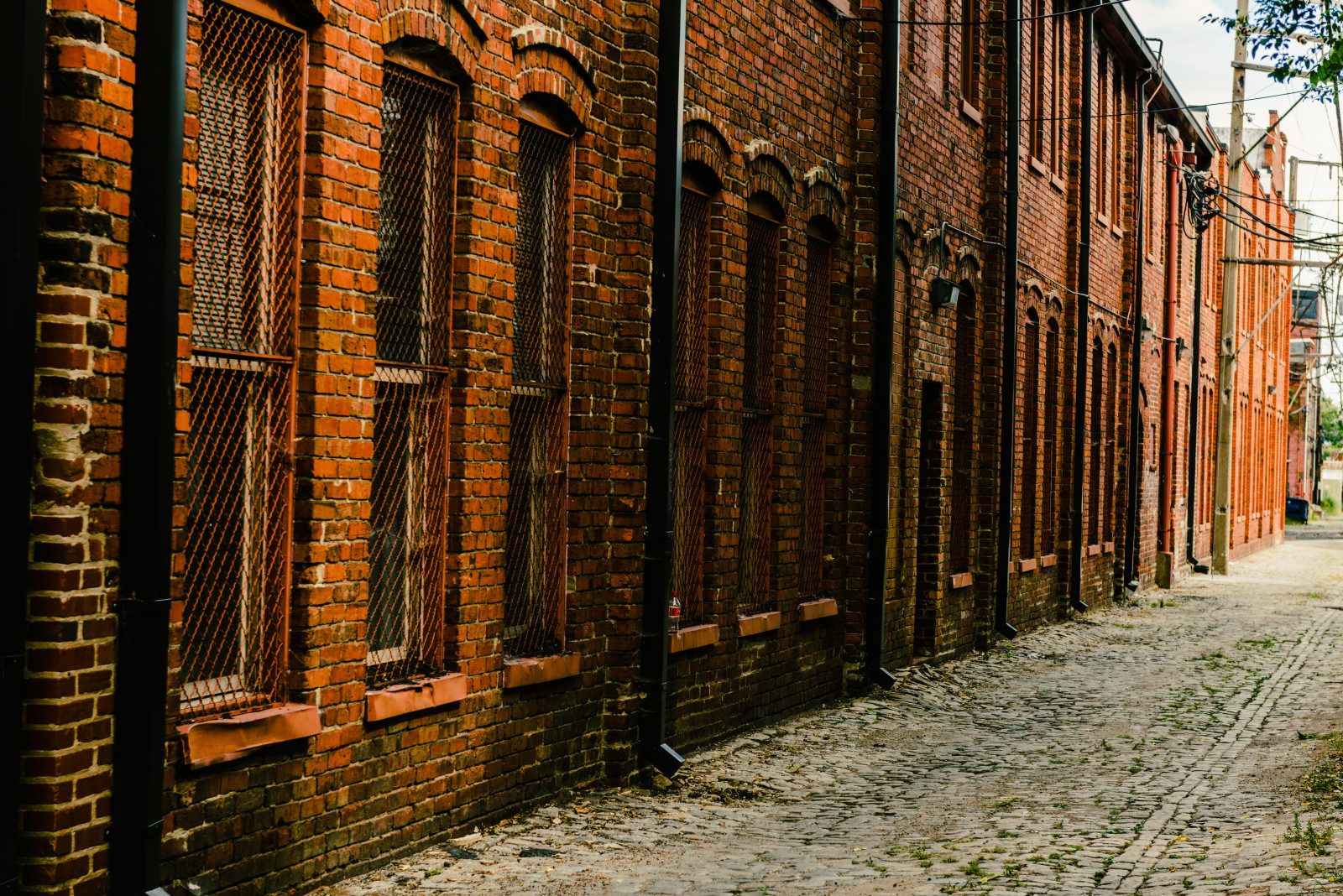 Between W. Broad Street and W. Grace Street, off of N. Allison Street.

After biking through Richmond alleys, I have found a new appreciation for cobblestone and its effects on my seat. When I began riding around the city, I had all the intentions to bike its entirety. As I weaved in and out of alleys, photography equipment weighing heavier and heavier on my back, I realized that this was a feat that would take me considerably longer than my deadline. I decided to focus each day of the week on a different part of RVA and get as much as I could done.

My first day began in Shockoe Bottom. I must say my great fondness of cobblestone was truly realized while zipping down hill and then back up again. The thing about cobblestone is that it doesn’t get any easier at any speed. There were a few close calls, sharp corners and there was the constant threat of distracted drivers, but I made it.

I was really impressed by some of the alleys in Shockoe. Some, like “Glorified Alley” and “Little Todd,” were really beautiful and kind of eerie in their state of relevant cleanliness. There were others, however, like “Kat Piss” that reminded me I was still, in fact, in a city and shouldn’t be spending so much time hanging out in alleys.

Northside was my next destination. I hadn’t spent a lot of time in this part of town and wanted to give a truly fair representation of Richmond alleys by hitting as many diverse locations as I could. When I set out from my home, I passed through Gilmer and was very happy to find an incredible scene. “Brothers in the Gilmer Alley” were walking towards me. The younger brother, holding his books was confused by me taking photos, and his older brother kept turning around to see exactly what it was I found so fascinating. By then, I was feeling pretty great about how my day was going and was honestly expecting to capture even better scenes. Unfortunately, as I rode through neighborhoods on the northern side of Interstate 95, I found myself with grassy alleys like “Car Tires” that didn’t prove to be very interesting. After being stopped several times and asked to explain what I was doing and why I was in the neighborhood, I was regaled with stories of disorderly neighbors and how they leave their grass clippings and trash in the alleys, (see “No Parking”). Though I didn’t quite get the photos I wanted, I was able to get a feel for a part of the city that had been until that day, alien to me.

On the third day I traversed the wilds that is the Fan district. In the Fan, I found myself surrounded by alleys, some unique and some gentrified. From college students to expressive graffiti, I found that the Fan, with its diverse culture and heavy flow of traffic, offered the most in regards to what I was looking for creatively. In fact, I had several people try and help point me towards interesting alleys. Though I never found any of them, I appreciated the sentiment.

There were other scenes that seemed so surreal that you’d think someone knew I was out photographing alleys and set them up just for me, like “Someone Left The Chicken Cooking” and “Lonely Bear.”

Though I did a lot of riding, lost a bit of weight, and acquired some new bruises, I wasn’t able to fully photograph all of Richmond’s wonderful alleys. I do, however, hope I was able to express my experiences traveling through the city and the fun that I had. I hope you take from these photos what I took from the cobblestone–though the road can get extremely bumpy and uncomfortable, the ride is always worth it if you gain an experience that you can share.