From the makers of Coraline…it’s Paranorman! The film that will not be on anyone’s lips nor be the buzz at any festival because, to put it gently, it doesn’t know what the crap it’s trying to be. 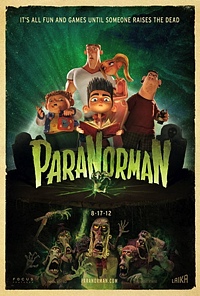 Paranorman is a gorgeous stop-action piece of work about a boy who can see and hear ghosts. Everyone, and I mean EVERYONE, thinks he’s a freak, with the possible exception of his mother, although she’s not really doing much to help the situation. As if it weren’t enough that he gets pounded at school and upbraided at home, Norman is treated to terrifying visions of fire and corpses. The town where he lives, Blithe Hollow, appears to have very little that’s blithe about it. Its gaudy hat-and-broomstick witch logo attracts tourists, who will (the town hopes) buy some spooky fridge magnets while they shudder gleefully at the story of Puritans vs. An Unlucky Girl.

A clear spoof on Salem, Massachussetts,1 Blithe Hollow revels in its witchy history. The kids act out the trial in a school play, a witch statue adorns the square, and the little boy named Norman has to stop their witch from raising her long-dead accusers from their graves. Just like any good old American town. Paranorman tries to turn the tables on us a couple of times–was the witch really bad? Were the accusers just scared? Do Blithe Hollowians need to just accept kids who are different instead of grabbing the nearest pitchfork and lighting the nearest torch? Does it all form a neat parallel with the town’s reception of Norman?

The answers to all of those questions (except that last one) are harder to come by, I think, than the filmmakers would have you believe. I’d be quakin’ in my boots too if a little girl could…well, you’ll see what she can do. It’s like we’re being asked to feel sorry for the girl from The Ring right at the moment her clammy arm thrusts its way out from the TV screen. Our loyalties are confused at best, and the message is muddled.

As a children’s movie, Paranorman’s textures, colors, and much of its humor will surely dazzle young minds. It’s just that after all that dazzlement, those young minds will lose control of their young bladders. This movie has some legit scary moments. If the overall gloom of Blithe Hollow and its surrounding forest weren’t spooky enough, the filmmakers do an excellent job of creating tension. Creepy yet not overly dramatic music accompanies rotting corpses as they lurch along in a chase scene that is, frankly, a little stressful. And, worse, townies are a tad too stoked to burn down whatever stands in their way. Any of this imagery would have troubled my sleep as a child, but none more than the idea that family and friends can just turn on you.

As an adult’s movie, Paranorman misses the mark by just a hair. It’s no stretch to appreciate the animation for its intricacy and obvious craftsmanship, and there are really funny parts for adults to enjoy. The same parts that would scare the kids would intrigue us, especially since we didn’t expect this level of seriousness. And we’d feel real sympathy for Norman’s troubles. The majority of the jokes, though, aren’t quite funny enough. The scary parts aren’t all that scary, and the themes, as I’ve mentioned, are quite a bit garbled.

The end result is a movie that’s pleasant but a little confusing and more than a little forgettable. Poor Paranorman is cursed with unawareness–it’s not sure what it’s trying to say and it’s not sure who it’s saying it to.2

You’re neither man nor child. You’re a manchild. Or maybe, like, a pre-teen.

You’ve got your kid to entertain, and physical comedy with corpses isn’t exactly his/her thing.