Only God has time to forgive, the rest of us lowly humans spend our time chopping off the limbs of those who’ve wronged us. American criminal expats Julian (Ryan Gosling) and his brother Billy (Tom Burke), live in Bangkok running a youth boxing club. One night, brother Billy wanders out into the Thai night looking for some trouble and ends up killing a prostitute.1 He’s arrested by the police who then allow the prostitute’s father to exact some deadly, skull-crushing vengeance on Billy. Officer Chang, the badass in charge, is quick to mete out some amputational vengeance of his own on the girl’s father for allowing her to remain a prostitute. He does so with a samurai sword. Crystal (Kristin Scott Thomas), Julian’s mother, arrives to collect her son’s body and get her own revenge on the man responsible for Billy’s death and on Chang who allowed it to happen. 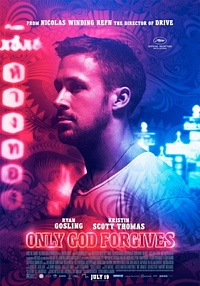 That’s a lot of vengeance. Like the title says, only God has time to forgive, the rest of us lowly humans spend our time chopping off the limbs of those who’ve wronged us. At least, if our lives are anything like those in Only God Forgives, we’re doing it in incredibly stylized way.

OGF is directed by Nicolas Winding Refn, director of Drive, a movie that I thought was one of 2011’s best. OGF takes all of the things I loved about Drive–a rewarding slow burn, an exceedingly rich atmosphere, an awesome soundtrack, The Gos–and doubles (or triples) down on them. The slow burn becomes a glacial freeze with long, fifteen second pauses before characters react or deliver lines. The atmosphere is filled with intense primary colors like something out of Apocalypse Now but on (more) acid. The soundtrack is no longer simply driving but a continuous droning pulse. The Gos is still the Gos, just with more staring and smoldering.

But, dudes, I don’t think it works! It’s too much–or too little, depending on how you look at it. Drive’s intense and awkward pacing makes you feel! OGF’s nearly unendurable shots make you feel like you should be watching Orange is the New Black instead.

Let me be clear, my criticism is NOT that this movie lacks substance or story. There’s a lot going on and a lot to think about despite the lack of dialogue and action. The film is packed with symbols, and the use of color throughout is thought provoking.2 And Kristin Scott Thomas! Such a good (evil, really) foil to Goslings utter flatness. Honestly, I’ve been thinking about the movie since I saw it.

However, that doesn’t forgive what feels like a masturbatory and gimmicky use of a pacing…only God can forgive that.

I walked out of the theatre one-starring this movie, but over the last couple of days it’s grown on me. I think the reason is two fold, 1) I’ve probably forgotten how unnecessarily slow most of this film was, and 2) there really is a lot to think about. I’m so close to saying “your mileage may vary,” but in reality, no, no it will not. You will not like this film.

Only God Forgives is packed with ultraviolence. If blood, gore, amputations, and severed rib cages aren’t your thing you may want to avoid. Also if watching a still shot of a group of men sitting in chairs for three or four minutes doesn’t sound like the best of times you can always check out Orange is the New Black–it’s streaming on Netflix.

Not really. Crystal has a brief conversation with a prostitute named Mai about what she does for a living, but it’s mostly in the context of Julian.