Drive: This is not your average car chase

Ryan Gosling delivers yet another unforgettable performance, this time as a dude who drives cars. But don’t worry, there’s so much more to it than that.

Drive was so good, I almost don’t want to talk about it. Danish director Nicolas Winding Refn combined the story arc and graphics of a seedy 80’s action flick with the careful shot-by-beautifully-constructed-shot feel of a 2011 thinkpiece. Add a liberal sprinkling of tension and hire one of Hollywood’s most promising actors, and you’ve got yourself a supremely watchable — if a little gory — film that makes boring, overblown, CGI-laden flicks even less acceptable. 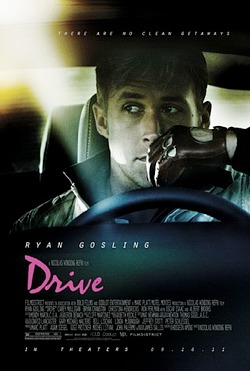 Nobody drives a car into a helicopter in Drive; the car chases are simple, suspenseful, and almost elegant. They should be, because that’s all the unnamed main character does: drive. His life revolves around driving. He’s a stunt driver, a getaway driver, he drives people home if their cars stop working, he works on cars so that they’ll drive better…when his neighbor Irene (Carey Mulligan) asks him what he does, he answers with just that. “I drive.”

The driver doesn’t seem discontented with his life, but he doesn’t seem happy, either. In fact, he just sort of exists, playing a bit part in other people’s plots (both real and fictional). It’s Irene who brings out the initial hints of bashful emotion in him, and he avoids it at first, probably not knowing how to be anything but a nameless, rootless driver.

Irene’s got a son, and that son has a dad. The driver’s loyalty to Irene is so steady, he agrees to help the dad out of a tight and dangerous situation. Things don’t go so well, and some scenes of very off-putting violence follow that are bound to turn off some viewers. There are some less-than-classy things going on in LA, and Drive makes the point that it doesn’t have to be a slick, sexy diamond heist that drastically changes lives. Small-time producer Bernie Rose (Albert Brooks) and Nino (Ron Perlman)* get things done however they can, no matter how much ugliness is involved, and the driver, who finds himself tangled up in their game, just makes the moves that will get him out of it as quickly as possible.

Or does he? We have a few indications that the driver doesn’t half mind pummeling baddies into a bloody pulp, and sometimes it seems that he downright enjoys it. Used so often as a pawn in other people’s lives, it feels sometimes like he’s acting on super-violent autopilot. It makes you wonder what sort of life he’s led up until this moment that would cause him to make such efficient work of a murder.

Though they never say much to each other, Irene and the driver’s emotions almost visibly start to become a knotted-up mess in contrast to the pure, almost glowing, affection they instantly felt for each other when they met. And I do mean “glowing,” Refn uses light all over the place, to highlight happiness, to shade trouble, and to enhance tension. It’s all very Noir, and without it, or any of its other engine parts, Drive wouldn’t be nearly as compelling a ride.

*Some may remember him from Hellboy, but I choose to dreamily think back on the excellent and weird TV series, Beauty and the Beast.