One Earth 2011 at the Landmark

Take advantage of a chance to see something truly, truly special, and check out the Japanese percussion-based performers on March 17, brought to you by the Modlin Center for the Arts. Because St. Patrick’s Day is every year, but Kodo is forever.

A few years ago, I got tickets to Kodo, the Japanese percussion group, for myself and a friend of mine. At the time, we weren’t exactly experts in all things Japanese, but we WERE experts in one very important thing Japanese.

Get ready to judge…

Yes, we became rapidly addicted* to TDM, which is based on a popular Japanese arcade game and involves banging a round plastic drum to bad covers of songs like “Toxic” and “My Sharona.” I thought it would be a funny gag to take her to see some real taiko drummers, but I don’t think either of us had any clue what would be waiting for us at the Landmark that night.

Kodo isn’t just a musical act, it’s a performing dance troupe, a stunt show, an art piece, and a cultural exhibition. I promise you this: you’ve seen a lot of things, I know, but you have never, ever seen someone put their entire being into their work like these people do. And it’s definitely the entire being. Intense concentration and a ripped physique are the necessary components of a Kodo drummer, who could confidently claim the label of athlete. Not only that, but each member of the group has to wield all of those muscles as gracefully as if they were performing a ballet. Oh, and super quickly. Usually in loincloths. 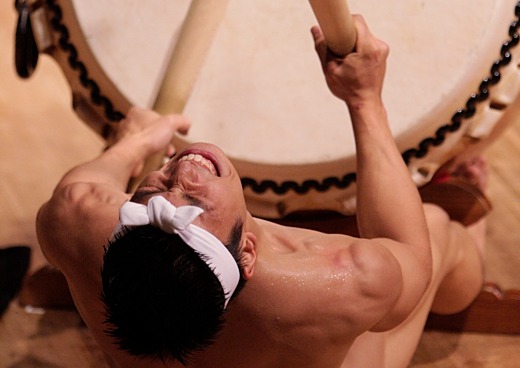 From the first beat of the first drum, it’s like someone turned on the switch to a ten-story waterfall of energy destined right for the top of your innocent little head. This stream narrows and focuses during slower songs with larger drums, but the intensity is no less palpable. Each movement of each musician is choreographed, and we, at least, had never seen anything like it before.

This year, the Modlin Center has again done us all a huge favor and brought Kodo back to our fair city. The group’s One Earth 2011 tour celebrates their 30th year of doing what they do while also promoting their new album, Akatsuki.

In ancient Japan, drummers marked the boundaries of villages and summoned its residents to gatherings. Kodo’s plan is to spread that community aspect to each corner of the earth, creating its own gatherings of its own villagers. With these new performances, the group vows to “turn audiences into one big village from Asia to South America,” while always staying true to their commitment to the Japanese tradition.

And let’s just be clear, this isn’t just some guys and gals tapping on drums the size of the plastic ones we smacked, trying to get a perfect score on “Lady Marmalade.” The drums range from tiny taikos to the colossal o-daiko. And let’s be clear here, I use “colossal” to describe a drum that weighs in at 900 freaking pounds. And it’s not just drums that you’ll hear—the group employs the traditional Japanese shamisen, koto, and kokyu, as well as their own voices.

I couldn’t be more excited to see Kodo again. The global focus of the One Earth 2011 tour promises to be an even more inspiring couple of hours than it was for my young, game-addled mind so many years ago.

Kodo will be performing on Thurs, March 17 at the Landmark at 7:30 pm. Buy tickets online or call 1-800-745-3000. I recommend bringing earplugs to wear if you’re feeling a little fragile during some of the louder pieces.

* An addiction I don’t recommend unless you have a freestanding house and very, very tolerant housemates.