Mud is one of those “slice of Southern life starring Matthew McConaughey alright alright alright” flicks. Luckily for ol’ director Jeff Nichols, that specific genre is getting better and better, allowing we viewers to take it more seriously. McConaughey does NOT, I repeat, does NOT play a laidback guy with bongos, and I’m starting to wonder if…could it be? Could that guy have some depth? 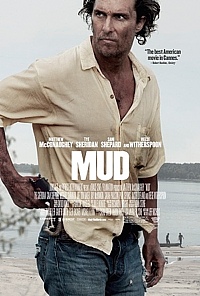 Let’s assume he does, and he’s just been toying with us by flip-flopping his way through Hollywood in a series of terrible romantic comedies. Let’s assume Jeff Nichols, a deep Southerner himself, saw some potential and just knew McConaughey was the man to play his slightly crazy, definitely manic scrappy fugitive. Mud (that’s his name) is staying on an island in the middle of the Mississippi, trying to figure out a way to get around the law. He’s been living in a boat left in a tree by a flood. A boat in a tree is “a helluva thang,” as he calls it, and a thang which has, naturally, attracted the attention of two 14-year-old river boys, Ellis and Neckbone.

It feels a lot like an episode within Huck Finn: boy who needs father figure meets possibly loony island squatter, squatter has a lot to say about not much, boy gets involved with his predicament, boy is in way over his head. Mud’s special lady is named Juniper (Reese Witherspoon), who is waiting for him in a motel next to a Piggly Wiggly, the worst possible kind of limbo. Their relationship is foggy, but Ellis doesn’t need a whole lot of explanation, as he’s more than ready to fill in the gaps himself. His own parents are talking about splitting, he may have to leave his beloved river, and a girl who he thought was The One turns out to be The Bitch. Ellis needs a love transfusion pretty damn fast, or he’s going to become one bitter Arkansan.

Mud feels good. It’s pretty, with a nice river palette of greens, greys, and browns, and the way Ellis’s small town is represented is neither too grimy nor too idealized. It’s just home, and he may never crack a smile, but it’s easy to see that he loves it. He loves Mud, too, and Juniper and everything else that he deems worthy, which is why he keeps getting let down. It’s a coming of age story that is easily relatable, solidly told, and surprising in lots of different ways. Excellent.

Now go back and remove all the machismo. Juniper! She’s literally either crying, grocery shopping, or waiting by a phone everytime we see her. Oh wait, I forgot that one time where she’s being smacked around by a dude. She’s so helpless as to be unsettling, and Mud, her helluva thang, intends to dash in on a gallant steed of a boat and rescue her somehow from her motel balcony. (The plan’s got big holes, but that’s the point).

Then, tie up some loose ends. We’re left to infer a lot of things, and normally I’d be totally OK with this, but there are plenty of details that don’t connect in a way that just feels sloppy. Mud and Juniper, Mud and his lifelong friend who happens to be Ellis’s neighbor, Neckbone and his uncle, Mud and his weird lucky shirt…the list of confusing aspects is annoyingly long.

Finally, take out most of the lines that say something about love. “I’m doing this for you because you love each other,” is a repeated theme. And I mean that literally. Ellis verbally repeats that in many of his scenes. We get it pretty quickly, and then we get it again. And again and again.

Boom! You’re all set with a fantastic movie that will simultaneously ask you to think, emote, and even laugh.

You need a teensy reminder that there’s a whole lotta love out there in many different forms.

Guys, terrible news, love can and will fizzle and die. And there’s nothing you can do about it. Chew on that for a spell.