Mission: Impossible–Ghost Protocol, A mission none too shabby

Tom Cruise is back (no, seriously) as Ethan Hunt in this fourth installment of the Mission: Impossible franchise. His abs are still ripply.

First: I’m not Susan Howson. Our preeminent movie reviewer is off carefreely cavorting with her new child while on maternity leave; this leaves me in charge*. For the foreseeable future, I will try to fill her knowledgeable shoes and fill your minds with insightful reviews. 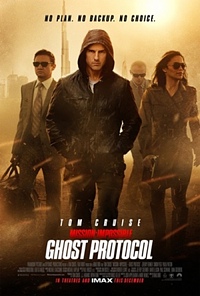 Ghost Protocol is, something like, the fourth installment of the Mission: Impossible series, which began a long time ago in 1996. Back then Tom Cruise was busily starring in every megasuccessful movie cranked out over the previous ten years**. When I first heard that he was starring in a new M:I movie (which, honestly, was yesterday), I thought for sure that Cruise had graduated from his role as Ethan Hunt, secret agent extraordinaire, to a more Obi-Wan-esque role: that of elder and teacher to a new, younger Padawan. In my mind, this young agent was played by Ryan Gosling.

But, no way Jose. Tom is back as the incredibly brilliant, athletic, and deadly*** Ethan Hunt, and the world has, once again, gotten itself into some trouble. ONLY THIS TIME IT’S PERSONAL NUCLEAR. The plot is best summed up with this line from the trailer:

“A bomb just blew up the Kremlin, the blame points to your team.”

Guys, remember the good ol’ days when the world’s worst enemies, out of all the enemies, were the ruskies? A time when Patrick Swazye and the Wolverines could inspire hope, and thin Alec Baldwin did some stuff on a submarine? It was a simple time, when the threat of nuclear war with the Russians was so clear and so evil that a trillion awesome movies were made. But, all good things must come to the end, so the Cold War petered out, and we’re left with “terrorists” as the next global bad guy. This made for sucky movies (except for the The Hurt Locker, which was awesome).

M:I-GP said to itself, “If we’re not at actual war with Russia, let’s gin up a situation where we’d have the threat of war with Russia!” And so, Cruise and gang–a nerdy technologist played by Simon Pegg, an angry agent seeking revenge played by Paula Patton, and a suspiciously handsome and well-built analyst played by Jeremy Renner (from The Hurt Locker!)–race around the globe trying to stop World War III. It was nice to see the Russians up to their old tricks again.

Director Brad Bird (The Incredibles, The Iron Giant), in his live-action directorial debut, delivers exactly what you’d expect and want in an action-packed spy film: exotic locales, improbable stunts, and futuristic gadgets. In fact, this might be the best James Bond movie I’ve seen in a long time. At some point, the Bond franchise went full smolder–especially the Daniel Craig films****. But with Simon Pegg providing the comic relief and a less-than-smoldery Cruise as the action star, M:I-GP feels really well balanced. Plus, Renner has enough smolder to go around.

While he’s not the most tortured of characters, Cruise still–somehow–has that boyish charm thing he’s been riding since Risky Business back in 1983. And, lo, you will feel no ill will towards this 50-year-old man as he leaps tall buildings in a single bound and smashes his face/body on anything in its path. But somehow, despite his rippling abs and youthful grin, Cruise spends way too much screen time running after an old, fat Russian dude–but never seems to catch him. Maybe the old, fat Russian is an allegory for Tom’s former success? Ooo, burn!

In the end, this movie is exactly what it sets out to be, and that, I think, is exactly pretty OK!

* Unfortunately.
** This is his filmography from 1986-1996: Top Gun, The Color of Money, Cocktail, Rain Man, Born on the Fourth of July, Days of Thunder, Far and Away, A Few Good Men, The Firm, Interview with a Vampire, Mission: Impossible, Jerry Maguire. It goes down pretty quickly from there, but dang! That’s a crazy list of hits.
*** Words that describe the actual Tom Cruise.
**** Quantum of Solace might get a pass, though. Daniel Craig had this to say in a recent interview: “On Quantum, we were fucked. We had the bare bones of a script and then there was a writers’ strike and there was nothing we could do. We couldn’t employ a writer to finish it. I say to myself, ‘Never again’, but who knows? There was me trying to rewrite scenes – and a writer I am not.”