Lou Hoff’s appearances have been limited since he moved to Richmond 18 months ago, but that is going to change when he retires from his job in December. Until December, we have some recordings to keep you entertained.

Lou Hoff’s appearances have been limited since he moved to Richmond 18 months ago, but that is going to change when he retires from his job in December. Last night he made a rare appearance at the VMFA Jazz Cafe. Steve Kessler (piano), Andrew Randazzo (bass) and Russ Helm (drums) joined him as the quartet entertained a packed house of more than a hundred listeners. 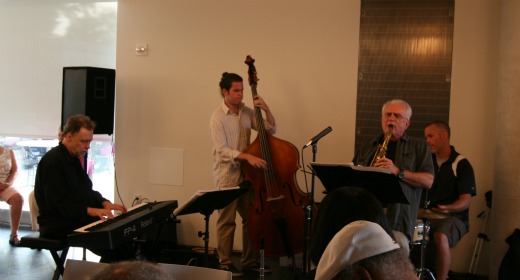 Focusing on jazz standards, the group explored such tunes as “Stella by Starlight,” “Someday My Prince Will Come,” “Well You Needn’t” and a burning fast version of “Oleo.” I can’t even begin to describe how fast “Oleo” was. Hoff took the occasional break from alto saxophone and played flute on a pair of latin tunes. His flute solo on “No More Blues” was extremely convincing, especially with the drum and bass interaction between Randazzo and Helm.

While Lou Hoff captivated the audience, the true star of the night was pianist Steve Kessler. His endless ideas and unique phrasing offered a new perspective on every tune they performed. Kessler’s solos told a complete story, something that was sometimes lost in the double time passages of Hoff.

It is always good to get out and hear a new group. Lee Hoff Quartet is definitely worth checking out.

All the Things You Are: