Living in silence: Richmond’s Club for the Deaf Two cars smashed into the vehicle David Sipple drove in 1989 near the old I-95 toll booth. Sipple was badly hurt.

He recalls paramedics lifting him onto a stretcher and strapping down his head, chest, knees, and feet. They also crossed his arms over his chest like a mummy and fastened them down before rushing him to MCV. In securing the injured motorist, the paramedics unknowingly silenced him.

His hands confined beneath the straps over his chest, Sipple was wheeled into the ER where a nurse bent over and began speaking to him. Like many deaf people, Sipple doesn’t read lips.1 He had no idea what the nurse was saying.

“I tried to point to my ear, but my hands were tied to my chest,” Sipple said. The nurse shook her head, unable to communicate with what she thought to be an unresponsive patient. She left Sipple alone to wait.

A doctor finally arrived. Again Sipple did his best to motion to his ear. “The doctor just looked at me and yelled into my ear,” he said.

“So I reached up and grabbed [him] and I tried to tell him I was deaf with my voice,” Sipple said. “He was terrified, backed up, and ran off.” Hospital security arrived to take away Sipple, whom they assumed was violent and dangerous. “I could have been taken to the mental health ward,” he said. But before he was wheeled away, an ASL interpreter arrived.

While Sipple harbors no visible anger toward the nurse or doctor he dealt with that day, his experience 25 years ago underscores the disadvantages faced by the deaf. The interpreter, thankfully, arrived before orderlies carted Sipple away. But what if the interpreter hadn’t? “To get an interpreter can be a long wait,” Sipple said. “Am I just going to wink in code to try and communicate what I need?”

For decades, the Richmond Club of the Deaf (RCD) has worked to help abate at least some of the adversity faced by Richmond’s deaf community. For nearly a year now, David Sipple has lead the club as president.

But now the RCD struggles to unite Richmond’s deaf community, especially its younger constituents, while the club itself remains homeless. Sipple finds himself presiding over a club passionate about deaf culture, concerned about isolated kids, and uncertain about its own future.

Talking in your language

“If it wasn’t for the Richmond community and RCD, I wouldn’t be here,” said Sipple, communicating in ASL through an interpreter in the local offices of Purple, an organization that provides video relay services (VRS). 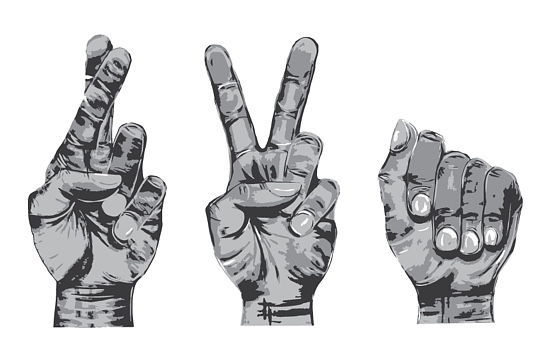 Local freelance artist McLean Jesse designed the shirt. Find her work at VCU, catch her class at Wine and Design at 2707 W. Broad Street, and check out her website, Mclaintings.

An aviator engineer, Sipple moved to Richmond from Maryland to work out of his company’s local office. “I have retired,” he said. “So if it wasn’t for the community, I would have not stayed.”

He became an RCD member shortly after moving to Richmond, has served as an officer for ten years, and been president for one. “We are about community involvement,” Sipple said about the just over 200-member club. “We do recreation,2 social events. We have different debates and political discussions.”

The RCD community extends beyond the region’s deaf. “Before folks become an [ASL] interpreter, they obviously have to learn sign language and we encourage them to become involved in the deaf community,” Sipple said. “They really need to be a part of the core deaf culture” to become fluent and skilled in their use of ASL.

Fostering deaf culture was the aim of RCD’s founders in 1947, when the club became the third chapter of the Virginia Association of the Deaf.3

RCD was the linchpin for the region’s deaf community through the 1970s. “For deaf folks, and their deaf children as well, you have your week, you go about your things just as everybody else,” Sipple said. “On weekends you go to the deaf club. You see everybody. You see your friends. You talk in your language [ASL] that you haven’t been able [to use] all week.”

Membership waned over the years until technology provided a boost. “On Friday nights, you’d get to watch films with captions and it was amazing,” Sipple said. “You had tons of deaf people show up for that because there were no captions on TV at that time. So all the deaf would come just for the captioned movies, and that would last for several years” until TV closed-captioning.

But technology later had a more deleterious effect on the club’s size. “I would say around the 1980s, when TV captioning first started to come about, the deaf club membership reduced,” Sipple said. Technology unintentionally tapered membership even more in the 1990s with SMS texting, giving the deaf an additional way to stay in contact without the needs of the club. “When those two pieces of technology came into play, the younger members were really the ones who started to drop out,” Sipple said.

Now with smartphones and apps like Skype and FaceTime, the deaf have never been better suited to remain in constant contact with their peers. “So that influences the membership because you can keep in touch that way,” Sipple said.

And it’s young people so attuned to technology that RCD members feel so disconnected from.

In the old days, deaf children in the area (as many still do) attended the Virginia School for the Deaf and Blind (VSDB) in Staunton, VA. “At deaf school, you are learning your identity as a deaf person within the context of the school.” That identity built on deaf culture was then reinforced on the weekend when children, home for summer, went to deaf club to socialize.

But that old model has changed. Nowadays, VSDB isn’t the only option for parents and students. “Other parents really hold their child back and do what’s called mainstreaming, elementary all the way through high school,” Sipple said. “They hold their child back with them here in Richmond.” While keeping deaf children connected to their local community seems well and good, Sipple said that when the cliques of middle school and high school emerge, deaf children easily feel isolated. And with smartphones, those children don’t feel the need be among their deaf peers at RCD. “When you’re mainstreamed as a deaf student, you just feel lost. You feel completely lost amongst all of that.”

That sense of disorientation carries into their adult life. “I see some folks who…they don’t really know who they are, those who have graduated from a mainstream program, and that is sad,” Sipple said. “That is very sad, and a very serious problem.”

Some years ago, RCD approached local schools to ask if the club could merely reach out to any deaf students at the school and simply say: “‘Look, I am a deaf adult…I’m like you. I work a day job, I have parents, I have a life,'” Sipple said. “And just expose them to the fact that they can be a successful deaf adult.”

Sipple said teachers of area deaf students loved the outreach idea. But the principals said no. “I don’t know why,” Sipple said. “How do we even convince the principal to let us come in?” and just make contact with deaf students. “It’s very important.”

Both as children and adults, the deaf inevitably fend off the ignorance of the hearing.

“Hearing people do tend to assume that deaf are mentally retarded or are intellectually disabled, or they use the word dumb,” Sipple said. “People feel like deaf are not important, or that they’re worthless. Nothing could be further from the truth. I was an engineer. We have deaf doctors. They take care of patients, hearing and deaf. We have deaf pilots. We have deaf drivers. We have deaf who own their own cruise ships and businesses.”

Yet often the hearing view the deaf as not normal. “Whether folks are born deaf or are born hearing, it doesn’t matter. We’re both normal. There’s nothing abnormal about being deaf,” Sipple said.

And while the deaf have made progress in the last century in how they’re viewed and treated, it’s not enough. “We need to educate the general hearing population more. They need to see the deaf as equals,” Sipple said.

But any future equality will occur on an unequal playing field that favors the hearing. “Deaf individuals have to buy special devices for their homes for the visual alerts if the phone’s ringing, if the doorbell is rung. So we naturally spend extra money just because we’re deaf for those features in our home,” Sipple said.

There are other inconveniences. Take your car. While driving, you may hear an odd noise rumbling in the engine. You take it to a garage and a mechanic fixes the problem.

But in the same situation, the deaf are disadvantaged. “I don’t know anything–unless it’s vibrating–until it’s broken,” Sipple said. “So that’s going to cost me a lot more to replace something than simply fix it.”

And while the deaf concede that they’ll likely always have to pay more for things, their unemployment rate does them no favors. “If a deaf applicant has applied, they are less likely to get hired than a hearing applicant, and that’s just a fact,” Sipple said. The deaf have an unemployment rate of about 75 percent. Of the over 300 million US residents, roughly nine million are classified as deaf or hard of hearing.

“Naturally you feel like you have to fight harder,” Sipple said.

And then there are the day-to-day interactions. Not long ago, Sipple was in a coffee shop. When at the register, he motioned that he was deaf.4 The cashier, confused, kept talking to him and even retrieved a barista to do the same, making a scene out of Sipple who just wanted a cup of coffee. Eventually the cashier caught on and provided him with pen and scratch paper to scribble his order.

But increasingly, these awkward social interactions are becoming the exception, not the norm. Recently, while Sipple was in a WalMart, he asked an employee for help. The worker actually knew some ASL, and communicated–albeit slowly–with him. “The education and exposure is starting to spread,” he said.

While creating a community for the region’s deaf is a constant priority, Sipple and RCD are most concerned with finding a permanent home. High rent at their old location on E. Broad Street have forced the club to assemble on an ad hoc basis since the late 1980s. “We’ve, in essence, become gypsies,” Sipple said. “We have to find different venues for our meetings, our parties, our gatherings, our events, so we kind of are transient and haven’t had a place to call our own for almost 25 years.”

Not only would a new club home provide stability, it would also give the club space to conduct mental health outreach, hold public seminars for various deaf-hearing relations, and provide a space for youth-centric events that, he hopes, would foster a new generation of Richmond’s deaf community.

Sipple’s said many Richmond deaf in their 20s and 30s don’t even know the club exists. “[But] once they find it, they jump in,” Sipple said.

But it’s hard to spread the word and gain members when you have no central location. The group needs no more than a 3,000-square-foot space with bathrooms, kitchen, and meeting hall. A place where the city’s deaf community can call home.

A place where deaf adults and children can feel less alone.