Chris Adler has been the drummer for Lamb of God since 1990 when the band formed on the campus of VCU. He talks about the origins of the group, making a living, and singer Randy Blythe’s arrest and month-long detainment in Prague. Chris Adler, drummer for Lamb of God, remembers the moments just before singer Randy Blythe was arrested in Prague, and the subsequent legal ordeal that jailed the singer for over a month.

“We landed in Prague at 7:00 or 8:00 PM,” said Adler of June 27, 2012. He recalled it took longer than usual for passengers to deplane. When the passengers finally made it into the jetway, the band and crew saw “two plain clothes officers screening people.” At first, Adler thought it was a routine security check. Soon it was clear who they were looking for.

When the band and its crew approached, the screeners whisked them away. “We’ll explain shortly,” said the officers. What happened next caused their stomachs to drop.

The band and crew were led into a room filled with men in ski masks clutching automatic weapons. “They looked like they were ready for the apocalypse,” recalled Adler. Officials handed members a piece of paper, in English, explaining what was happening: singer Randy Blythe was being arrested on charges of manslaughter, stemming from a 2010 Prague show.

During that performance, it’s alleged that a fan made it on stage and was subsequently pushed off by Blythe. That fan sustained a head injury and later died as a result.

“To us, it didn’t collide with common sense,” said Adler of the charges. With Blythe taken away by Prague authorities. Concerns swirled among band members.

First, there was the death of a fan. “That information in itself is difficult to process. That’s not what we ever wanted to happen,” said Adler. Thoughts then turned to Blythe, who was unable to communicate beyond the walls of his cell. “Now we’re worried about our friend stuck in jail.”

The band found Blythe legal representation, and were able to communicate with the singer through letters and lawyer visits. They were assured that Blythe was being treated well. With that assurance, Adler recalled a new question facing band members: “What the hell do we do?”

Many assumed that once bail was posted, Blythe would be released. He wasn’t. Bail was increased from $200,000 to $400,000, and then delayed, a confusing tactic to many on the part of Prague prosecutors, who said Blythe was a flight risk. Blythe’s lawyers filed multiple appeals to have the singer released. “It was extremely frustrating,” said Adler.

Days passed. Then weeks. For the band and crew, another matter arose the longer Blythe remained in jail: making a living.

“We cancelled a whole US tour,” said Adler. Deposits on buses, equipment, and other necessities for touring were forfeited. “It becomes a financial nightmare.” The 39-year-old added: “It makes one take pause and realize after 16 years…you fall into a pattern where it’s now become our job and our livelihood.” It certainly didn’t begin that way.

One can say that Lamb of God began inside VCU’s Johnson Hall in 1990 when Adler, guitarist Mark Morton, and bassist John Campbell met as freshman.1 Adler, then a mass communications major, said the group began playing “proggy” metal “that only Richmond can birth.” But they needed a name. The criteria, said Adler, was this: “What’s the heaviest, most evil thing you could come up with?” Their answer: Burn the Priest.

After recording a few demos, eventually Randy Blythe joined as singer. The band also organized makeshift tours. “It was never about getting a record deal and making it a career,” said Adler. It was about having fun.

In the late 1990s, young, tech-savvy bands began using the Internet. Burn the Priest was no different. At one point, the group accumulated 100,000 downloads on MP3.com. That caught the attention of record labels, which in turn “sent us into a different thought process,” said Adler.

With the prospect of a full-time band apparent, guitarist Mark Morton wondered aloud if Burn the Priest was a suitable name. “If we’re going to commit ourselves to this,” said Adler, recalling Morton’s logic “don’t you think we should come up with a name not as childish and stupid?”

As it so happened, Mark had a side project called Lamb of God. When that side project puttered-out, Adler and the others, who were fond of the name, decided to make it their own.

In 2000, while Adler worked as an IT director at a VCU surgery research lab, Lamb of God released New American Gospel. Some heralded the album as one that propelled Metal toward new horizons. Each succeeding album saw increased praise and sales. Touring, once done only for fun, was now the main moneymaker for the group and its members.

Lamb of God’s success could have justified members moving to New York City or Los Angeles, but they haven’t changed zip codes. Richmond, said Adler, is “very much our home.” But without a doubt, their home away from home is the road.

Blythe was released on August 3rd after over a month of imprisonment. On August 17th, Lamb of God played their first show following Blythe’s release, at the inaugural Knotfest.

“It felt like it was the first show,” said Adler. “It was a really energizing feeling” to be back on stage.

Adler said that typical Lamb of God performances begin with the audience thundering Lamb…of…God in unison. But during that first show back, band members heard a different chorus before taking the stage: Randy…is…free!

“It gave us all goosebumps,” said Adler. “It does make you realize how fragile [the band] is and how lucky we are.”

The band is now touring to support their most recent album, Resolution–the tour that was cancelled because of Blythe’s detainment. It’s the band’s first US tour since the album’s January release (Lamb of God will play The National on Wednesday, November 28th).

Blythe’s trial in Prague is set to begin in January. “He is fully intending to go there,” said Adler. “I know he really wants to do it.” He said that Blythe is confident of his innocence and that a jury will validate that innocence. He said that the band “wants to make plans for next year.” But that is ultimately contingent upon the verdict.

Tentatively, they hope to tour through 2013. After which, the group plans to record its next album. Adler said that Blythe wrote extensively during his time in jail. It’s likely at least some of that material will find its way on the next record, the band’s eighth.

“We’re still having fun doing it,” said Adler of the band. 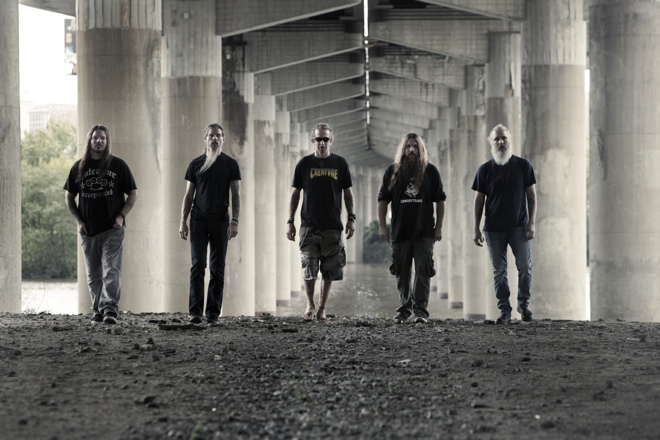