While the RVA Street Art Festival and G40 Summit bring artists from all over the world, another artistic medium is often overlooked. Not only is Gordon Stettinius trying to put Richmond on the photography map, but also build the city’s appreciation for the medium. Learn how this descendent of a former Secretary of State is making that happen. Of all the words used to describe photography, democratic is one of the most precise. This is the adjective that Gordon Stettinius used when discussing the medium in his photo gallery. He says democratic, because photography appeals to people of all races of all genders and of all ages. It is creatively egalitarian. A photographer, teacher, art gallery owner, and book publisher, Gordon is one of the most qualified to submit such a description.

While majoring in printmaking for his BFA, photography was the “go-to creative act” post-college. “I love photography,” said Gordon, speaking in his second-floor office within his gallery. He finds the medium to be a great way to engage people. Not only has Gordon engaged people with his own work as a talented photographer but the (sometimes obscure) work of others.

In 2002, Gordon’s friend, Timothy Bartling, helped a New York City neighbor move into an assisted living home. That neighbor was Gita Lenz, a photographer who had taken the majority of her photos in the 1940s thru the mid-1960s, creating a portfolio largely unnoticed by others. Bartling contacted Gordon to see about properly storing Lenz’s large collection of both photographs and negatives. “She was dedicated,” said Gordon about her work habits. Not only was she prolific, but he said “the work was strong.” In the following years, Gordon began to learn more about, not only about Lenz’s work, but Lenz herself. Having virtually no family that she kept in contact with, “I became the guy that knew the most about her.”

While he has created a notable name for himself, Gordon comes from a family of notables. His grandfather, Edward Stettinius, Jr. served as Secretary of State under presidents Franklin Roosevelt and Harry Truman. “He died when my dad was fifteen,” said Gordon. “I’ve pretty much read everything that I know [about him].”

About the time that Lenz’s mental faculties began deteriorating, Gordon pitched the idea of collecting her work in book form to publishers. “We wanted for people to be able to know her.” No one was seriously interested.

Feeling that Lenz’s work was something that needed to be preserved and shown to others, Gordon created Candela Books. In 2011, Candela released Gita Lenz: Photographs. The book also coincided with a gallery exhibition in New York City’s Gitterman Gallery. Proceeds have gone to an as-yet established trust or community foundation that will provide scholarships to photographers.

Candela’s second collection of photography, Salt & Truth, which featured photos from Shelby Lee Adams, cemented Gordon as a publisher, although he “never dreamed” of being one. However, he maintained that gallery shows, while important, are ultimately “ephemeral”—the only way to make photography truly enduring is by exhibiting it in books. He’s now in the process of preparing Candela Books’s third anthology of photographs.

In December 2011, Gordon moved Candela Books to its gallery at 214 W. Broad Street, right in the heart of the oft-forecasted Arts District that Mayor Jones and others would like to create. The current gallery exhibit features photographs from the elusive portfolio of Julio Mitchel (“people really haven’t heard of him like they should”). While he affirmed that “Richmond has a vital photography scene,” Gordon said he aims for his gallery to also “bring people to town” to showcase and cement Richmond as a hub of creative photography. 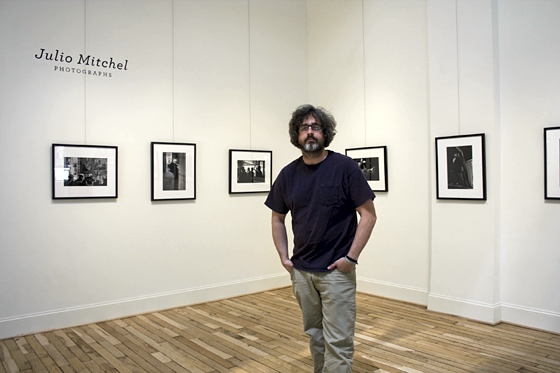 Later this summer, Candela Books will premiere its Unbound Collection. Envisioned as an annual exhibit to promote and showcase both local and national photographers. Accepted pieces will be featured in the gallery, with some collected for a permanent place in the exhibit. Although it seems that balancing publishing, a gallery, and teaching duties (Gordon is an adjunct photography instructor at VCU) would be difficult, Gordon is passionate about all that he does, especially with Candela Books. “I just hope it becomes more noticeable.”