The concert that’s inspired filmmakers and scores of local kids returns later this year with some famous musicians. Over 100 of Richmond’s most exceptional children will perform alongside famous musicians in one of the most fun and inspiring concerts of 2013. LIVE ART: Tree of Life will feature Jason Mraz, k.d. lang, and others who’ll perform with School of the Performing Arts in Richmond Community (SPARC) students in a concert that features music, singing, acting, spoken word, and more.

Over 11 months, roughly 120 students in the LIVE ART program enroll1 in classes like acting, photography, music theory, computer technology, and others. Students will get to show off their newly-learned talents in the upcoming Tree of Life concert.

Founded in 1981, SPARC has over 100 faculty and teaches roughly 2,300 students aged 3-18 each year in a variety of performing arts education programs. SPARC put on the first LIVE ART concert last summer, which Ripperton called “one of the most inspiring things that anyone of us has ever seen.”

Filmmakers Bill Gaff and Martin Montgomery shot over 200 hours of film documenting the training and performance of last year’s concert for a film expected to be released this fall. Here’s an extended trailer for the upcoming film, which won first place in the PBS National Online Short Film Festival:

Mraz credits SPARC with giving him his first break when he was cast as the lead role in Joseph and the Amazing Technicolor Dreamcoat at 15.

“He had a great time and was immediately interested in returning to it again,” Ripperton said about Mraz’s appearance at last year’s LIVE ART. “He also helped us to recruit some of the other musicians” for this year’s event.

The most notable is multi-Grammy winner k.d. lang. Other musicians include Christina Perri, Rene Marie, Robbin Thompson, and more. Ripperton said these and other guest musicians will perform solo or in tandem as “students are doing their act of live art.”

While hesitant to give too many performance details, Ripperton said the theme of Tree of Life is “about life’s journey and the sunshine and the rain that makes up all of life’s journeys…” 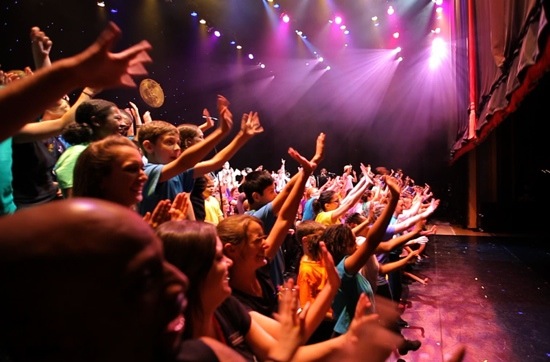 Tickets for LIVE ART: Tree of Life go on sale on Friday, June 28th at 10:00 AM. Tickets are available on SPARC’s website and at the CenterStage box office and range from $30-$65. VIP tickets will also be available and include a tax deductible contribution to SPARC. VIP tickets are only available on the SPARC website. The performance of LIVE ART: Tree of Life takes place on December 22nd at 6:00 PM at the Landmark Theater.

photos from the 2012 LIVE ART concert courtesy of SPARC