GWAR, Me, and the On-rushing Grip of Death: Part 55

GWAR finds a new drummer and readies itself (and their Battle Barge) for a new East Coast tour. 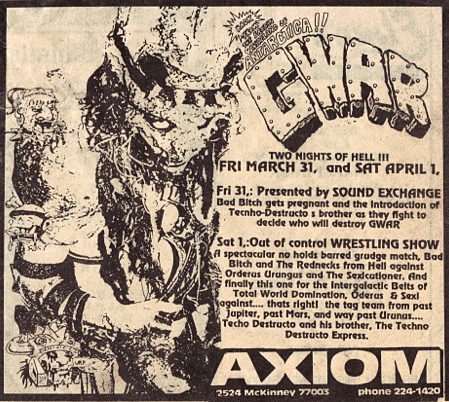 Flyer from our two-show stint in Houston, which also happened to be the first two shows of the so-called “Death Tour”, circa 1989.

So Lee Beato had gone crazy and Rox had finally lost his job after cracking Sleazy with a beer bottle. Rox was always so much fun. I can remember so many fun things we did together–like shooting at highway signs with his Saturday night special while driving down the road in the middle of the night, hanging out of the open front door of the battle-barge (our school-bus tour vehicle). Or the time I caught him and J.J., yet another one of our potentially disastrous early pseudo-managers, shooting up in stairwell in the Bowery. Back then downtown Manhattan wasn’t trendy or cool, it was a shithole, so it was two dudes shooting up in a shithole stairwell. Barf! Needles never happened in the world of GWAR, so that was actually shocking to me–and still is. The physical act of shooting up just seems so pathetic and absurd. Of course, this coming from a guy who thinks nothing about hitting a multi-tube water pipe five minutes after he gets out of bed. There is something very pathetic about that as well!

We didn’t want any needle users in the band, period. Crack was just starting so that wasn’t an issue; I’m pretty sure that I hadn’t even SEEN crack at that point of my life–except for the time Thuglas smoked a piece of wallboard and insisted it was crack. Even though it looked like piece of sheetrock he insisted it was “blowing the back of his fucking head off.”

Point being after the bottle and the needle incidents, things had finally reached an end with Rox. It wasn’t all about drugs or cracking people in the head with bottles after pulling their coats down around their shoulders (which is a great technique). He just wasn’t getting the new heavy sounds that bands like Slayer were laying down. I wanted GWAR to go that way, and I was having trouble getting musicians who were good metal players interested in playing in GWAR. The fact that my drummer was stuck in the seventies wasn’t helping. Rox was pure punk rock and thought metal was for “pussies.”

That was a problem for me in shaping GWAR. They didn’t all have to be metal players, but some of them did, and certainly the drummer HAD to have a double-kick. I didn’t want GWAR to be a punk-rock band but knew we weren’t going to be a pure metal experience either. I remember playing “Reign in Blood” for Rox and receiving a blank expression for my efforts. But he wasn’t alone. Dirty hated metal, but had a great guitar sound and enough talent to shape it in any direction he needed to for the band. The Bishop would turn green when I cranked Carcass, but loved Iron Maiden, so there was hope. We all knew GWAR had to be at least partially a metal band so they were willing to go along. It wasn’t until much later that The Bishop got sick of it and Dirty actually grew to love metal. But all that is in the future, like episode 90 or so!

In the last year we had gone through two drummers—one had gone crazy and one had been fired. We were all sick of the drama and needed somebody we could count on to do this one tour. Then we would find our ultimate drummer and keep him forever (we actually did that). So I turned to local band buddies The Alter-Natives and their drummer Tommy Gun Thompson who, to this day, is one of my favorite people. Whether he is running a cool label in NYC, or making an art space out of an old prison, or joining some Indian sex-cult, Tommy Gun is always doing something interesting with his life. I’m glad to say we are still good friends.

I met him through the Reston tribe of NOVA1 folks, but he was from further out in the country where his dad ran an apple farm. He was a Dairy vet and was known locally for his movie-star looks and banana-dick. He totally got laid way more than me, and his girlfriends were always superhot. Tommy Gun was playing in the Alter-Natives but they were on a break or something so he hopped aboard for the Death Tour, which was shaping up fast. By adding Tommy Gun Thompson I finally was able to enjoy the confidence of the band playing in harmony for a whole tour, even if he was going right to back to The Alter-Natives when it was done. At the time they were one of the most beloved Richmond bands. They were on SST and were about to make a new album. We weren’t going to be able hold on to him, even if he was fucking GW. Come to think of it, maybe that was why he agreed to do the tour in the first place! Duh.

The Alter-Natives were always a fascinating band and are one of my all-time favorite live groups, probably because so many hot girls would come to their shows. I probably saw “the Natives”, as we called them, more than any other band in my life. At the time they were one of my favorite bands, even with the flute player they had added (much to my horror and voiced displeasure). It was a pretty bold and amazing step to put a flute/sax player in front of a psychedelic-instrumental-hardcore band (think Gone but way more fucked-up). I liked it, but still made fun of them for having a wind-instrument. In fact the GWAR lyric from the song “Uaintshit” was actually directed at them.

Just for the record I didn’t write that lyric but I had no problem singing it. Our sense of humor was brutal and the best target for our cruel jokes was often our friends. That shit was lightweight, really.

Dirty and The Bishop liked playing with Tommy Gun. I loved Rox, but was glad he was gone. The only sad apple in the cart was Spewy, who played Flattus. From the first days Flattus was ridiculed by the other GWAR members and musicians, mostly because of Spewy’s depressed character and vegetarian lifestyle. Sensing this, The Bishop and I would join together to torment him and his tattoos. His nickname was “Stupid Tiger Leg” because of the tattoo of a stupid tiger on his leg. He used his lethargic misery to get girls to feel sorry for him so he could give them sleep-inducing backrubs and then beat-off next to them. He was also a wicked guitar player and the most metal player of the lot.

But it wasn’t just the band that was happy. The artists had produced their most spectacular GWAR show yet with the “Wrestling Show,” which we had done a few times already up and down the East Coast. It was GWAR vs. the Techno/Techno Tag Team Express, and we had floor mats and turnbuckles to complete the rude illusion that GWAR was fighting for “The Frank Sinatra Belts of Utter World Domination” against a host of ridiculous opponents. We had extensive choreography and cues, and it was a far cry from the un-tuned chaos of early shows. With Muscles sound-effects, keyed from the house with a midi-keyboard (and that was some cutting edge shit back then!), the illusion was complete with bells and boos and metallic rending noises. The “Wrestling Show” was our greatest show yet.

Tommy Gun’s GWAR character was known as “Hans Orifice.” Back in the earliest days of GWAR, when Tommy Gun was playing with us and the Alter-Natives, he was known as “Hans Sphincter,, and played with his brother, “Stephan Sphincter”— but were also called “The Orifice Brothers.” In the chaotic world of naming early GWAR characters, it made perfect sense that when Tommy Gun re-joined the band he became “Hans Orifice.” Tommy Gun Thompson had an irrepressible wit and a way of making the most serious subjects seem absolutely ludicrous.

We scrambled to get a costume for him and he rummaged around the old ones until he ended up with a curious combination of what looked like a lightly-armored GWAR character and a sleepy college student. He actually wore long underwear along with his other shit and for some reason it really worked–that is until Tommy Gun realized that he would piss himself every show. He had played in bands for years, but when he went out with us on that tour he started spontaneously pissing himself every time he climbed on the kit. The long underwear was ditched for a pair of “Wilma’s”,2 and a new GWAR character was born!

We pulled out of Richmond with high hopes and a brand-new grey paint job on the school bus. We had learned the hard way that driving around the country in a yellow school bus covered in graffiti with a huge pair of bull horns on the roof and the word “GWAR” painted above the windshield in bloody red letters was a great way to get pulled over. So our beloved “Golden Battle Barge” became “The Lead Sled,” covered by an unremarkable uniform grey coating with a white roof and black bottom-trim. But a nice paint job wasn’t the only improvement: there were storage bays welded under the bus and nice new foam for all the sleeping compartments (stacked like cordwood atop each other on a central aisle). We still had all the costumes piled up in the back of the bus but increasingly they were stored in boxes, so the stench wasn’t quite as bad. We still had “The Urine Cone” in the front exit well right next to the driver. It was a brine-encrusted contraption whose purpose was all too obvious. Luckily nobody ever took a dump in it!

Whew! I keep thinking I’m going to be writing about this tour but I keep remembering cool stuff that happened before we even started. Well, at least we got the bus crewed and on the road—so in two weeks—GWAR launches itself on a flurry of coast-to-coast shows, breaking hearts and cutting farts! See ya in two weeks!