GWAR, Me, and the On-rushing Grip of Death: Part 51

We had successfully made it around the entire country without the bus suffering any major blow-outs or any of us killing each other, but my older brother Landrew was entering the final stages of his long struggle with AIDS.

We are getting close to the big premiere of my new TV show, “Holliston”, on FEARnet. The brainchild of horror director Adam Green (Frozen, Hatchet) and Joe Lynch (Wrong Turn 2), this show is, quite simply, a sitcom for horror movie nerds and people who love metal dudes who dress in ridiculous costumes! Check it out on Direct TV or the web or however the fuck you are supposed to do it. Here: go here. 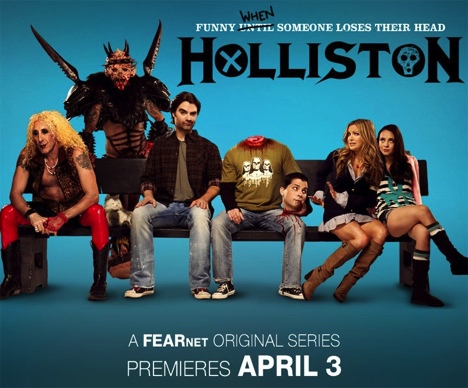 But we are not here to watch TV, we are here to read more ridiculous stories about the world’s hardest-working band: the mighty GWAR. So let’s be on it!

Episode 51: “My Homo-Brother is Dying of AIDS”

We had done it! We had successfully made it around the entire country without the bus suffering any major blow-outs or any of us killing each other. The clubs had been far from packed, but we had some good shows and there was definitely a developing interest in the band. The biggest proof of this was a huge article in the then-very-influential Flipside Magazine, featuring a great shot of Slymenstra on the cover, fist in the air, blood streaming down her thighs. There was a long in-character interview with the whole band, and whoever wrote it used those annoying Mac-emoticons (computers were pretty neat back then!), so nobody could tell who the hell was saying what. In the same issue we were voted “best show” and “worst new band” of 1988. With the exception of having to leave SlaveOne in a Navy stockade, we had come through all right. It was a chance to catch our breath and take stock of the situation, and I split to the D.C. area for a weekend with my brother and Mom and the new dog Higgins, and hopefully some late-night Advanced Squad Leader games with my best friend Dr. Skull. But it was getting tougher to both be either present or away from there for too long.

My older brother Landrew was entering the final stages of his long struggle with AIDS. The symptoms would come and go but they were always nasty. My brother suffered from shingles especially. The pain meds were heavy, but I never touched his medicine. At that point I was still terrified of that shit. Besides that he needed every bit he could get. The shingles would form into big patches of sores and scabs that itched and ached him woefully. When they formed on his back he couldn’t lay down flat for days. It was fucking horrible. He’d lost a ton a weight and was becoming more and more bed-ridden.

Then, suddenly, he’d get better. He’s be back to his usual bossy yet indolent self, indulging in all manners of yummies I would get for him at the local mall that now occupied the ground that, as child-soldiers, we had once ruled. He would laugh and drink a glass of wine, smoke a joint, and sit in the sun. If I was lucky I was home for these times. If he was lucky I would work out in the yard.

It would only last a week or two and then he would get worse again. Then he started having to go to the hospital–sometimes for days. Then he’d get better, and come home again. So we still had every reason to think that it was possible a cure or treatment could be found before the illness claimed his life–as it had claimed the life of every single person thus infected so far. To fight the disease, and dull it’s pain, Landrew was on a wild concoction of drugs…the beginnings of the famous “cocktails” used to slow the disease down. I’d sit there and watch him take pill after pill. He had survived years with the disease so far, and I wasn’t going to let him down–I wasn’t going to give up hope that somehow Landrew could be saved.

But slowly at first, and then with alarming regularity, his friends had started dying. Landrew had lived all over the country in the diaspora that was his life after high school. His lovers and friends were scattered coast-to-coast. And one by one they began to get sick and die. My Mom would tell me all the details over the phone and I would listen in stunned silence as people I had known for years started dropping like flies. At first Landrew had spent time taking care of them, but it wasn’t until the disease made it hard for him to take care of himself that he had to move back home, to that room where he had used to come as a child–the only sanctuary he had against the relentless teasing and abuse that drove him from school. Over the next few years Landrew had lost pretty much every gay friend and lover he had ever had. They had been doctors and drunks, bell-ringers and book-shop owners. All of them were great people, kind, generous, full of spirit and life. Their deaths seemed so cruel and their lives so useless. It made me want to cram as much life as possible into whatever time I had.

To cope with my brother’s impending death, I made myself believe that with Landrew it was somehow going to be different. He hadn’t come home to die, he had come home to get better. They were going to find a cure or at least a way of slowing this thing down. He would just have to fight it out until then. But he wasn’t going to be alone in his struggle. Landrew had made good friends with many of the GWAR people, and his best friend was Kathy Duck, who had been my girlfriend in high school and the early D.C. punk days (which were actually still going on at the time). And of course he had my Mom. I did my best to get up to Northern Virginia at least once a month, bringing Landrew pot to help him work up his appetite.

It was a bittersweet feeling for my Mom, I am sure, who was delighted to have someone to share the house but would have given her own life in an instant if she could have somehow altered the circumstances that dictated the situation. For my Mom it was the final acknowledgement of the crummy cards life had dealt her, and if it hadn’t been for my brother’s illness I am sure the depression that finally consumed her would have struck much earlier.

It hadn’t been an easy road for my Mom. She had lived through a horrible war, then lost her boyfriend in the King David Hotel bombing in Palestine. Thoroughly fed-up, she had met my Dad and moved to Canada, leaving her entire life behind. After that there was a series of no less than FIVE miscarriages, and each one must have been a devastating experience for her. Then came years of my Father’s infidelity. My Mom was a very intelligent woman and was well aware he had been dorking his secretary for years. She’d put up with his cheating ways until Landrew and I were out of the house, then hired a private detective. When she had enough evidence (he had dumped his secretary and moved on to another, younger woman) she had him served with it, and the out-of-court settlement was both quickly rendered and substantial. Dad hadn’t been around much since. Mom was looking at the prospect of living the rest of her days alone in that house, and unless my brother had moved in she might not done that very long…the prospect of Landrew’s death had given her a new lease on life.

We were beset with the forces of death, but for that fragile moment the family was still together. I would get Sexy or Sleazy to take me to the old Greyhound Station and take the bus to Springfield. There my Mom would be waiting for me in the new Cierra she had treated herself to after the divorce–that I would go on to drunkenly wreck years after her death. We’d drive along and yak it up until we came to the house, where Landrew would either be up or down depending on how he felt. If it was a good day he was dressed and active and might even come to the table to eat dinner. But usually we’d bring him his food in bed, and sometimes I would sit in there with him until he would fall asleep. Then I’d go hang out with my Mom and we would gape at the wonders of cable TV. Higgins would sniff around until I walked him, or Dr. Skull would come by and we would play ridiculously complicated hexboard wargames that would cover the entire living room table. This was my refuge from the stress of running the rest of my life, this was the home of my youth, complete with a mom, a brother, and even a dog. I’d lived there forever and thought we always would, but it was beginning to dawn on me that things were changing fast.

Back in Richmond the guys were getting ready for whatever came next. It seemed obvious that we needed to get back on the road as soon as possible and play as many gigs as we could.

Wild Bill from Indy was still trying to get us to sign a management deal but it was looking like Jiz from San Francisco was a lot more useful. Wild Bill hadn’t really got us any good gigs on the last tour, Jiz had delivered tons. A strange war had developed between them to try and develop their influence over me. They both started giving me presents. While we were in SF, Liz had given me just about every Slayer shirt ever, plus a pair of rad sneakers. The shirts were courtesy of the folks at Winterland merch, where Jiz was in the process of getting us our first merchandise deal. Wild Bill, sensing doom, pathetically countered with a new bathrobe and some barbecue sauce. Of course the guys didn’t appreciate it too much as I strutted about the Slave-Pit, wearing my new bathrobe, sneakers, and several of the Slayer shirts at once, yammering on about how great I was.

NEXT TIME! AS USUAL, WHAT I SAID I WAS GOING TO WRITE ABOUT LAST TIME!