GWAR, Me, and the On-rushing Grip of Death: Part 50

Fifty episodes! How did that happen? A look back at the year that was and what GWAR has endured to get to this point.

Come on out to the Cory Smoot Memorial Show II at the National! Support the Smoot Family Fund and celebrate the life of one of Richmond’s most amazing musicians. HAIL SMOOTY! 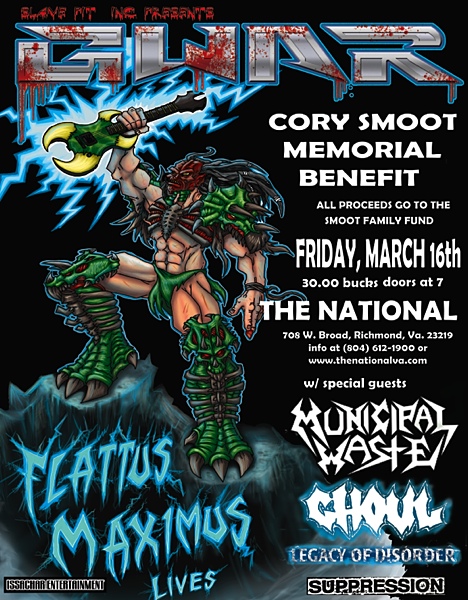 It’s hard to believe that it has been four months since we lost Cory that cold morning in North Dakota. What was undoubtedly the worst day of my life has in my memory become a dull smudge of pain that all-too-frequently flares up into a not-so-dull one. Yeah, it still sucks, and it always will, and I can only imagine how much worse it is for Jaime. But there are good things happening and I am going to concentrate on that stuff.

The Smoot Family Fund now has its own FB page–check it out! I’d like this site to be a place where Cory’s friends, family, and fans can go to read stories, look at photos and hear the music of the man himself…maybe his daughter will use it one day to show off how cool her Dad was to her friends. People can upload their own photos and memories of our beloved Smooty as well. There are a lot of Flattus tattoos out there.

I just want to thank everybody involved for all the support. It’s been unreal, and very humbling. I am looking forward to getting out there and wrapping up the tour we started with Cory but couldn’t finish with him. Give everybody a chance to say goodbye Flattus and Cory one last time. They’ll both be there, in spirit. 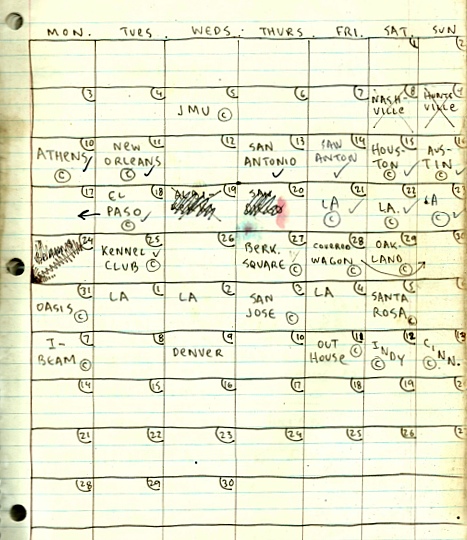  
Check out this page from my original tour diary, circa 1988. This was the original lap top, called a “notebook.” It couldn’t play movies, and you couldn’t use it to lie about yourself on the internet, but it had a few advantages over today’s classroom standard: it never ran out of batteries, had instant file retrieval, and only cost 1.99!

Holy shit! We are turning 50 today. 50 episodes spewed out semi-regularly over what? Two years? I need to turn up the heat on this thing, for fuck’s sake we are only at just now reaching 1989. Looks like it is going to take the rest of my life to finish telling this story.

In the two years since we started this thing a whole bunch has happened. Sometimes it feels weird to be reporting so much on stuff that happened 25 years ago when so much is happening now. But hell, that’s what Twitter is for! And while we are at it, let’s get me up to 15,000 followers!

Looking back over the work so far, I realize the events have in some cases gotten a little confused. I’ve reported on things that are still in the future (like Lee Beato and losing Rocks for instance) and forgotten things that weren’t in the past. I think. But with the help of Bob Gorman and his amazing GWAR timeline, and my stack of old “lap-tops”, I think I have got it under control, and will attempt to sort it out in future episodes.

I am pretty stoked I have stuck with this as long as I have, and happy I have not pissed off too many ex-band mates or girlfriends so far. Maybe I should try harder? Naw…I love all of my GWAR brothers and sisters, old and new…there are far too many sordid stories about me to tell about myself to spend TOO MUCH time humiliating my co-workers. The aim of this work is not to embarrass anyone, it’s to get some laughs, and the best way to do that is keep them at my expense. For some weird reason I often value the friendship and support of people I suspect of despising me. Anybody who hung in there with GWAR hung in there through some insane shit…and I am grateful for anything anyone ever did for GWAR, whether they hate my guts or not. That kind of useless drama doesn’t even enter into my thought process any more. I mean, I can honestly say I wouldn’t hang out with most of the people I work with, and that may be true for you as well. But the idea of GWAR is so awesome that it binds together people of very disparate backgrounds, and forces them to work together to serve the common good…after all these years I still really enjoy that.

Last year really sucked. But for all the meaningless horror of it, despite Kodar getting beaten to death with a baseball bat, or my old buddy Mindbeast finally losing his long fight with cancer, despite the tremendous professional and personal loss we have suffered, somehow, inside my head, I am in a better place than I have been in years, and feel like I finally have full control of my life. Somehow this group of people that I do my best to lead went through just about the toughest thing you CAN go through and not only came through it, but did it with respect, reverence, and class. I can’t say how proud I am of them and how honored I am to continue working with them.

I guess the best thing about my life is that I’m not lying unconscious next to my bed, about to die of a drug overdose. That’s right, at one point in the darkest of my days it had gotten that bad for me. I did so many different drugs that I was high enough to think I should do MORE. The only thing that saved me was the noise I made falling out of bed, alerting my equally fucked-up but not quite as unconscious drug-buddy. Yeah, I probably would have died if they hadn’t been there to call the ambulance. But I am happy to say that even in the midst of my room being filled with EMT’s and cops, even with me shuddering with cold and the effects of the Narcon that was in the process of saving my life, even with me being unable to answer ANY questions about what the fuck was going on, or what I had taken, or ANYTHING really, I still would not consent into letting the attendant cops search my house. In fact I was told later my exact words were:

“All of you cops get the fuck out of my house!”

But that was enough. I started going to NA. And though I am not a 12-stepper, I got a lot of good stuff out of the program, and still go to the occasional meeting. I can’t not enjoy beer, and I love weed. I can party and control myself. Yeah, I know, I know…but the one thing I know is that hard drugs are out of my life and it’s been long enough now that think I made it through my jungle, and met my old self on the other side. The one that wasn’t on his way to an early grave. The one that has to finish this book, and that painting, and a whole new album. This guy. I like him a whole lot better.

We all have triumphed over death. Somehow this group of people that I do my best to lead went through just about the toughest thing you CAN go through and not only came through it but did it but somehow became stronger, better people. We took the hardest shot death has given us yet, but GWAR will live.

After all of that, I don’t feel much like writing the next episode. That’s a lot of heavy shit and now I feel all mushy inside. But don’t worry! The next episode will be chock full of the asinine depravity and idiotic antics you have come to expect out of me. We’ll be back in two weeks with: life after tour, the cover of Flipside and our first national TV appearance, Black Donna, Mind Control Monthly, inappropriate gifting, and our quest to find a musical home for our next album, which would history would know as…

“The Scumdogs of the Universe”

ALL THIS AND MORE IN THE NEXT THRILLING EPISODE OF
“GWAR, Me, and the On-Rushing Grip of Death”
HAIL SMOOTY!