GWAR, Me, and the On-rushing Grip of Death: Part 49

GWAR continues their West Coast tour, wrapped in the beauty (and drugs) of California. Encounters with famous people (and bums) abound in this the latest episode! 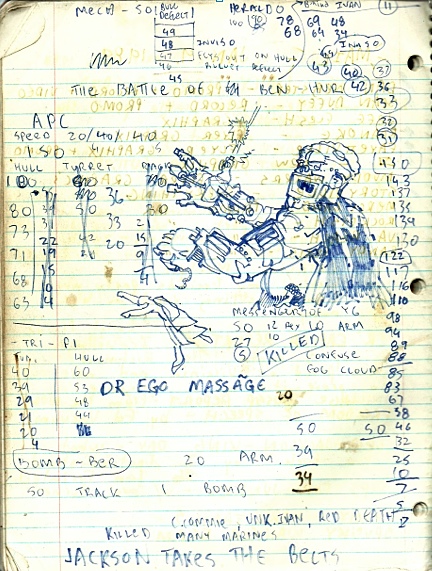 Here is a page from the original tour diary, this one being the character sheet for the Space Melee super-villain, Dr. Mechano, with his dwindling hit-points to the right. Somebody (looks like Sexy’s handwriting) has given the Doctor a less complimentary name.

After the gig we melded with the locals and stumbled through the darkened streets and parks of San Fran-damn-sissy-co, where we were immediately accepted into the tribe and slathered in acid. Due to the influence of Jiz, who had prepared the town for us in exquisite fashion, SF opened it’s hearts and baggies full of illicit substances to us, and we plunged into a multi-gig meltdown of Bay Area debauchery with furious aplomb. That crazy band of mutant rednecks called GWAR had finally made it to the most fucked-up city in the U.S., and SF was going to make sure that it left its stamp on us.

San Francisco and California in general are basically on another planet, one that arguably shouldn’t be allowed to exist. Of course it was end-to-end fucking beautiful, San Francisco included, unless you had the misfortune of witnessing bumsex in the middle of a Tenderloin sidewalk. It went from dark to light quickly there! The terrain in north California is my world-favorite, even when covered in bums. There are landscapes that are so impressive they are scary. Anybody who has ever seen Mt. Shasta knows what I mean. It looks like it’s about to kill you! The climate adds to the general comfort level and attracts homeless people from all over the US. More people live outside there than anywhere else in our country, and they shit anywhere. But they will throw you in jail for flicking a cigarette!

California. I just loved it. It was like some fantasy world of fun. Here I was, mid-twenties, with my mates, rolling around in the Golden Battle Barge, playing shows in the craziest place in the world, and being greeted with gusto and drugs–so many drugs. More drugs than I had ever seen…which wasn’t that hard back then, I was still fairly innocent. I mean I partied. I did suburban drugs, like LSD, beer, and weed. I had done tons of acid, but at that point my hard drug limit was the homemade crank Bam-Bam had used to make out of nasal inhalers. I was still terrified of hard drugs. Memories of walking in on Landrew as he prepared to inject himself, or hanging around with punks in Richmond who were sharing needles (one had actually offered me a syringe full of their dirty blood, I politely demurred.) had given me a certain aversion to it. I liked to think that underneath my asinine persona there was a fairly reasonable and wise person. One who was smart enough to never fuck with hard drugs. After all, I had run the business to this point. Oh, but how that would crumble away…

The state was and still is flooded with cheap and powerful drugs which could be found easily and were in fact offered to us constantly. It seemed like everybody in California was on drugs! If you weren’t injecting black tar heroin then you were snorting meth at least! Being terrified of dying, I had no wish to mess with needles. I pretty much left everything else on the table, and it filled up quickly. For many tours I would spend my entire time in California in a drug-induced stupor. But I would always leave my dalliances behind me. California was like some kind of drug-holiday land.

At a series of parties, meal, walks, and shows we bonded with the Bay and the plethora of personages that it produced. They bum-rushed us in a unrelenting display of attempted friendship, most bearing gifts, and most gifts being drugs. I mean, we had just hung out with a whale, so there was a high mark set, but with the Bay Area being the number one freak magnet in the USA that whale seemed maudlin by comparison (whales are, by circumstance more than nature, naturally sad). There was Gluehead and his speed, and Monteray mark, the scene-appointed “King of the Skins.” We hung with R.K.L. and NOFX and FANG…it was the coolest.

Our next gig was at the Oasis, a club that had a swimming pool in it. Somewhere around there we encountered the hulking blonde bigfoot who would go down in GWAR-lore as the legendary BILLY BAD ASS. Billy was the monstrously cheerful beast of a man-child, and we immediately bonded over a keg of locally brewed barley wine consumed amongst the dunes beneath the Golden Gate Bridge. Billy loved GWAR and gave me a whole sheet of acid. On later tours we would pick Billy up in LA and let him ride around with us for a while, mostly because he always brought weed but also because we liked him. He was probably most famous for having to consume an entire sheet of acid (over 100 powerful hits) at a border crossing and suffered no apparent ill effects!

It gets a bit foggy there, but after a couple days of dogged pursuit I found myself groping a young nymphette who shall be known as Wartney, a blonde beach bunny with big boobs and a slightly bulging forehead. We rudely coupled in a cluster of dirty sleeping bags that our drug-ravaged brains dubbed “acid island”. I blew a load and finally passed out.

When I awoke, I discovered that Muscle, Hootie, Slave1, and Hot Heather had all just arrived from Richmond. With Muscle on board, we added our samples, which made the shows so much better. Slave1 was still on the run from the Navy, and together with me and Hootie made up the improvisational/comedy/hardcore band called Dairy-Aire. We actually had a show set up at Jiz’s club, the Covered Wagon, which Slave1 drove 3000 miles to miss. SF was his original home and he had grown up on it’s streets and almost died on them. His near-death misses included being trapped in an exploding camper to almost bleeding out after ripping himself open jumping over a wall. So the shows were a hell of a homecoming for him. But the whole time, because of him bailing on the Navy, he was one traffic stop away from going to jail at any moment–no fun.

Together the gang plunged into a frenzy of shows that included the Phoenix in Oakland. This legendary venue had walls stitched with Uzi rounds and was in one of the worst neighborhoods in the Bay. Nevertheless we had a sick show there and then proceeded to sell out the Covered Wagon the next night. People were following us around, seeing show after show. Not only fans but now people from record companies. We were doing interviews with Kerrang and hanging out with Robert Crumbs wife! Shit was happening!

So after days of this we finally peeled ourselves out of SF and headed back to LA, where Finch had set us up a final spate of California Shows…and a bunch of good press with photos. It was here that we ran across an obscure group of freaks led by a a guy named Manspeaker. They called themselves “Green Jell-o” and worshiped “the Cow God”. We recognized our shared designs and became fast and life-long friends. Then we hung out with members of the Vandals, St. Vitus, Faith No More, and The Adolescents. Coochy was back too.

I remember sitting with her on a beach, eating fish and chips. It was fucking good. I asked her why people in LA did so much dope.

Right around then we got the word that Slave1, on his way back to Richmond, had been busted by a Nebraska State trooper, and was in a Naval Stockade for at least a year. We were bummed, but knew it had to happen. He would do his time and then return to us. It was actually a pretty good move on his part. For him like many others, GWAR provided a lift-off point from life’s stagnation. The freedom we offered was worth that year in the pokey, and he had hooked up with Hot Heather as well, who would be waiting for him, as would we.

And then it was time to point the snout of the great Golden Battle Barge to the east and leave this drug-soaked fairy tale land behind us. El Duce waved farewell and crawled back into his box. Coochy got her rock star, and L7 went on to the cover of SPIN! But it was time to go. We had to drive all the way to Salt Lake and then to Lawrence Kansas. After the constant partying of California there came a period of endless driving as we took on that journey at 45 mph. We’d managed to build up some money but it was reduced chunk by chunk as we filled up the tank again and again. The 20 people that showed up to our Salt Lake gig didn’t help much.

The first thing to be cut was the grog, then the rations. We whiled away the hours with our favorite game, Space Melee, a hybrid of several miniature wargame systems that Techno had customized for our purposes: building elaborate death machines and painting the super-villians that piloted them, to wage mighty war across the front lounge as we crossed the Rockies. My guy was named Dr. Mechano, and he was a Dr. Doom type of super-cyborg that had ten fingers all of which could do a different attack or defense. I had maxed him out in every respect, and he entered the battlefield inside a giant skull-meteor that had giant drills sticking out all over it. That would bounce around, crushing everything, until it broke apart to reveal Mechano inside his “Slay-Mek”, a customized Goblin Juggernaut. When that finally died, Mechano would fight out in the open, where he was invariably beaten down by a combined assault from all of the games participants.

We were down to our last pack of corn-nuts when we rumbled into the cornfield outside of our gig in Lawrenceville, Kansas, almost 2000 miles from the west coast where we so recently had ruled. Now beaten and bedraggled by days of bus travel, we stumbled around the grounds of the hovel-esque club waiting for the pizza to show up. When it did we were so hungry that we attacked the Dominos man in his truck, eating the pizza through the window like that scene from Night of the Living Dead.

Next time: The final leg of GWAR’s first tour…will our heroes get home alive? And what will await them once that they get there? Find out in two weeks in the next thrilling installment of…

GWAR, ME, AND THE ONRUSHING GRIP OF DEATH!