GWAR, Me, and the On-rushing Grip of Death: Part 48

GWAR continues their West Coast tour despite a failing Battle Barge. And who opens for them during their first show in San Francisco? Just some band called Soundgarden.

Check out the new pic of the cast of my new TV show comedy-thingy, HOLLISTON! Aren’t Cory and Laura HOT? They smell good too! Gee, Dee doesn’t look too happy. I guess the bus was late! And WTF is Oderus doing in there? I guess we’ll figure it out on April 3rd when the first episode comes out. That’s right, Oderus is in a sit-com. Dreams do come true! But we’re not here to watch TV, we’re here for… 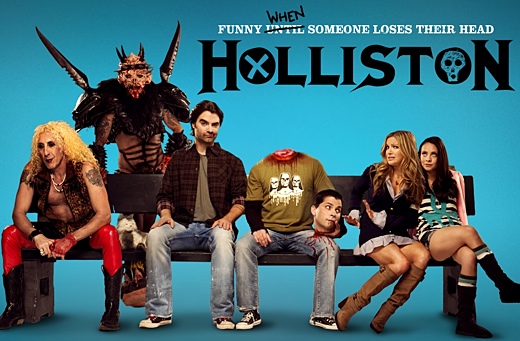 So the tour had made it to the West Coast and it had yet to be a disaster. LA had greeted us with a leery eye, but we had won them over with relentless enthusiasm and wacky antics. The local scene was buzzing about this crazy band from Richmond, and to the smog-choked denizens of that strange place, we must have been a breath of fresh air. Plus we weren’t a bad-looking lot, as Finch1 put it:

The Battle Barge had found its berth in front of Babushka’s house–one of those classic LA one-floors right next to a gigantic elevated highway. There were comforts for all and we spent a day re-charging our batteries as I tried to book us more shows. The tour was far from completely booked, and there were holes all over the schedule. Despite Spewy spending an entire day under the bus, still it did not move. This was not good.

It seemed that we would have to actually spend some money and buy some parts rather than have Spewy continue to fashion them out of bark and chewing gum. The tour was usually running on less than 100 bucks, so at any point we were one happenstance away from a catastrophic plunge into ruin. But we were coming up on our San Francisco shows, home of the mighty Jiz. We were playing the Covered Wagon in San Francisco, and she had a bunch of other shows in the Bay Area ready to go. Then we were headed back to LA before we reversed our course and attempted to return to Richmond. Considering that the Battle Barge was breaking down repeatedly, I wasn’t overly optimistic about our chances of getting home without having to call somebody’s parents. But at that point I felt confident enough to give everybody a per diem (five bucks…) and set them loose on the city of Hollyweird.

Babushka and I hit it off hard, and our whirlwind punk-rock romance left both of us naked and breathless. She was the only girl I knew that had ever read Michael Moorcock’s “Elric” stories, and that gave her limitless cool points. Her band, L7, was coming up in the local scene, and everybody loved them, so she was basically the perfect person to get a tour of LA from. We went to some insane warehouse party where the walls were covered in black light and florescent paint and a crowd of a couple hundred freaks were checking out a really kick-ass band whose lead singer was going fucking nuts. The name of the band was TOOL, and Babushka introduced me to them after the show. They shared a drummer with a band called Green Jell-O, and in a few days a band named Soundgarden was opening up for us. Funny thing, life.

Finally we got the bus moving and drove north along the coastal highway. The view of the Pacific Ocean was simply incredible, and we drove off of the road several times looking at it. Later tours would employ hulking tour buses which hurtle bands through the night at 85 miles an hour, but for now we were touring the world at 45 mph–which made it a lot easier to stop.

About halfway to San Francisco we saw a gaggle of various vehicles parked besides the beach, and a small crowd of people gathered on the sand. It seemed like a good place for a piss break, so we pulled the Battle Barge to a slewing halt and stumbled out into the brilliant sunshine. As we got closer to the ocean, we could see people in the group were pointing at something out in the water, and I strained to see what they were staring at. Suddenly a black shape broke the surface, followed by a larger mass; the behemoth rolled over on its side, and from not more than 100 yards away fixed its eyeball on the group of humans on the beach, wondering at us as much as us at them. It was incredible. A group of three pilot whales were playing in the surf and for about an hour we marveled at them. They seemed completely aware of our presence and at times seemed to be putting on a bit of a show for us. Even the most jaded punk rocker could not be in the presence of such a creature and not feel a peculiar empathy with it. I’ll never forget that glittering eye, and the way it looked into my soul.

San Francisco was the avant-garde clearing house for the punk movement, and the diversity was palpable. This was the city that Jiz called home, and ruled with meat-wielding fist. We rolled into town at about four in the morning, and parked on Mission, fending off local weirdoes until we finally made contact with Jiz. She took us to yet another warehouse where we crashed for a bit and then headed to what would be the first of many gigs in San Francisco–this one at the infamous Kennel Club. As I said earlier, some band named Soundgarden opened the show, and blew the doors off the place. Their set was incredible and tons of people were showing up. Then our old buddies from Tragic Mulatto played, and the vibe started getting incredibly freaky. Tragic Mulatto was like San Francisco’s version of the Butthole Surfers, and the place was soon completely packed with tons of people on lots of drugs. San Francisco’s finest freaks turned out in force that night, and about halfway through their set somebody threw a dead cat onto the stage. The singer, Gail, did a horrible puppet show with the thing, whose guts were coming out.

“Poor Flopsy..” she crooned. The woman had an amazing voice and could shoot hot dogs out of her pussy.

Backstage we were flushed with beer and power. This was it. GWAR’s first show in San Francisco. I will translate directly from the spiral notebook journal I kept of this trip. How these words echo through time!

“The crowd is over 450, and we begin to crush them. So close at first our majesty in unaffirmed. They react with a fury of their own. It’s us against them. It won’t happen without a fight, and these people won’t go down easy. I look down and a wild-haired creature is gnawing on my toe. She rips it off and dances away. The Slave loads everywhere, right into this girls face, she helps him and gulps the GWAR load straight down. I go to fill up my brain and that fucking dead cat is back on the stage, eyeball hanging out, wretchedness personified. Don as the Redneck is dragged into the audience, desperately fighting for his ax, slugging audience members. Somehow his rubber head lands directly at my feet, and I feast. Two encores. It ruled.”

NEXT WEEK: No, it’s not next week, it’s the week after that! But did you notice how once again the title of this week’s episode had nothing to do with the episode itself? That’s because I always think I am going to write more than I actually do. So don’t be surprised if we use that title again next time–there is a really funny story behind it!