GWAR, Me, and the On-rushing Grip of Death: Part 46

There was big news around campfire this week. No, it wasn’t the fact that we just had to cancel our Euro-tour because lame-ass promoters make deals they can’t fulfill and then bail at the first sign of slow sales, despite the fact that GWAR traditionally has one of the best walk-ups in the biz (follow me on Twitter @therealoderus if you want to hear me bitch a lot more about this). And, it wasn’t Balsac and Oderus showing up on MTV’s NextMovie, reviewing the new Steven Spielberg film.

No, the news was of a more local variety, and at first it was bad. We heard that Cannabis Corpse, one of Richmond’s coolest up-and-coming bands, had lost half of their line-up. Uninformed, and rather presumptuously, I proceeded to get on the phone and bitch loudly to anybody who would listen. But my concerns were un-warranted. In a move that is as awesome as it was unexpected, Lamb of God vocalist Randy Blythe is going to fill in for their set at The Cory Smoot Experiment (Saturday, January 7th; 6pm; $10; proceeds go to the Smoot Family Foundation). 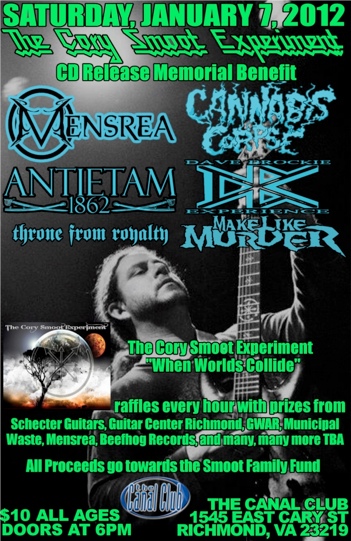 Randy and Cory were good friends, studio buddies, and fellow metal-heads. They are both examples of the best that the Richmond scene has to offer, and as much as it sucks that Cannabis lost half its lineup, the quick-fix is a doozy. Let’s get the whole city out there to pay respects to one of the most amazing musicians to ever strap on the feedbag. He’s the guy that took GWAR’s music and saved it from becoming the puerile pap that it was doomed to stagnant as if we had continued to make albums like We Kill Everything*. He’s the guy that blasted GWAR into the 21st century and made us re-set our focus on immortality. Because when I heard songs like “Bring Back the Bomb,” it gave me a whole new vision of GWAR. Cory mother-fucking SMOOT.

Cory was my little bro. That’s funny because I looked up to him, and he could never believe that. He was always unsure of his place in GWAR, so much so that he still referred to us as “you guys.” He never could quite grasp the fact that, somehow, he had ended up in his favorite band. He was the humblest rock star I have ever met. So let’s all get out there and show the love! I promise DBX is gonna actually practice for this.

Now back to the reason I am here in the first place, the continuation of the lurching monstrosity that is this semi-regular exploration into the history of GWAR and the Slave Pit that spawned it! When we left off, our bumbling belligerents were getting ready to head out on their first coast-to-coast tour. Let’s pick up the action in 5-4-3-2-1…

GWAR, Me, and the On-Rushing Grip of Death: Chapter 46

“On the Load Again”

In October of 1988 we embarked on our first coast-to coast tour, cobbled together with a string of phone numbers attached to anonymous individuals on whose promises I was staking the well-being of nine human beings. For the most part I was confident we would be OK–OK in that we would usually have the essential ingredients for any successful tour: gas, food, beer, and the occasional bag of “wizzy” for those long, story-telling rides between gigs, as I searched the country for blow jobs. I had put a lot of effort into getting this thing together, and in the places we had been playing already we had modest guarantees and pizza waiting. Jiz had us set for Los Angeles, San Francisco, and the upper west coast. It was the places in between that were sketchy. Many of these people were found through random phone calls to clubs, and they set up the shows based solely on the vague rumors they had heard about us.

“Yeah, they fuck goats and chop off people’s heads!”

Anticipation was high as we motored the Battle Barge south, and started the tour with a semi-crowded show in Athens, Georgia. This was at the height of the town’s notoriety as an indie music hotspot, and Michael Stipe of R.E.M. was rumored to have shown up at our gig until he got a face full of jiz. He was fresh off a recent humiliation at the hands of the Butthole Surfers. The Buttholes used to tour around in a van with the words “Butthole” spray-painted on one side and “Surfer” on the other. They had found Michael Stipes house and parked outside for a day, relentlessly blaring an old sea-chanty through Gibby’s ubiquitous bull-horn. As I recall it went something like this…

“Michael Stipe, despite all the hype, we still want to suck on your big, fat, pipe…”

Then we were off to New Orleans, where we had another great show at O’Sullivans, the Irish family that had adopted us and this time treated us to a genuine Cajun crawfish boil that went on for hours. And yes, I do suck the heads! The tour was off to a good start but New Orleans marked the limit of our southern travels. Ahead of us stretched the trackless wasteland of the great Republic of Texas, a place we had yet to defile. We pointed the yellow snout of our Golden Battle Barge to the west and hurtled towards our destiny at a blistering 45 mph.

Our first stop was Austin and the famous Liberty Lunch. It was a big place, kinda half-outside, and pretty much everybody played there. The Buttholes were in town and The Bishop and I went to go do his radio show. Gibby was one of the few people I got tongue-tied around. I was pretty much in awe of the man. At that point we had played together a few times, and they had spread the word well enough in their hometown that a sizable crowd of Texans showed up for our first show in what would ultimately mutate into one of the strongest bastions of GWAR devotees in the whole country.

Right before the show started I slipped out of the dressing room and through the darkened club. For some reason there was a picnic table in the slam pit and I clambered atop it, slowly rising in the midst of the crowd as the rest of the band took the stage. It was crude but effective, and we had an amazing set. After it was over I was complimented by a random female about my six-pack abs. I smugly accepted the compliment, knowing full well they had been achieved by the application of greasepaint. Ahhh, the power of illusion. Afterwards we piled into the battle Barge and drove out to the Buttholes’ ranch house in Driftwood. Here we engaged in an all-night acid-laden debauch of epic proportions, where we chased each other around the gullies and sagebrush that surrounded the sprawling house until the bloody dawn. But the highlight of the night was hearing NWA for the first time. This was pre-Staight Outta Compton, and the album cover featured the guys hanging around on a loading dock with some five-year old white girls, as a Richie Cunningham look-a-like served them malt liquor and serviced their shoes. I was fucking blown away!

Our strong start fell apart as soon as we rolled into San Antonio and the famous Tacoland…famous in that it was one of the worst gigs we have ever played. The place was a small taco-shop, where they pulled together some plywood covered pool tables for a stage and the most offensive David Allen Coe song you can think of played repeatedly. The surreal element of the gig was strengthened by the appearance of the promoter, who went by the name of “Baby Jesus”, was out of his mind on coke, and brought with him a gaggle of transvestite friends. The show was a complete disaster, but unbelievably we let BJ talk us into hanging around another day and playing at yet another lousy club.

“This one has a marquee”, he said as he did rails off a urinal that a transvestite was vomiting into. “We’ll put your name up on it, and tons of people will show up.” The six people that did show were barely a half-a-ton. As soon as the show was over the place was overrun with transvestites, and I think one of our guys had sex with one–I’m not saying anymore about that other than it was not me! But it was the first time the word GWAR had been on a marquee, which makes it worthy of mention.

Leaving a puke-smeared promoter in the bathroom, we loaded up our faithful Battle Barge and continued our journey west…the golden west, and two weeks worth of gigs in California. GWAR’s first real tour was underway, and we hadn’t flailed out yet. But the real challenges lay ahead of us, and it was a long way to Los Angeles…but it was a fucking great time.

NEXT TIME – A NEW YEAR! Have a happy and safe holiday…make the most of what you have, and try not to think about what you don’t. If you are reading this, you are alive, and that’s reason enough to celebrate. Merry Christmas everyone!

* Don’t get me wrong. I love WKE. With songs like “Babyraper”and “Fishfuck”, how can you go wrong? But the album lacked focus, and a lot of my punk riffs were sounding a bit dated. Rather than continue down this path, I formed DBX to suck up all of the silly stuff, and with Violence Has Arrived, GWAR began a quest to reclaim their metallic crown of blistering opulence! Which GWAR style is better? Who can say? But one thing is for sure–nobody is right!