GWAR, Me, and the On-rushing Grip of Death: Part 45

Nothing tests us like death. I have seen with my own two eyes that it can make you stronger, if somehow you can find a way to turn it into something good. I am going spend the rest of my life trying to do that. But, now we are back to the never-more-appropriately-named…GWAR, Me, and the On-Rushing Grip of Death.

The GWAR tour bus, the same one that Cory died on and the same one that we finished our tour with, stands outside the Slave Pit. We had just returned from the first tour where we left someone out there. On November 3rd we realized our dear and fellow musician, colleague, explorer, buddy and pal, Cory Smoot had passed away during the early morning of a sudden heart attack.

Of course we didn’t realize that at the time. We had no answers, just the unreal reality that Cory was gone. Everything assumed a surreal sheen as we stumbled through those next few days. I’m not going to dwell on it. It was the worst, and we did the best that we could. We had to finish that tour, and it was one of the hardest things I have ever had to do.

But I wanted to say thanks again to everybody in the Slave Pit, our amazing crew, and the extended & loving family we have created over the years. You guys blew me away. You rose up and played your A-game. When one of us faltered, someone else was there to pick us up.

Nothing tests us like death. I have seen with my own two eyes that it can make you stronger, if somehow you can find a way to turn it into something good. I am going spend the rest of my life trying to do that.

Good bye, Cory. A lot of people loved the hell out of you, man. I think a lot more than you ever knew, and I hope you know it now. I loved you like a little brother, and I should have told you that more often. You saved my life…you saved GWAR. You gave us everything you had, and you had so much more to give. We are going to miss you.

Perhaps Oderus, for all of his idiocy, said it best…“Fuck you Death! You are a fucking ASSHOLE!” 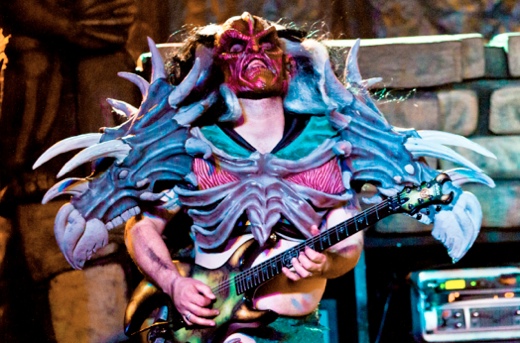 And now we are back to the never-more-appropriately-named…

GWAR, Me, and the On-Rushing Grip of Death: Chapter 45

OK, I remember now…we got WAY ahead of ourselves there! I guess I was just in a hurry to fire those guys again. The truth is we rocked with Rox all the way through 1988 and into 1989. It was after we parted ways that we got Lee Beato, and then finally arrived at the “Scumdogs”-era GWAR–which many would say was us at our finest. I really just couldn’t wait to tell that last story.

So let’s reign in this chronological circus until I can catch my literary breath. We find our heroes (us), firmly entrenched in our blood-red Slave Pit on the corner of Laurel and Broad. Every night the streets beneath us swirl with near race-riots, and on most weekends the Golden Battle-Barge lurches out of its Broad Street berth in search of gigs and booty. It usually went something like this:

After driving for a day straight we arrive at a burnt-out section of Detroit and the infamous Blondies. During the gig a large section of the ceiling collapses directly into the slam-pit, covering several unconscious patrons in soaked drywall. Nobody seems to mind much and the gig continues. After the show I meet this stripper who people keep calling “a retard”. I am thinking to myself “this is a good sign!” at the time not realizing that the girl really WAS retarded. I end up back at some abandoned factory under the care of a local drug and crime lord known as “Scary”*, where I have sex with the retarded stripper on a piece of damp cardboard in the middle of a cavernous assembly room. Afterwards (actually, after about five minutes…) we return to the club where her equally retarded boyfriend walks up behind me at the bar and proceeds to smash me in the back of my head so hard that I don’t even realize that I have been hit. I just sit there with a glazed look on my face wondering what warm liquid was running down the back of my neck. I guess the challenged ruffian mistook my concussion for toughness, as he immediately bought me a beer and said he was sorry for hitting me, but after all, I had fucked his girlfriend. At this point the guys show up and drag me back to the bus. I wake up in Richmond a day later, go to my room, and scrape my bong.

We had finally made our way clear of the entanglements posed by a variety of potentially lethal managers until I was fully in the thrall of Rotundra. She had been a San Francisco girl since day one, and it wasn’t clear that one day she would move to Richmond and become our manager. She had a good spot for herself, booking the Covered Wagon, a bar in SF that had non-stop punk shows. She was the scene matriarch and had all kinds of great hook-ups in the biz–we loved her. As it was, she exerted considerable influence over the phone and was always exhorting me to get GWAR out to the west coast. Her relentless harrying was probably the biggest reason we finally did so.

The album had been out for a little while, and a year of ceaseless weekend gigs had built us a small but energetic following. People were actually starting to call me back, and the money was getting to the point that the band didn’t have to pay dues anymore. That’s right, back in the ancient times before the inter-web, when we didn’t have enough money to pay the bills we all had to cough up 20 bucks a month. But now we had worked ourselves to the point that not only did we not have to pay dues, GWAR would occasionally buy us pot!–the transactions dutifully recorded in the Slave Pit ledger under the heading of “wizzy” or “green paint.” For all of our triumphs we had yet to cross the Mississippi. The Golden West was calling, so I got on the phone.

The plan was to leave in early October, going to the warm places first and the cold places later when it was winter–so right off the bat we were fucked. Meanwhile we warmed up for the tour with a simply awful run through Florida. We played horrible gigs at completely empty clubs and sat around for days in sweltering parking lots. Nobody had any money, so Sexy and I made a whole bag full of bologna sandwiches, which we hid under a blanket so no one would get them. It never occurred to us to use a cooler, and we were appalled to find our food stash rotted and inedible within a day. Broke, hungry, and deeply horny, we limped home. But luckily we regained our panache when we hooked up with Bones’s buddies from Canada, The Dayglo Abortions, for a classic show at the FloodZone. The gigs were starting to come in, and a full-fledged tour was developing. They were few, far-between, and for no money, but they were gigs nonetheless!

I am glad I got to experience this before the advent of the internet. We had to make our contacts with phone calls, and we didn’t have internet yellow pages–so contacts were very important. I used to love going into offices for settlements and at the first chance go through the rolodex, dredging whatever numbers looked interesting. I would call and call until I got somebody on the phone that was willing to do the show. There were no contracts or deposits. Sometimes there was a guarantee, but mostly not. All the info was written into a calendar workbook, which was the equivalent of a laptop back then. I still wonder which is better. I mean, my workbook never ran out of battery, was always on, and had instant file retrieval. Best thing was that it only cost five bucks.

NEXT TIME! I DON’T KNOW! LETS JUST BE HAPPY THIS THING IS FINALLY HAPPENING AGAIN!

* At this point synchronicity occurs in a blatant way. While writing this, I took a break and went to a GWAR meeting, one of those weekly enclaves where we rub dicks and scoff. Bam-Bam hands me an letter that has shown up in the PO box. It’s from a correctional facility in Michigan, and it’s from none other than Scary himself. I hadn’t thought about the dude in years, then on the one day I decide to write about him, I get handed a letter from him. I’m thinking about this for the rest of the day, and am still doing so when I go to dollar Taco night at Little Mexico. There I run into Fontaine. She is standing there with a guy in a Social D shirt, and they both look up in surprise.

“Dave!” she says. “Speak of the devil! We were just talking about you!”.