GWAR, Me, and the On-rushing Grip of Death: Part 43

A trip to New Orleans, multiple band members fired (and hired), a new manager, and a heart felt apology. All in this (and more?) in chapter 43. 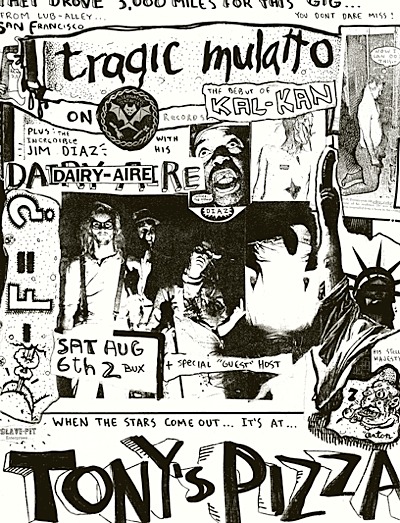 FLYER FROM THE INFAMOUS “TONY’S PIZZA”, LOCATED RIGHT NEXT TO THE OLD SLAVE PIT ON LAUREL

GWAR, Me, and the On-Rushing Grip of Death: Chapter 43

“Comings and Goings, and Cummings…”

Despite our semi-steady rise to middledom, there were conflicts breaking out in the band. The Bishop just did not like Thuglas, and Hoseby said so little that it was unsure if he liked anybody. There had been some problems during a trip to New Orleans. Hoseby started having sex with Damnsmell, even though she had just broken up with Sleazy a couple of days before. And when I say she started having sex with him, I meant actually started having sex with him on the floor of the bus, about five feet away from where Sleazy was sleeping. We got into town, the truth was revealed, and Sleazy and Hoseby came to blows. As much as he didn’t deserve it, Sleazy got cracked in the head with an empty beer bottle, and I spent the better part of an hour picking glass out of his ear. And even though Sleazy ended up going home, pissed as hell, it was Hoseby that had to leave the band.

But it wasn’t solely his sexual indiscretions that led to our parting of the ways…hell, if that was the case I would have been fired repeatedly! It was more of the fact that Hoseby was a rock-solid drummer, in fact so rock-solid that he found it impossible to change or adapt to any new styles. Slayers Reign in Blood was spending a lot of time on my tape deck, and I lent it to him in hopes that he would be as blown away as I was and want to push the band in a similar direction. Instead he returned the tape the next day with a look on his face that said “you’re crazy.” That’s how I interpreted it anyway, as Hoseby never used any actual words or emotions to get in the way of how he was feeling (however that was…).

I have never seen anybody get fired from a band with such grace. During one of our weekly meetings, Hoseby wandered in, sensed he was about to be fired, and quit. And all that without even saying a word! But in reality, I was very bummed we had lost him. I really liked him, and was really fond of his drum style–despite his stubborn desire to not take any influence from anyone else. Hoseby came up with the drum intro to “Horror of Yg”, and any drummer that can do that is pretty awesome in my book. But back then there was just something inherently uncool about being in GWAR, and Hoseby was cool, super-cool, cool to a fault…and he was history.

The New Orleans trip was amazing. I had never been there before, and it was part of the longest tour we had embarked on to date. I’d never been to a place like it, with the 24-7 partying, and as soon as I saw a group of beautiful co-eds passed out on Bourbon Street in a growing puddle of their own vomit (and several other people’s) I knew it was my kind of town. The locals warmed to us immediately and we found ourselves invited to a house party where the host encouraged us to try on all of his roommate’s dresses. That didn’t work so well on The Bishop, who tore up several trying to squeeze them onto his 250+ pound frame. Then the guys from NOFX showed up, and the party was really on. I remember being in drag, heels and all, my nose painted black, flying down a huge flight of stairs on a cafeteria tray and hitting the door at the bottom of the landing so hard that I set the bell off. The only way to shut it up was to rip it out of the wall, and as we did the REAL owner of the house came home who was none too happy to find out her entire wardrobe had been destroyed and her antique serving-tray used as a bobsled.

Thuglas was the next to go. He was the oldest guy in the band, and for some reason that made him a target for a considerable amount of scorn from The Bishop, who wanted his friend, Dirty D, in the band. Thuglas didn’t help himself much by being in like five bands at once. I remember once he showed me a shirt he had made that had all of the names of all of the bands he was in, with arrows pointing to what he considered the appropriate matching body part. Mudd Helmut was his head, Death Piggy (which still hadn’t thrown in the towel at that point) was his heart, and GWAR was his cock. I remember him proudly showing it off to me, and thinking it was about the stupidest thing I had ever seen.

Thuglas and Hoseby were also the only two band members who used hard drugs, though later I would find out what a complete lie that was, and indeed become a pathetic drug addict myself, almost offing myself in the process. But that’s another story-—an ugly, horrible story. Thuglas was infamous for an incident in which he claimed that a piece of crack he had bought (which we thought looked suspiciously like sheet rock) was “blowing the back of his head right the fuck off.” These things, and much, much less, led to his demise…and it was ridiculous and unfair. Thuglas had supported the band with time and money, had worked as hard as anyone else, and once had piloted the battle-barge through a dangerous glacier crossing in which icicles were actually forming inside the bus. I would have stuck with him for those reasons and many others, especially the fact that I was a complete pussy. But I was going to lose The Bishop if I stuck with him, and The Bishop was the best musician we had. It was a shitty position to be in, and I felt really bad the night we summoned Thuglas to the space to fire him. As it turned out, he sensed the impending doom, and quit before we could lower the boom. Thuglas was like an older brother to me, and I felt completely shitty about losing him. It took about three pitchers of beer and a slobbery blowjob from Scrappy McGee until I felt better.

Thuglas’s departure opened the door for Dirty D, who stepped into the character of Balsac, which fit him well, as he talked even less than Hoseby had. For our new drummer we cast our eye on the local scene until it settled on Cro-Mag, a burly brute of a man-boy who had a bright yellow Yamaha kit that was about the loudest thing I had ever heard–next to my mouth. Cro-Mag had first encountered me at a punk rock show at the legendary Benny’s, where I had been slamming the wrong way and had a copious amount of dirt coming out of my mouth. He was advised by his friends that “everybody hated me” and to never drink after me. Still, for some reason, he felt compelled to be in a band with me, and liked that we had lost and gained both a guitarist and a drummer. If I knew then that 25 years later I would still be working with him, I would have shit a string of pearls.

I was still booking shows, mostly east of the Mississippi, but my eye was straying westward. I knew when “Hell-o” came out that we would have to tour the entire U.S., and I needed help doing it. Around that time I started getting calls from the notorious Jiz, a promoter from San Francisco who ran a club called the Covered Wagon and worked with a band named “Tragic Mulatto”, a kinda poor man’s Butthole Surfers. They had heard about us, probably from El Duce, and somehow dug up my number hoping to get a show out of me, which they did (see flyer above). I was pretty stoked about working with them as they had three girls in the band, and I was pretty sure I stood a chance of fucking at least one of them. We booked a gig with them in Raleigh, N.C., and took off to meet them. I will never forget seeing their van pull up outside the club and disgorge the most mutated crew of freaks I had ever seen. But they were a great band, and their singer Gail could shoot hot dogs out of her pussy, and sang like a mother fucker. Bambi played drums, and Jiz was the manager.

Jiz was one of the most formidable women I had ever seen. Called “The Great Pumpkin” by some, she had the dubious distinction of being wider than she was tall, with a brain that was even bigger. We had a great time over those few days, and when they left it was with the promise that she would help us book our first national tour. Little did I know that within a year she would move to Richmond, and be our first manager that was worth a shit.

But not all the girls that were starting to gravitate towards GWAR were managers…or mutants. Around that time a skinny brunette with legs up to her armpits began hanging around the Slave Pit, taking pictures of the various proceedings, and shooting down everyone that tried to fuck her. I hated being shot down, and my standards reflected that, but…damn she was hot. She quickly got the nickname of “Highbutt,” for reasons that were obvious. My idea of courtship was hanging around the Slave Pit and singing along to N.W.A. with my shirt off as she and her buddy Smelly took pictures of various disgusting things. My idea of a move was waiting for her to go to the bathroom, or the office, or anywhere on the premises where she would be momentarily isolated, so I could suddenly loom out of the darkness and jam my face onto hers.

Little did I know that it would work, and within a couple of years I would have my first real girlfriend…a bitching, righteous girlfriend, who stuck with my worthless ass for years. A girlfriend that I didn’t ever appreciate or treat right, and probably never told her until right now just how bad I have always felt for the pain I put her through. For some reason, just like Hoseby and Thuglas and Jiz, we remain friends. I’m not sure why it happened that these people I loved, but let down, still stick up for me. I just want all of them to know: you were part of GWAR when we needed you the most, and you always will be. We miss you, and when we see each other on the street or at the gig or even in Australia (as is the case with Thuglas, whose band The Resignators just toured Canada), everything we did together is never far away.

I had a new guitarist, drummer, girlfriend, and manager, and I was the lead singer of the coolest band in the universe. How would I manage to fuck it up?

NEXT TIME : I don’t fucking know!