GWAR, Me, and the On-rushing Grip of Death: Part 38

One day I received a severed pig’s head in the mail. It was Wild Bill’s way of saying hello. The pig’s head had been sawn off neatly and then encased in shrink-wrap, so it hadn’t started to rot. I didn’t know how to eat a pig’s head, so I threw it away after everybody had a good look at it.

OK, my timeline was a little off on the last summation of what this episode was going to be about. I am always so happy after I finish one that I assume that I am going to fly into the next one, and just write up a ton! But I never do that. Instead, I put it off until the last second. I send email after email to my editor until they clog his box, all of them saying the same thing (I will be done in an hour) until the quantity of verbiage in these pathetic excuses dwarfs that of the very story itself.

And really, who should care about this story when our comments section is so lively. I think it is very cool that people are responding to this thing. I especially encourage ex-GWAR and Slave Pit people to write stuff, if for no other reason than to correct my many lies. But remember one thing about this…I am going for laughs here. I see this thing as a great way to get a lot of them. The shit we got up to was hilarious, and it deserves to be remembered. And I know I have forgotten far more than I remember, and sometimes these memories will be hazy. And that is when my imagination takes them over and makes it something it wasn’t…for a laugh. I am far more a story-teller than a judge or a reporter, and I will try to abstain from being either of the last two. Generally speaking I will be the one thrown under the bus, by myself usually, but with others if necessary. It will be so funny as we all get crushed to pulp! But if you have anything to add to the narrative, disagree with, or outright call me out on, please do! That’s what the forum is for! Who knows? Your comment might make the novel.

But as I was saying, I need to re-do the title from the last one…lets just keep it to…

GWAR, Me, and the On-rushing Grip of Death: Part 38 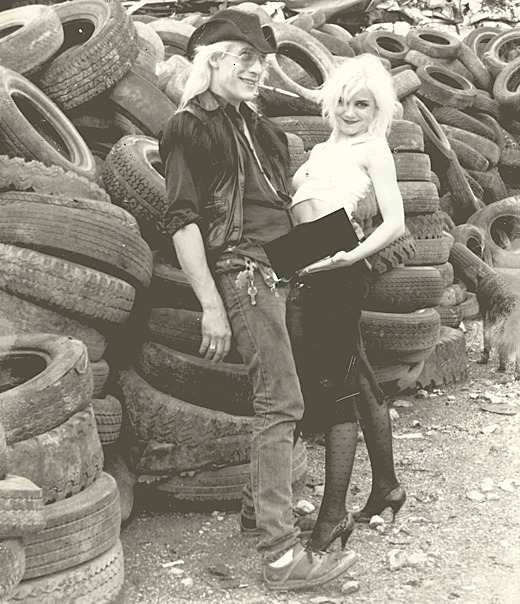 Wild Bill, one of the first managers of the band, next to a pile of tires, 1987

One day I received a severed pig’s head in the mail. It was Wild Bill’s way of saying hello. The pig’s head had been sawn off neatly and then encased in shrink-wrap, so it hadn’t started to rot. I didn’t know how to eat a pig’s head, so I threw it away after everybody had a good look at it.

Wild Bill was a promotor/barbecue guy from Indianapolis who had heard rumblings of GWAR and decided that indeed it was the band he had been waiting for. He began to bombard us with faxes, phone calls, and weird things in the mail, like the picture above. That picture hung in the Slave Pit for a couple of years, and at one point every thumb-tack on the cork board had been stuck through his dick. His approach was pretty easy to read — he had heard that we were wild and crazy and the best way to impress us was to out wild-and-crazy us. Bring on the decapitated pig heads and pictures of your dick! This actually had kind of an opposite impact. From the beginning everyone thought he was a freak.

Nevertheless we allowed him to barge on in, to the point that he drove out to Richmond with his girlfriend. When they showed up I was way bummed. That wasn’t the same girl that had been in the pictures! Pretty much the only reason I had agreed with him coming out to meet us was because his girlfriend looked hot — and even more importantly slutty. I figured if this guy wanted to be our manager so bad there was a good chance he would let me fuck his girlfriend. But when he arrived he had a different woman with him, one that was his current girlfriend, one whose sour disposition quickly earned her the nickname “Stoolie”.

Wild Bill really wasn’t doing much better. The first thing working against him was that he had sent us a severed pig’s head in the mail. The second was that he had been introduced to the guys by me, which made him completely sketchy by association. Plus he showed up and immediately gave me an expensive bathrobe (in front of everyone), then awkwardly and obviously pulled me aside, within earshot of the entire Slave Pit, and whispered loudly,”Brockie, YOU and ME are gonna be RICH!”

Nevertheless we allowed Wild Bill to book us some shows and drive us around, but that only made matters worse. You see, every time that that we came to a bridge or overpass, Wild Bill would suddenly freeze up behind the wheel…his face would contort, his hands would grip the steering wheel with white- knuckled intensity, and Stoolie would have to help him somehow guide his van onto the shoulder of highway and change drivers before we got to the bridge. Luckily we always managed to do it, so I never actually saw what would have happened if Wild Bill had been forced to drive across a bridge, but I am sure we would all have died. The point is it was a complete pain-in-the-ass. If this guy couldn’t drive us across a bridge, imagine what flying was going to be like!

So Wild Bill was basically doomed before he even got in there. But in true Slave Pit tradition we didn’t get rid of him, instead we kinda let him hang around, slowly blowing him off and refusing to sign the contracts he sent us, all the while probing him for any useful information or contacts. And when I felt I had gotten everything I could out of him, he was set aside.

Sound awful? It was. And I felt bad. But you could only feel so bad for a guy who had shown you his dick before you even met him. I was already on to exploiting the one good contact Wild Bill had given me…a number to one of his old buddies from high school, who had gotten into music law and gone to New York to practice it. He ended up being the in-house lawyer at a little label called Def Jam.

For the purposes of this story he shall simply be called Tavel. Tavel never gained a nickname from the crew, possibly because “Tavel” didn’t really lend itself to an obvious disparaging remark. Plus he was our lawyer (or was going to be, as soon as I got rid of Wild Bill)…and you didn’t really want to make a habit out of insulting your lawyers. Tavel simply was Tavel, and he was like a super-being to me. From the first time he came to see us, at The Pyramid Club in the East Village, he exuded wealth and power like it was a cologne. Everything about him, from his custom-embroidered Def Jam bomber jacket, to his perfect blindingly white capped teeth, told us there was another world out there, one where we wouldn’t have to grovel for scraps. That night he loved us, and just as certainly as Wild Bill was becoming a part of our past, Tavel was becoming part of our future.

The first time I went to meet Tavel at his office I was sufficiently impressed with the Times Square locale to actually soil myself. That still didn’t stop me from drawing bizarre cartoons all over some sticky-notes, and placing them where I knew they would be found later, and indeed were for years. Then the meeting started. Soon Tavel’s teeth were giving me a headache, so we decided to work together. We walked to the elevator, which suddenly opened, revealing none other than Flava-Flav. True to form, he was sporting one of those gigantic watches he used to wear around his neck. Greeting Tavel with a stream of gibberish, the two disappeared into yet another gigantic conference room.

Wow! I felt good about our new lawyer!

Next : Who knows? I am sick of embarrassing myself pretending I know what I am writing about next. Just be back in two weeks, more or less!