GWAR, Me, and the On-rushing Grip of Death: Part 37

Tensions run high in the Slave Pit. Will our hero/Dave Brockie be able to manage all of the massive GWAR-egos floating around? Also, thoughts on Kickstarter and what it means to future artists!

We are gonna get things rolling with our latest press release—spread the joyous tidings of filth! 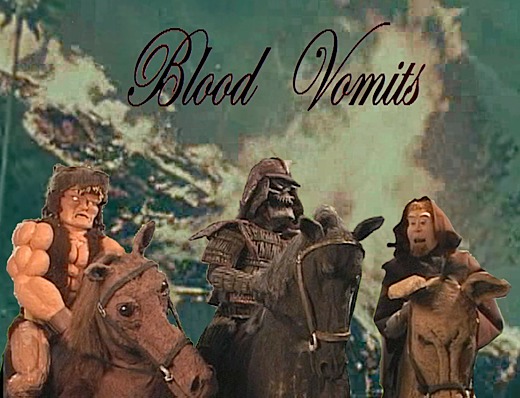 They did it! Slave Pit Inc., the production company behind intergalactic metal mutants GWAR, have reached their funding goal of $5000.00 for their latest sick side project, “The Blood Vomits.” With just a couple days left until the deadline, $7,120.00 had been raised to create a new episode in the epic story of Mad Dog, Nails, and their stalwart companion, The Vicar. The money was raised by using kickstarter.com, a website that entrepreneurs can use to present their ideas to the public and solicit them for funds. Production is set to begin immediately. Check it out for more details!

Said Oderus Urungus, lead singer of GWAR, “I heartily approve of our slaves desperate and pathetic attempts to delude themselves into thinking they can do anything other than scrape dried fecal matter off my armored war-suit. But I can’t help but notice there still is some time to pledge more money…so empty those wallets, steal those credit cards, beat the homeless. Any extra money raised is ear-marked to provide “shards” for the production crew, so you can be sure it is going to a good cause!”

But Oderus’s alter-ego, Slave Pit President Dave Brockie, had this to say — “We are pleased and delighted and very grateful to our amazing fans and the people at kickstarter.com. Slave Pit has always loved producing side projects, like the X-Cops and DBX, and this is every bit as exciting. The concept of artists getting non- recoupable advances directly from the fans who support them should make a lot of people nervous. This kind of thing, when combined with the limitless and free access that the internet provides, ushers in a new level of empowerment to artists everywhere, and I am sure this is just the beginning.”

With The Blood Vomits, the GWAR-b-que, and the Crack- a-Thon, Slave Pit is getting ready for another year of madness, and that’s with not even mentioning GWAR’s tour schedule, which includes an appearance at the mammoth Download festival this June in England. Hail GWAR! 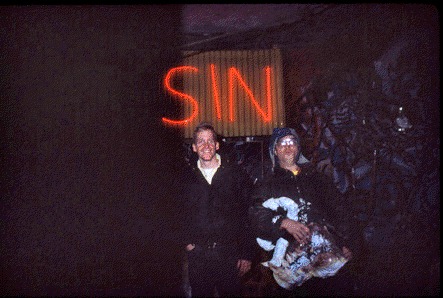 Techno and the author, somewhere in the Dairy, the Dim Time…

GWAR, Me, and the On-rushing Grip of Death Part 37: “The Sweet Stench of Suck-cess” or “Did I Use That Title Already?”

A funny thing happened on the way to the Slave Pit the other day. Well, actually it didn’t happen on the way there; I just always wanted to make that reference*, having always been fond of the play. Never heard of it? It was a popular movie as well, starring Zero Mostel. No idea what I am talking about? A Funny Thing Happened on the Way to the Forum was a musical-comedy set in ancient Rome, and had been the first real stage production I had ever witnessed. It had a huge impact on me, because it looked like being an actor was a lot of fun, especially at the end when everybody applauded you and your cast mates. It was just the kind of delusion-inducing ego-massage that a completely insecure persona such as myself craved no less than air! OK, so what transpired actually happened inside of the Slave Pit. (Our new, glorious Slave Pit, which is already humming with semi-frantic activity. The new place is by far the nicest studio we have ever had. It actually has air-conditioning, which almost feels like a blasphemy. But fuck, I dither…**)

Blob was going through stacks of photos, trying to find ones where he looked tall, when he called me over to look at one.

“I can tell that is Techno…”said Blob, his florid cheeks more livid than usual. “But who is that other dude?”

For all our conflicts over the years (he thinks I am an over-bearing ego maniac, I think he is an un-educated boob), Blob still needs me to verify faces, confirm names, and supply him with phone numbers. We also tour together, do shows, make videos, and work on props and costumes all the time. During these exchanges we pretend that we like each other. Sometimes.

I stare at the picture. That is undoubtedly Techno, grinning a grin that disguised the raging torrent that was his soul. One time Techno had gone out in a lightning storm, holding a iron rod and standing in the river. It was supposedly an ancient Norse right designed to tempt the gods into destroying you…if you survived, you were the chosen one. So there was the chosen one, but who was that guy next to him? He looked like a real dork. Stupid grin, dumb hat, poorly constructed prop clutched to his chest…

Holy fuck! That dude was me!

I stared at the picture and felt the sadness I always do when I see Techno. He was kinda like an older brother you really looked up to, constantly tried to please, and never seemed to reach. My relationship with him had started out well enough but rapidly had soured on me and GWAR to the point where he bailed to Detroit. But there were never any hard feelings from us, as was evidenced by the rapidity with which he was re-absorbed into the workings of the Pit, an entity he had created but had quickly grown to the point where we had several top-gun artists, all every bit as talented and full of ideas as he was.

I didn’t think about it too much — his energy and talent were unmistakable, and I was happy he was back. And even if he never played well with others, you will never hear anything but respect for the man come out of my mouth. Without him, there would be no GWAR, and without GWAR, I would have been working construction years ago. But at the same time tension, conflict, and craziness between the members was always a big part of the GWAR experience, and my constant clashes with Techno were unfortunately not confined to the stage. And it would be remiss of me to not report history as accurately as possible. At least as far as my drug-smeared consciousness will allow me. To whit:

One day Techno and I were riding around, looking for weed. He had only been back a few weeks and so far everything was fine. Maybe he had learned to miss us in the lonely hours he spent as a security guard in some aging Detroit automobile factory. Or maybe not. He had created some of his best comics yet using the labyrinthine backdrop of the crumbling manufacturing halls as his backdrop. As we searched for “wisdom” (also referred to as “wizzy”, yet another addition to the ever — expanding Slave Pit vernacular), we talked about how Sleazy had stepped up in his absence to play the Techno-Destructo character. When Techno had returned, we decided to go with two Techno-Destructo’s, both bent on destroying GWAR (after they had beaten the shit out of each other). We did it that way for a while, until finally Sleazy’s Techno had mutated into Bozo-Destructo. It was funny and pointless and blatantly creative, and I figured we had handled a potentially tricky transition in a diplomatic and just fashion.

“That was when I decided that I hated him,” Techno said.

I was stunned. Had I really heard that? Hate? Yes, I had. Techno hated Sleazy because he had played his character in his absence, and here he was telling me about it. I was blown away. I knew there were feelings of jealousy and insecurity but this something else…and I just couldn’t understand it.

Hate? Isn’t that something you reserve for people that rape your Mom? Isn’t that the emotion you call upon when your hate-fueled lust for vengeance upon the gang of criminal midgets that murdered your entire family drives you across three continents just to drive your thumbs into someone’s eyes? Isn’t it the opposite of love, the supposed strongest of all emotions, and therefore every bit as powerful and rare?

I was deeply disturbed. For Techno to hate Sleazy over something as stupid as that? First of all I wondered how the hell we were going to get these guys, both very important parts of the Slave Pit, to work together. I wondered if Sleazy even knew Techno hated him…and I wondered how long it would be before Techno hated me as well, if he didn’t already. It did not bode well, but unfortunately it was the same old song.

Why is it that we as humans gravitate more naturally towards the negative rather than the positive? Why do we hate more readily than love? Unfortunately one of the constant and sad realities of working with GWAR was the constant in-fighting and pettiness that has dogged the entire project since it’s inception. It was so strong that, as I have mentioned before, I really had no interest in being the lead singer, although I knew the job was made for me. Why? Because I knew whoever had that job was going to catch so much shit from the art department that their life was probably going to be pretty miserable. But I wasn’t going to be the only person who was the object of scorn, and Techno certainly wasn’t the only one that was going to give it.

By the time we had reached the spring of 1988, the festering polyps of personal drama had thoroughly entrenched themselves…everything from The Bishop resenting Thuglass for starting to go bald to the classic band members vs. artists as to what was the true selling point of GWAR. At that point not many people would have said the music and indeed that continues to this day, but hey, you try getting people to pay much attention to the music when you have the greatest show on earth!

I was disturbed by this, but at the time I didn’t realize how much I contributed to the problem with my attitude of completely ignoring it until it built up to the point that it exploded in some idiotic demonstrative public display that completely eroded any support I might otherwise of had.

In short, we were a group of deeply neurotic and fiercely independent individuals who, in order to succeed, had to somehow find a way to work together without killing each other. And with the release of our first album, the classic “Hell-o”, just around the corner, we had to figure out a way to do it fast.

In two weeks (yes, I realize I was a couple late on this one): The real Sleazy P.! Running guns to the members of Blondie! And the shit hits the fan as two amazing women enter my life…and “Hell-o” hits the streets. All of this in the next episode of…

GWAR, Me, and the On-rushing Grip of Death Part 38: “High-Butt and the Great Pumpkin”

**One of the things that is really cool about writing a project like this is that you can do that thing with an asterisk that makes people have to look at the bottom of the page, or even better makes them have to go all the way to the end of the chapter in order to find and read the special note, thinking it will impart some treasured yet obscure gem of GWAR-trivia, which at times it will, but more often than not will leave readers with a sense of disappointment and a growing inclination to ignore such literary distractions in the future. It is then and only then, after asterisk after asterisk of completely useless information, that I will finally deliver a doozy truly worthy of the punctuation, and divulge the full details of the gay love affair.***