They just do things locally to make our city better and then go work on enormous national parks in the summer. No big deal. There’s probably some German word for this feeling you get when you interview really dedicated and passionate teenagers. Something like “Dangteenerung.” It’s that moment when you can see (as a wise old adult) the young man or woman abandon the struggle to be shy or aloof or grown-up and just start relaxing into the conversation, now that the topic of conversation has shifted to the Thing That Fascinates Them.

It happens a lot with kids in programs like Art 180–particularly the ones who, before discovering said organization, were struggling to find their place within a peer group that tends to lionize sports and academics. When you talk to these kids, you start to realize that you are witnessing a crucial turning point in their lives that mirrors the turning point in the conversation. The normal “Where do you go to school, what grade are you in, what neighborhood do you live in, have you ever been interviewed before, this is how it will work, I promise I will not ask you anything weird or quote you saying anything dumb” part of the interview goes as it always goes: no eye contact, a lot of good-natured mocking of each other, and short responses.

Then, you start to talk about what they’ve been working on lately and everything changes. Their eyes light up, the mocking stops, and they even start complimenting each other.

In the case of the kids who just went to Yellowstone National Park on a work-study trip with Groundwork RVA, they take it a step farther and start getting pretty misty-eyed over how much more they want to do for their planet. 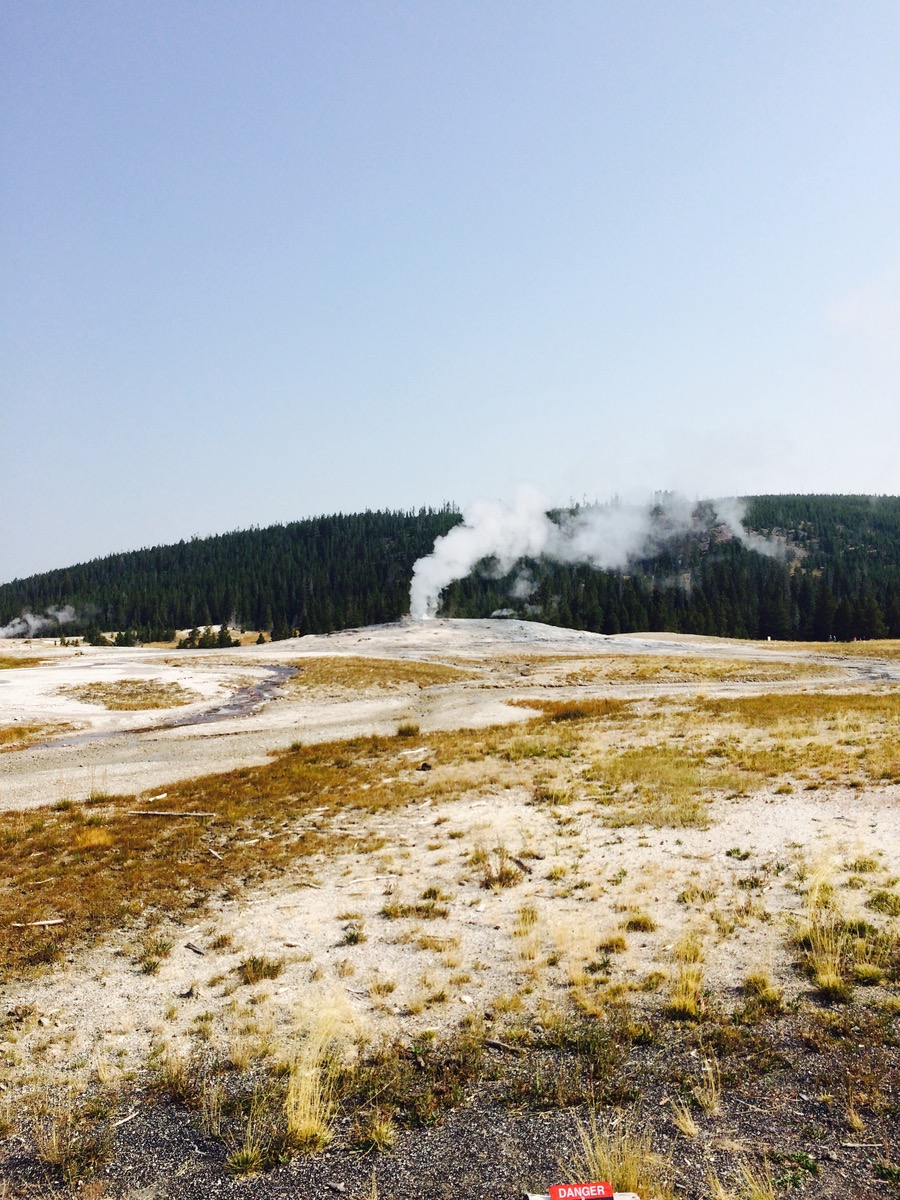 When I was a teenager, simple recycling was the thing we were all trying to get our parents to do. Nowadays, these kids cannot understand why we don’t have more community gardens! More green spaces near the urban parts of the river that act as natural water filters! And these are kids who, for the most part, live in the concrete jungle.

Sydney Vick, Anthony Varga, and Chris Gabbert are all seniors at Richmond Community High on Northside, and they’re all members of the school’s environmental club. The school’s rigorous curriculum (it focuses on lower-income students who show a lot of academic promise) makes it tough to keep extracurricular commitments, so faculty sponsor Summer Schultz is really impressed with her current crew’s dedication. She also relies on them to recruit younger kids and keep the club going.

Part of a larger umbrella organization funded by the National Parks Service, Groundwork’s Richmond chapter is headed up by Giles Harnsberger, who’s supported by Bray Wilkins. They’ve got an ambitious mission–give city teens a chance to get real work experience on environmental projects that in some way benefit a the city’s ecology. Between them, they handle about 30 high schoolers from Richmond Public Schools like Community as well as Armstrong High in Church Hill and George Wythe on Southside.

Powhatan native Bray already knew he was into being outdoors–an extended stint in Albuquerque made him feel “small in a good way,” when he walked outside, and he was determined to bring that kind of awestruck respect back to people in Richmond. Working with kids, though, was a little more intimidating.

“My first or second day on the job, we went to West Virginia for a youth summit with two kids I’d never met before, and that was my intro to Groundwork,” he remembers. “I was terrified.”

Now, he’s figured out his vibe–being goofy and talking to them like adults is the best way to encourage respect while letting them have fun. But if you tell Bray that he’s got a strategy and is probably a really successful educator, he will most likely say something self-deprecating and move onwards. This authenticity and utter humility is probably the reason for his success, which is obvious, because after a two-week long trip to Yellowstone with him, those kids are both inspired and inspiring.

Kids are drawn to Groundwork projects for various reasons, and those reasons have been known to change over the course of the project. Sometimes, they just want a paycheck (Groundwork does pay the kids for Richmond-area projects), but they tend to fall in love with the hands-on aspect of seeing something change for the better.

Projects include the creation of a geological timeline that will end up on the Belle Isle footbridge, educating tourists and Richmonders alike on all the things that happened here before we built the bridge, settled the city, or even knew how to build bridges or walk on two feet! Or designing and building a pocket park on 25th Street. Or a walking trail behind Mosby Court. Or an outdoor classroom at Community. These projects are all in various phases of design and implementation, and mentioning any of them gets everyone very excited.

Anthony and Chris shared a tent in Yellowstone–they had never been to the park before (and neither have I–to which they responded with astonishment that I must go. And they were so convincing, even after knowing me for only a few minutes, that I started calculating vacation day balances in my head before the interview was even over). “It was too short,” says Anthony wistfully. He’d been to Shenandoah Valley on camping trips with Groundwork twice before, and it was beautiful, he reports, but he wasn’t prepared for just how stunning Yellowstone would.

This was a recurring theme with Chris and Sydney, who are both softer-spoken. They’d been told by their fellow club member Mikili Lee, who went the year prior, to expect serious views. But “a cold river meeting a hot river so that it forms the perfect temperature for swimming” is basically impossible to really picture in your brain. A “natural hot tub,” sure. Is there a friendly wood nymph ready to fold your clothes while you take a dip? “But once you get there, that’s really what it is. A natural hot tub!” says Chris.

Their list of amazing experiences gets really long. “We went to Bunson Peak and night and got to see our moon shadows!” “We woke up to our tent frozen!” “We saw a mother wolf and her two babies, and they were both jet-black, but she was grey and white!” “We had buffalo jams, where the buffalo were crossing the road and we just had to wait in the car until they were finished!”

I’m really hoping they don’t take this the wrong way–considering these kids are going to be leading the entire world in 10-15 years–but it so reminded me of conversations with preschoolers. In the best possible way. Adults tend to lose the feeling of pure joy when they experience something new, and I think we try not to betray our previous ignorance by learning towards the blasé. I wish I understood why. Maybe because other adults are quick to jump in with, “Oh but here’s what I saw in another place.” Teens still have such a roaring undercurrent of appreciation and enthusiasm beneath the layer of toughness. And when I asked them if I could see any pics, that undercurrent burst forth like the videos of Old Faithful they leaped out of their chairs to show me.

And they weren’t kidding when they used the word “breathtaking,” because, wow. 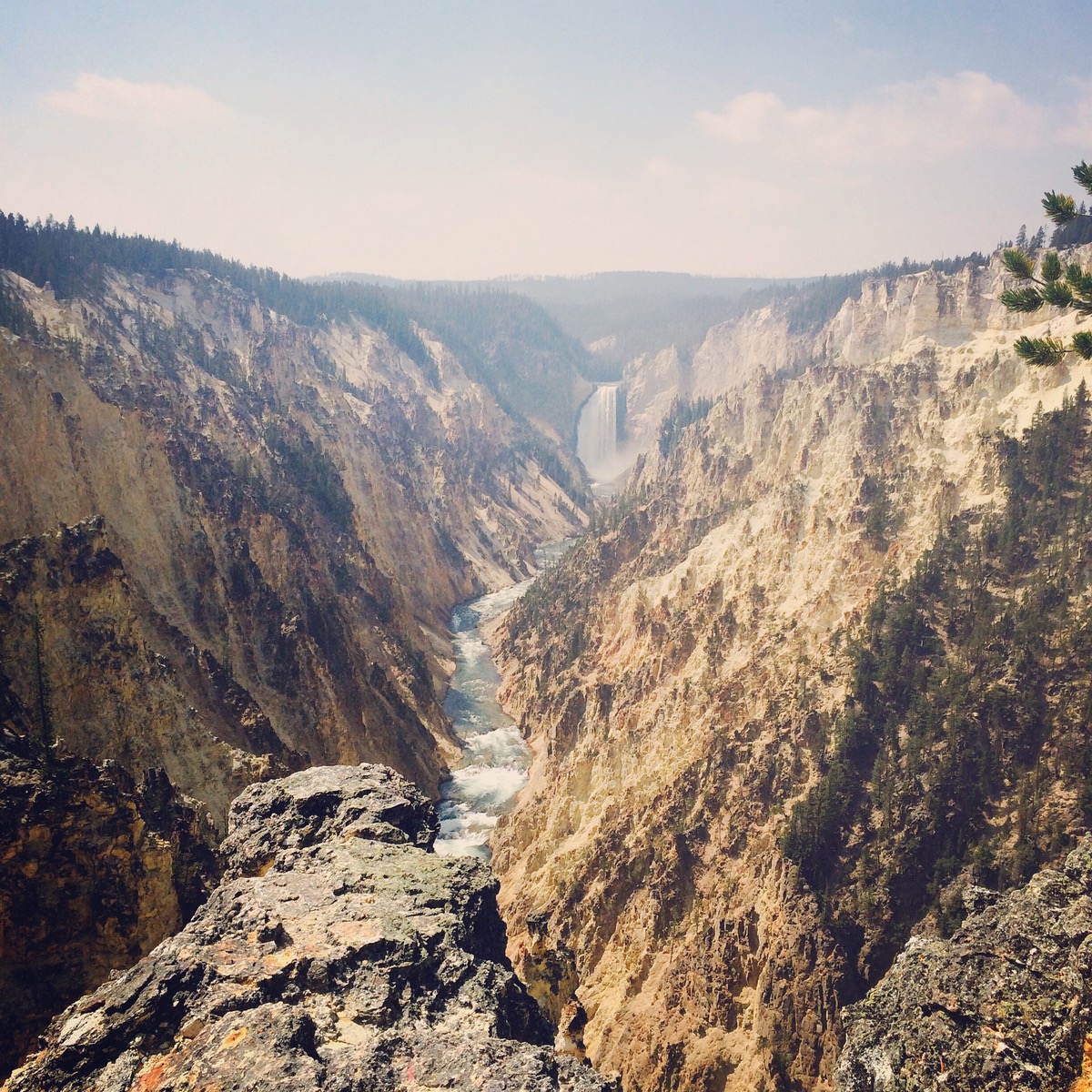 The trip wasn’t just for sightseeing though. They actually had only a couple of days to explore on their own. The rest of the trip was earmarked for helping the park with a number of projects that, to the layman, sound not only arduous but surprising even in their very existence–a lot of hard work on something probably 99% of Yellowstone visitors take for granted. 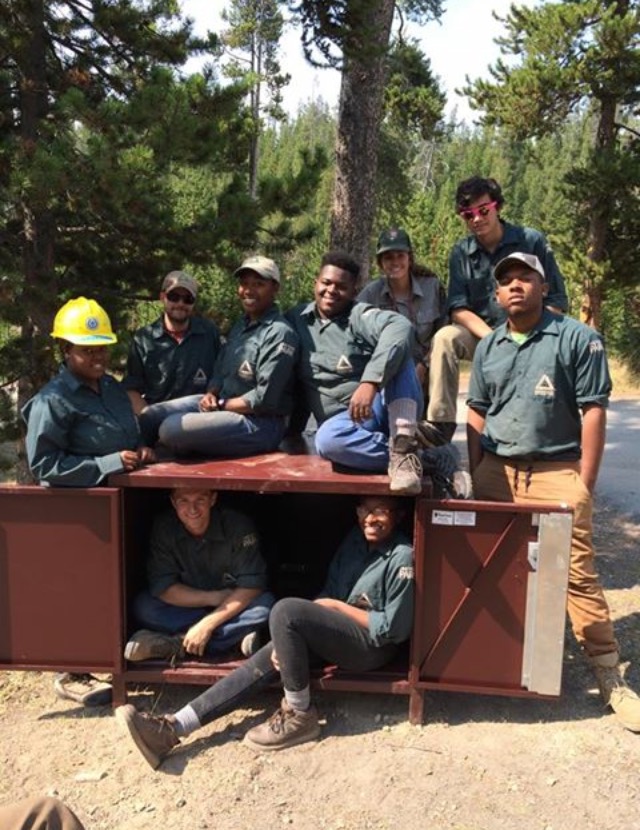 Chris and Sydney are the ones in the bear box. Anthony is the one in the rad shades.

Debarking a log, for example. Anthony and Chris immediately go into a demonstration of the repetitive motion involved–sort of like being on a rowing machine. I envy them their young backs. Sydney is quick to point out that it may seem really tedious and difficult, but it allowed them to sit all day and get to know their fellow debarkers. The team included students from all over the country, including Denver, New Mexico, and a lot of other places with markedly different ecosystems than Richmond’s. “We all came here because we had similar values,” says Anthony. “But I didn’t expect us to be so alike. It was so cool because we weren’t that different.”

“It was actually really fun and great to connect to people when there’s nothing else around,” Chris says. “The only way you feel comfort and secure is to be with other people you’ve never met before, which is a crazy feeling.”

“But, at the end of the day,” he reminds me. “There are maybe three bare logs.” It’s very hard work.

Installing newer, more secure, and bigger bear boxes, each about 450 pounds, took at least five people. They show me the rocking motion you had to do to loosen the old one and get it moving.

Everyone was a little annoyed that they didn’t get to see a bear (except Bray, who said that the year before, they’d seen a grizzly get way too close for comfort). But those wolf pups, though.

Taking the work back home

It’s not easy coming back after your dream vacation, even one that requires so much physical effort. When I ask these young men and woman what they took away from the trip or any of their experiences with Groundwork or the environmental club, they sort of shrug. But Summer steps in and says, “I don’t know if you guys even know you do this, but every single one of you stops and picks up trash automatically. Do you notice that?”

All three look genuinely bewildered and say things to the effect of “Not everyone does that?”

Well, of course they don’t, guys! How do you think the trash gets on the ground in the first place! Literally every human is terrible except these three kids–I can’t decide if that gives me hope or if it fills me with despair. 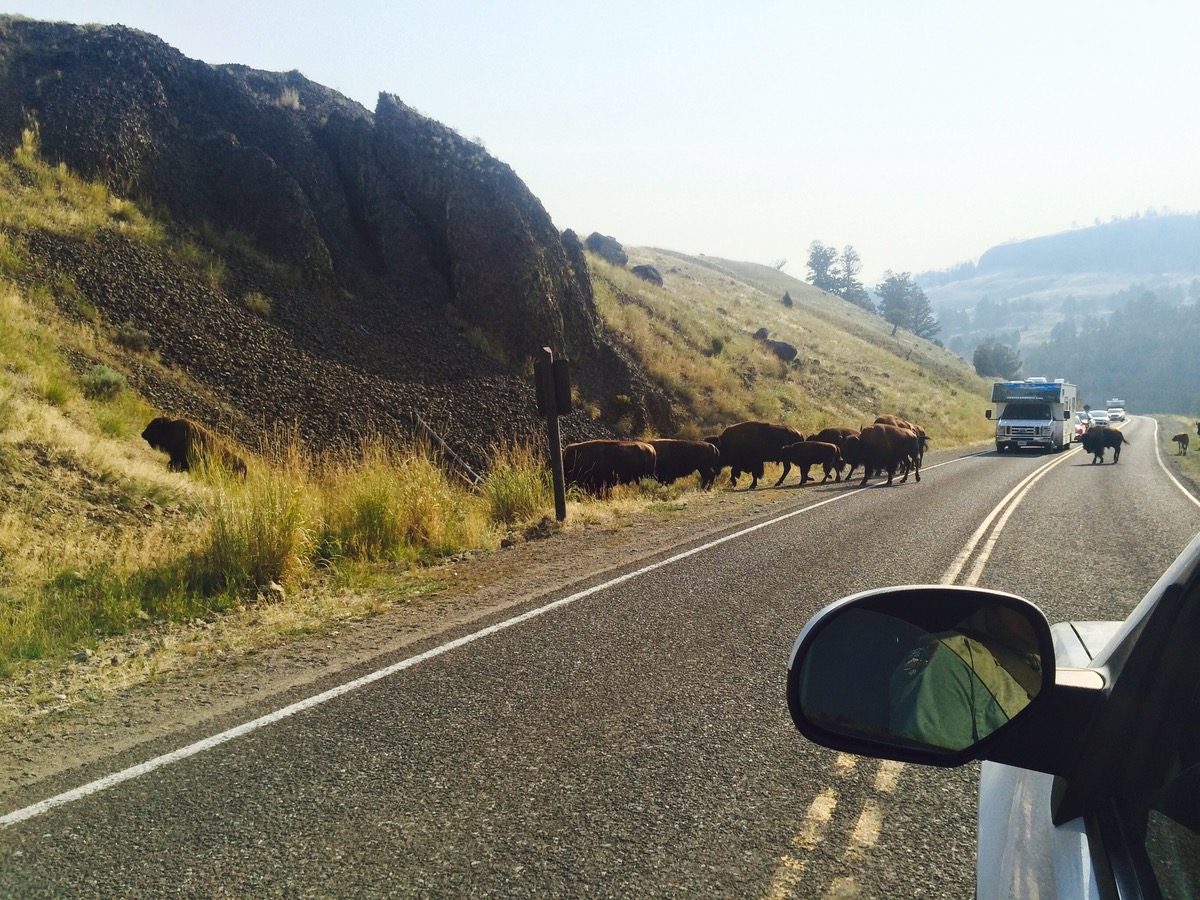 Sydney talks about how she has new respect with the sheer number of man hours it takes to do something as simple as put down paving stones. She’s always telling her friends “I know from experience that somebody took a lot of time out of their life to do this,” but she wishes more of her peers would get personally involved with creating the beautiful and useful things themselves.

“I know that my experience impacts others,” she says. “I know that it will do something. But it’s not the same as if they did [this kind of work] themselves.”

All three have plans to go to college and work on humbling things like aerospace engineering or becoming a surgeon. Sydney is ready to fight the good fight and teach either English (to which I cheer!) or science (to which Summer cheers!).

It’ll be exciting to see what they’re able to do for the world, and I’m betting we won’t have to wait very long before they get started. Maybe it’s the kids who experience Dangteenerung who are most likely to succeed, or maybe their job is to motivate the rest of us to succeed a little more than we currently do.

Visit Groundwork RVA online for more info. They will probably not turn down a donation or two.