It’s hard to be in your twenties. No, for real! You know when you’ve graduated from a small liberal arts college, and the world is your oyster? You move to New York (or Chicago or LA or Richmond) with your best friend and proceed to enter into College II: the weird transitional space between childhood and adulthood. College II begins post-graduation and lasts until you move in with a serious life partner…or until your BFF does. It’s full of parties, sleeping on couches, and restorative visits back home. As you near commencement, you find yourself thrown in more and more with people who have babies, stay in hotels when they travel, and rarely show up to work hungover.

A period of depression ensues. One Saturday morning, you wake up really early and decide not to go back to sleep. You buy GRE prep books, learn how to balance your checkbook (and why you really have got to do that more often), and start taking an interest in your own career.

Damn, it is a magical time! And such a specific part of a specific demographic’s life. 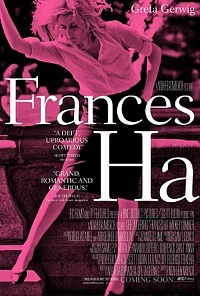 If College II is your alma mater, you’ll probably like Frances Ha a whole helluva lot. And if you’re a woman, too? Prepare to feel things.

Director Noah Baumbach isn’t one to shy away from symbolism. His The Squid and the Whale backs up its poignant title with a scene where a character quietly considers the actual diorama to which it refers. Yet, like TS&TW, Frances Ha is so charming and genuine that cliches become welcome, familiar tropes. And, jeez, you sure can’t say that about every movie.

Frances (played by Greta Gerwig, who co-wrote the film) “has a hard time leaving places,” like…I don’t know…the gleefully eccentric days of one’s mid-twenties? She’s paralyzed when her best pal Sophie (Mickey Sumner) decides to move out of Brooklyn (perish the thought). Desperate for some companionship, she blunders awkwardly between trust-fund roommates, a dancing dream she’s clearly not qualified for, and dinner parties with people who have savings accounts. She goes backwards, sideways, and often nowhere at all, with hopeful eyes and a cheerful voice that’s impossible to despise.

Guys, this film totally gets me. Me…and everyone else I know. And it could have foundered under the weight of so many tropes (and there are SO many). But Gerwig is mumblecore’s favorite actress for a reason! Her awkward earnestness is super real, and she lumbers around New York like a gangly, newborn colt (not inaccurate!). Her genuine energy adds color to Baumbach’s objective, black-and-white, digital filmmaking in a combo usually reserved for cult heroes like Jim Jarmusch.

The film’s 86 minutes feels longer, but not in a bad way. It hops continents and collapses time with tightly edited sequences while still managing to feel measured. Even though you know how it’s going to end,1 it feels so good when it does.

Your twenties, guys, they can’t last forever, and you should silly it up while you can. Just don’t fight adulthood when it starts to come around.

You don’t really understand why you and your best friend can’t still have an apartment somewhere, ready for you guys to come hang out, swap inside jokes, and ignore the texts of your harried spouse, who wants you to come home and tend to your children.