Find a moment in Richmond history within the Valentine’s archive

Spend a couple of hours plumbing the deep, photographic recesses of Richmond history. It’s easy, it’s fun, and we can show you how. Bear with me. This story is going to start out as an Interesting Moment in This Author’s Life, but the end goal is to introduce you to a valuable local resource.

But at least it starts out at Christmas, before which I hit upon an idea for a gift for my significant other. George Harrison1 not only is impossible to shop for but also hates surprises. I decided he needed an experiential gift–one that I can tell him about in advance, involves something he might like to do, but would still end up resulting in some sort of keepsake. A surprise that he got to choose.

Ugh, it’s all so annoying and confusing, but as he is the greatest Beatle, I was resolved to press on. With the help of my sister,2 whose brainchild this whole excursion really was, I capitalized on his love for:

…and made an appointment at the Valentine to rifle through their photographic archives. My sister informed me that we could select a photo and then pay to have a print made, and that sounded like something that would appeal to George’s soft, Richmond-loving heart: a couple of hours surrounded by stacks of photographic history.

“What kind of photos are you looking for?” asked Meg Hughes, Curator of Archives. “We can pull out some specific groups for you to get you started.”

I mean, I don’t know. Old photos? The looking experience was half of the point of my gift, so I didn’t want to get too granular. George had no preference, and all I could think of was “People in funny clothes, building the Jefferson brick by brick,” so I said something to the effect of, “Not sure! LYLAS!”

And then like a month later when we showed up for our two-hour appointment, I felt truly dumb. 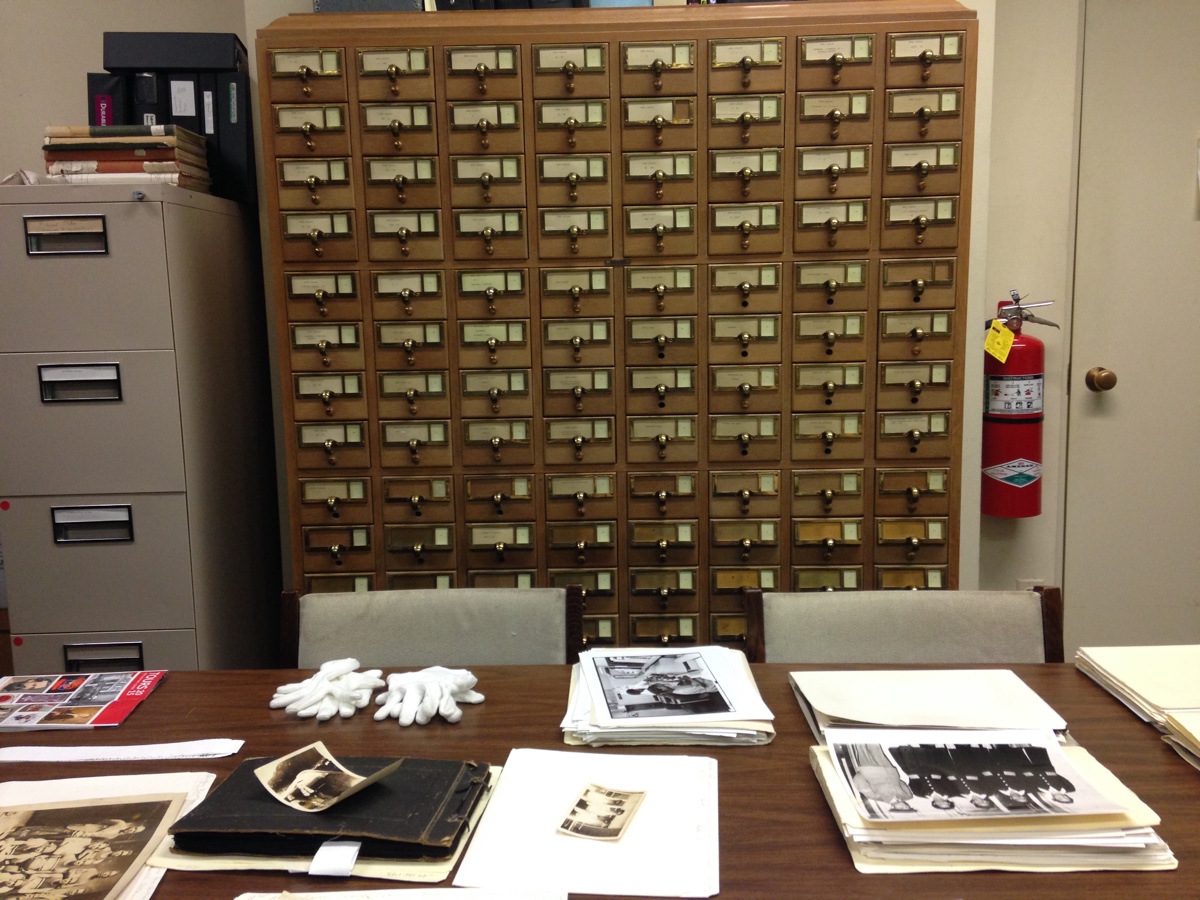 Our research post in the archives after we’d selected some photos.

According to Meg, the Valentine estimates that they have more than a million photographs, about 20,000 of which are digitized. That means 980,000 photos to look through physically with a cotton-gloved hand. She and research assistant Kelly Kerney had neatly and probably without laying a curse on us set out a few manila folders that were pleasantly full of photographs. “We weren’t sure exactly what you wanted, so we got out some street scenes, streetcar stuff, and people to get you started.”

It’s a good thing they saved their curses, because before I’d left the office, my boss asked me to come back with some historic photos for our Black History Month pictures of the day. Like Columbo, I had asked my Curious Journalist questions about the process and we were about to don our gloves and get flipping.

“Just one more thing,” I didn’t say that actually, but I wish I had. What I really said was something like “I”m so sorry, I have to ask for help with another thing while we’re here.” I explained what I wanted–historic photos of African-American Richmonders, particularly those connected to a business.”

Without batting an eyelash or doing that “long, measured exhale though the nose” thing that I definitely would have had to stop myself from doing, Kelly produced two big boxes from the Witherspoon Collection. She showed me the stickers that meant that everything in those boxes were digitized for easyish pulling, should we find something we wanted. 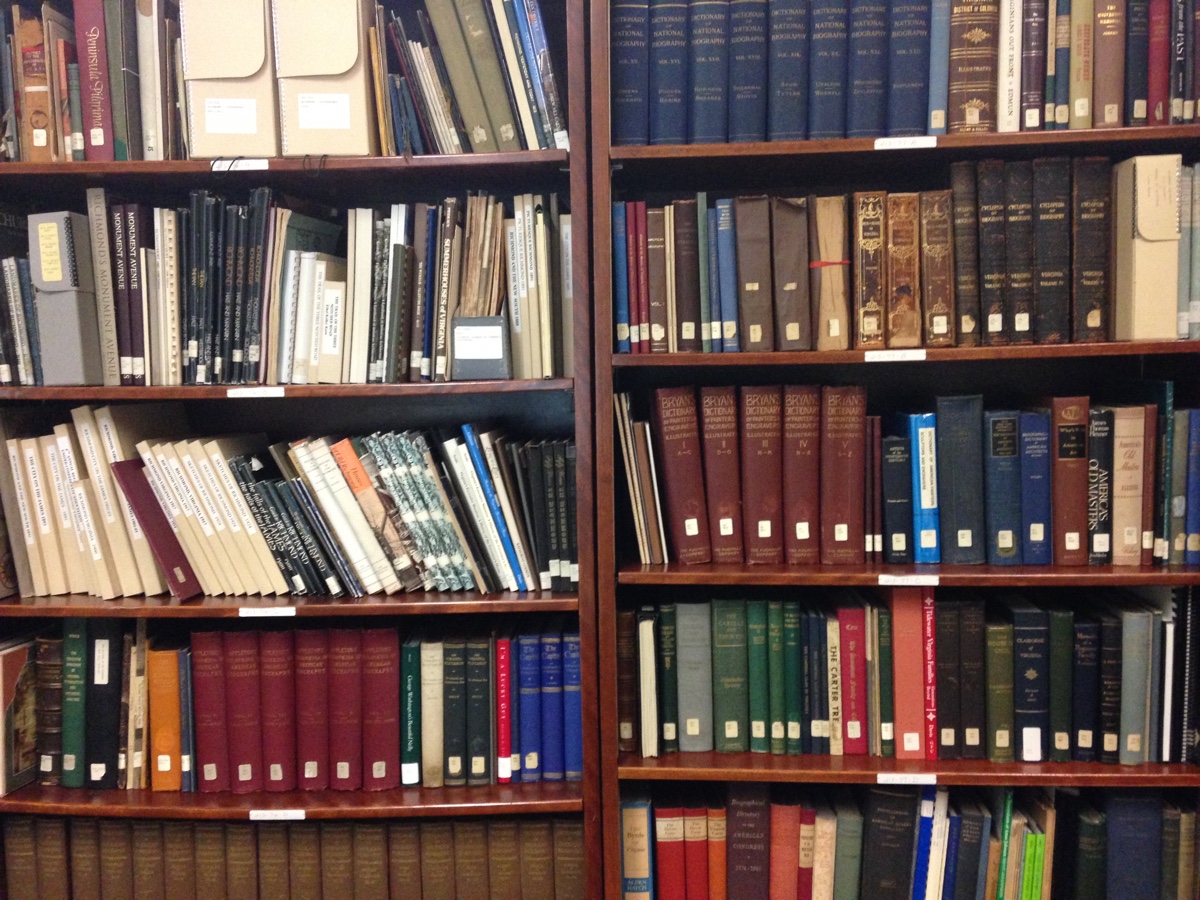 The archives are divided into reference materials, photographs, and primary documents. There are many, many shelves like these. Luckily, you are not expected to navigate it.

And that was it. Well, that was the starting of it, anyway. We sat there for the next hour and a half, gingerly turning over photo after photo, setting aside ones we wanted copies of, and saying a lot of “Oh, whoa,” and “Wow, is that

Speaking of which, the Valentine archives have one whole section that’s organized by street, like some sort of historic Google Earth.

Many of the photos were donated (I looked through several that were glued into ancient and crumbling albums) and many are old Times-Dispatch photos. A ton of them are online , but when you realize the sheer volume of two-dimensional people, objects, and landmarks that are represented in all the drawers and shelves and stacks around you, it can get overwhelming. Kind of like you’re in the middle of Richmond constantly building itself. It helps that the actual room feels like a cozy spot in a university library, instead of Gringott’s or the Labyrinth or whatever it was I expected. You pipe up when you have a question for Kelly or Meg, as they quietly do their work, but otherwise you just lose yourself in what you’re doing.

It’s pretty crazy that anyone can do this. And I mean anyone. It costs $10 per person, per research appointment (no charge if you’re a member), and there are only four-hour windows during which you can have your appointment, four days a week. If your needs are very specific, and Meg and Kelly’s computer-like brains knew exactly what to pull for you ahead of time—maybe then you could wrap it up pretty quickly. But if you’re more general, you may need more time. For our project, we used two hours, but could have been there way, way longer. We had not hit a wall. 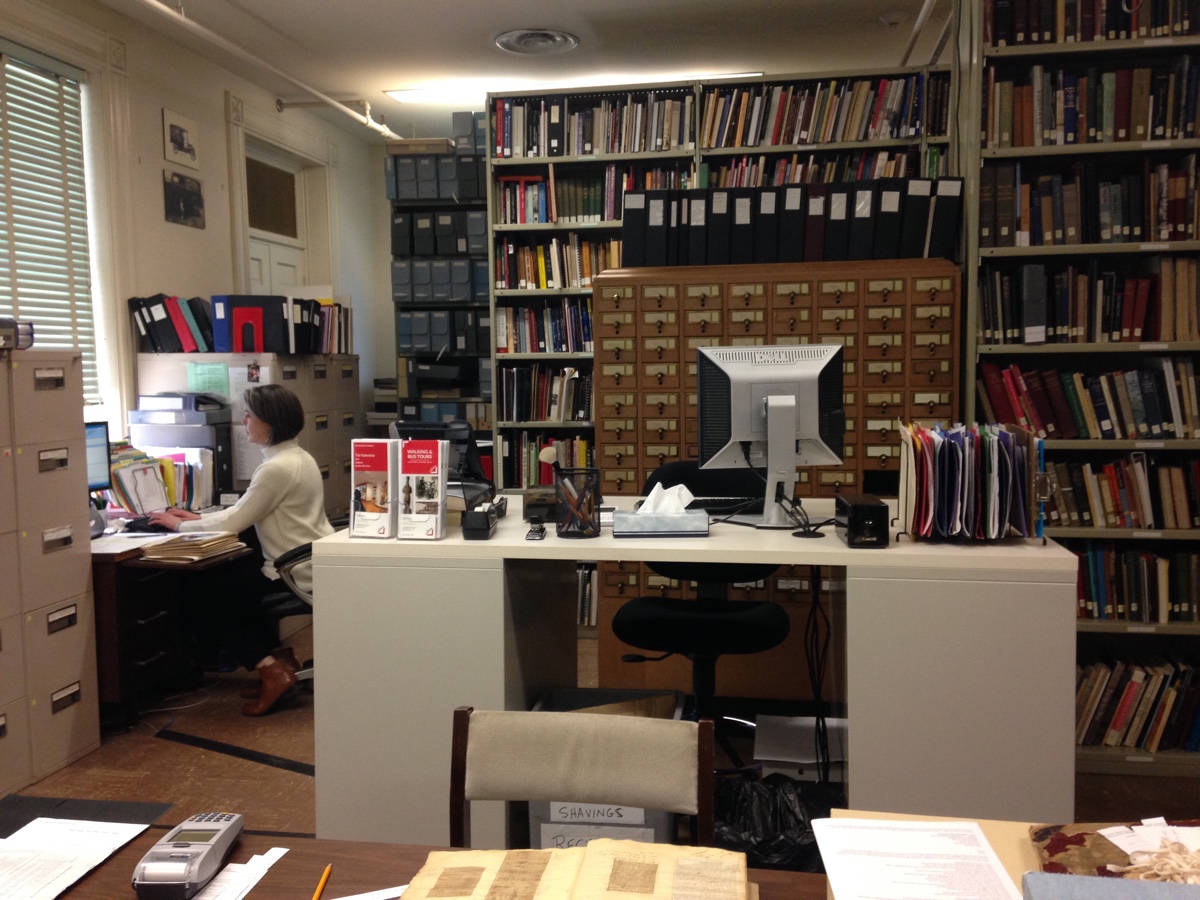 Meg Hughes doing things that a genius does and answering questions as you meekly come up with them.

George fell in love with a photo of workers laying the streetcar tracks on 1st and Broad at the turn of the (20th) century. He was lucky–he found something fast. My goals were easier to pinpoint, so I had no trouble selecting a bunch of historically significant photos for our series from the initial boxes Kelly pulled.

A large portion of their outside researchers are involved in academia, whether professors or students. Some are press, like myself, and some are writing books. They see about 200 researchers a year, and those are just the ones who couldn’t find what they were looking for in the online archive. You can just be an Average Josephine, though. No one will be checking your credentials at the door.

We made our final decisions just before our two hours was up, and selected a print size from their price sheet ($28.50 for a glossy 8×10, other options include digital versions, bigger sizes, custom scans, etc.). We said good-bye, and that was that.

A couple of days later, Kelly had finished putting everything on a disc for RVANews, including all the info they had for each photograph.

Listen, I’m an adventurous person. But the idea of emailing a stranger (archives@thevalentine.org) and making an appointment within a museum (12:00 PM or 2:00 PM, Tuesdays through Fridays) still seems daunting. I am here to tell you, however, that it’s an easy, pleasant, and satisfying activity–even if, like it was for us, the thrill is just in the search.

Start online if you have a pretty good idea of what you’re searching for (or if you just want to look around). Email archives@thevalentine.org to set up an appointment and don’t be afraid to get specific. They are there to help.