FeastRVA looks for help to keep bringing ideas to the table Bringing ideas to the table is not just a catchphrase, but the goal of FeastRVA. And they’ve recently launched a crowdfunding campaign to permanently secure its seat at Richmond’s creative table.

Created by cofounders Johnny Hugel and Josh Epperson, FeastRVA held its first event in September 2011. “We realized that one thing Richmond was missing was a way to bring passionate people together under a single roof and put them in contact with others with similar passions, talents, and interests,” said Hugel.

Here’s how it works: before each event, around a dozen project proposals are submitted. A FeastRVA panel typically selects three-to-four proposals, focusing on those that are creative, community-focused, and most feasible.

FeastRVA then sells 50 tickets at $25 for people to hear representatives from those proposals talk about their project over dinner inside the gallery at Black Iris Music.1 “At the end of the night, a vote is taken, and the project with the majority vote is granted with the profits from the ticket sales,” Hugel said. Previous winners include Dollop Desserts, McDonough Community Garden, and Compost RVA.

“What we love to see are [people with ideas] who ask themselves ‘what’s the first step that I can take?'” Hugel said. Although FeastRVA can only award prize money in the hundreds of dollars, that’s often enough to get a good idea going. “Often we find that the very first step in a project doesn’t cost a fortune. Usually, it’s a piece of equipment, promo material, a license, a tool. When presenters start thinking in small steps we believe the ideas stand a better chance of success. Starting small to make big ideas happen is what we’re all about.” 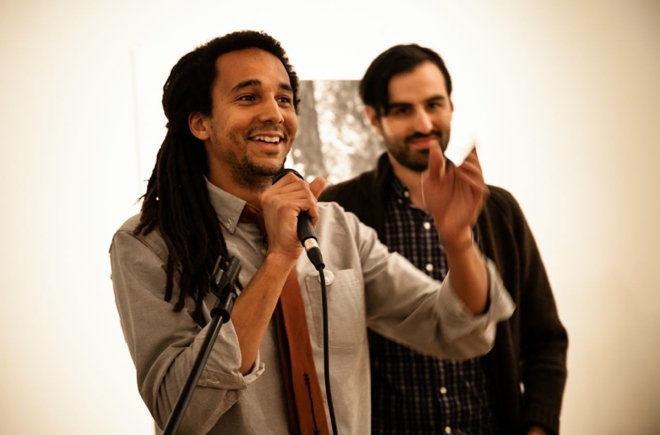 FeastRVA has raised over $3,500 for six projects to date. But Hugel said money is not the only benefit. Even projects that don’t win funding still get a chance to network and describe their ideas to people. He said that “at least one idea that didn’t present has grown out of attendees sitting next to each other.” That idea is Pedal Pops, which debuted earlier this year.

But the evening isn’t solely about the presenters, Hugel said. “The crux of the concept was to bring Richmonders from different walks of life together to encourage greater collaboration and we figured there’s no better motivator than food (and money),” he said. “Dining is the literal extension of our goal of bringing creatives to the same table.”

FeastRVA has relied on the generosity of local resources to set that table: vendors providing food and drink, other organizations loaning tables and chairs, audio-visual equipment, and more. “This support is what has allowed Feast to grow and thrive, but in order to sustain, we believe that we need to take the next step in building the foundation of the organization,” Hugel said.

In addition to applying for nonprofit status, FeastRVA recently launched a crowdfunding campaign to generate capital that the group can use to purchase its own equipment (see promo video below). Hugel said this will give FeastRVA self-reliance and insure its longevity, as well as provide a foundation for eventual expansion.

“We also want to give back to the community that has been so supportive of us, and having our own stuff will allow us to easily help others as we have been helped,” Hugel said. “At the end of the day, we’re asking for support to bring creative change to the community we all love.”