After too many years of spreading their family talent across the country, brothers Trevor and Marty Davis are finally dancing in the same company—our very own Richmond Ballet. Originally from Sacramento, California, brothers Trevor and Marty Davis are, for the first time ever, about to take the stage as a team. No, they haven’t lived a movie plot of growing up competitors, having a falling out, then reconnecting in a burst of emotion. Believe me, I tried hard to get them to admit it. In reality, they are two very sweet guys who smile a lot and speak so humbly about themselves, you almost forget that they are powerhouses of artistry. They’d always dreamed of living in the same town and dancing for the same company, and this year, Marty joins Trevor as a company member of Richmond Ballet.

I sat down with the Davis brothers and learned a little more about what it’s like to have a sibling that’s a child prodigy with the exact same talents you have. Spoiler alert: it sounds pretty great.

Just a note: the line breaks in their responses indicate pauses that weren’t there. Trevor and Marty do a great job of finishing each other’s sentences. And a LOT of happy smiling. And downcast eyes and blushes when you compliment them. They almost made me believe that dancers are regular Joes and not mystical superhumans. Almost. 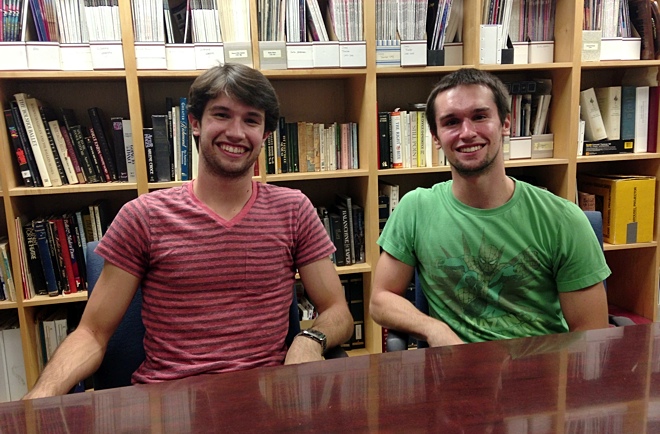 Tell me about the rest of your family. Is everyone into dance or was this a new thing for you guys? How did you both get into it?

Trevor: Our mom got us into it in Sacramento. We started out tap-dancing.

Marty: Each day we would do something different—tap, jazz, and after awhile we just stuck with ballet.

T: I think it was the most challenging.

M: Once you learn the steps in tap, it’s up to the person to come up with rhythms. But with ballet you had to work hard to improve.

Did things ever get competitive between you two?

T: We were always really supportive of each other. If it ever got competitive it was more like a healthy competition. We’d go try and out-jump each other in class, so that’s always fun.

Trevor, why did you choose Richmond Ballet from all the other places you could have ended up?

T: I auditioned at a lot of places in New York, but then [Richmond Ballet] offered me an apprentice position,1 which I took. And now this is my fourth year in the company. Honestly, it was a really great offer. They had free housing for apprentices which was really attractive to me, and I had been researching companies. It seemed like a really good place to start.

I remember that you really stood out for me for the first time in the production of Rodeo a couple of years ago. You were really sunny and such a good complement to Valerie Tellmann–what was the casting process like for that performance? Did they know you would bring a lot of personality to that role or was it something you did on your own?

T: I just think they thought I would be a good fit. They gave me a guideline, and I just sort of played with it and did what I thought would be good with the part.

Do you like the acting roles? I’ve talked to some of your colleagues about how they really like to take on roles that let them act, whereas other dancers say they find those the most challenging.

T: I do, I like the acting roles, actually. I really enjoyed being the jester in Swan Lake [2012-2013 season]. That was my favorite part so far.

Marty, what’s it like joining up with a company where your brother has an established reputation? Do you have similar styles? I know with my siblings, we always try really hard to differentiate ourselves from each other. What can we expect from you this season?

M: It’s cool, because we’re at the same level now. I was at the Kansas City Ballet for a few years, and I got to do some soloist roles. But now Trevor’s coming up and they’re giving him some opportunities. So now we’re both at the same level, and you can feed off each other. So now I’m learning from him.

He’ll say, “This works for me, you should try it.”

What’s the process been like to get you both together in the same place? What’s been your take on Richmond so far?

T: Marty came to visit a lot from Kansas City, and we’d stay together for the summers in my one-bedroom apartment. But now we live together, and we have more space and it’s been fun!

M: Our schedules were hard to coordinate, so we haven’t gotten to see each other perform much. He’d be performing while I was working so it never worked out. Last year was the first time I saw the Nutcracker!

T: We’ve always wanted to get back into the same place, because we grew up dancing together and it just feels natural. And everyone’s really welcoming here, it’s like a family.

M: Richmond feels smaller than Kansas City, but I think I like that. The company is a little smaller so you have more work to do, but I think I like it that way. It keeps me busy doing more choreography, and it just makes me feel like I’m using my body and my mind more. Plus, we learn different spots within a piece, so…say I’ll learn Trevor’s part in case somebody has an injury.

Tell us what you’re excited about for the upcoming season.

T: I’m looking forward to Rite of Spring [Aiello/Stravinsky], and I’m hoping I get to do Fancy Free [Robbins/Bernstein] because that seems like a lot of fun. It’s about sailors getting off the boat and trying to woo the ladies.

M: I’ve heard so many good things about Fancy Free, and I think that would be a great thing to dance on stage with Trevor.

We both went to the Boston Ballet School.

What can we expect from your different styles?

T: Yeah! But we haven’t gotten to perform together, ever. Not even in school. (We were at Boston Ballet’s school together for a year). This will be our first time.

What do you think about the Studio Series? Sometimes it’s hard to get people to imagine ballet as anything but the Sugar Plum Fairy. Do you have any advice for people who might be interested in the Studio Series but haven’t quite decided to try it out?

T: With the Studio Series, it’s always something new and interesting.

M: And it’s not necessarily classical ballet, so if you don’t like that style, you might get something different!

T: And every studio performance is different, so it might not be the same as the last one you saw.

Catch both Davis boys in Richmond Ballet’s Studio One, which includes the triumphant return of Bow Out and another world premiere by alum Philip Neal, whose Gargoyles blew everyone’s minds a couple of years ago. The performances begin on Tuesday, October 1st and end Sunday, October 6th.