DROP THE NEEDLE! Round 3!

It’s back! For the first time in more than a year, Drop the Needle is back to RVAjazz. We invited Toby Whitaker to judge and we asked him a few questions along the way!

It’s back! For our third ever round of Drop the Needle, we invited trombonist Toby Whitaker to be our judge. Whitaker is a member of legendary salsa group Bio Ritmo and Os Magrelos.

It’s the perfect time for Toby Whitaker to judge:
1) He cleaned up the previous DTN with three winning submissions. (You’re welcome future submitters.)
2) The Toby Whitaker Big Band is performing on Wednesday August 3rd at Balliceaux.
3) After more than a decade in Richmond, he is going to graduate school at Rutgers for jazz performance with a lot of emphasis on arranging. He will be assisting with various ensembles and studying with the incredible trombonist Conrad Herwig.

With this series, we hope to create a forum for Richmond musicians to track the city’s improvisational scene. Part mix tape, part musical journal, part contest. Call it what you will, DROP THE NEEDLE is open to everyone in and around our beloved city. Here are a few ground rules:

You graduated from VCU in 2001 and you went to High School in Richmond, how has the music scene in Richmond changed during that time? What would Drop the Needle have sounded like ten years ago?

As long as I have been in Richmond there has always been a pretty active music scene just through VCU supporting the community. The main thing is, when I first started at VCU there were always talented musicians, but the biggest thing that has changed is more of the guys putting together bands. Putting together actual original ensembles, back then it was still a lot of good players and a few good bands but it was a lot more straight ahead jazz stuff. There were a few pockets of cool stuff going on. Brian Jones has always been around and has always been putting out stuff. There were a lot of talented musicians but not a lot of guys putting together bands like Fight the Big Bull.

Can you talk about your experience with trombone/ music from the time you started playing until now?

I started in middle school. I always really enjoyed it, but I really didn’t take it too seriously until late high school because I was trying to get ready and figure out what I wanted to do in college. It was pretty much the only thing I enjoyed and so I started working on my practice habits and taking lessons. Once I got to VCU, I was playing catch up as far my own technique was concerned. I did take a theory course at Randolph Macon my senior year in high school, which at least helped me have a head start with theory and ear training. That helped me make up for my lack of playing ability when I got to VCU. 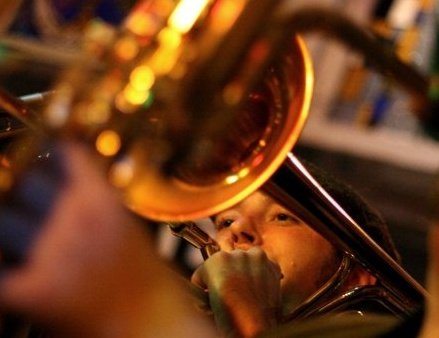 You are a member of Bio Ritmo, Os Megrelos and you have been playing with No BS!. Now that you are leaving town, what do you hope to gain at Rutgers?

It’s no lack of love for the music scene. With the little bit of travelling I have done around the country, I have never found a spot as cool as Richmond. The whole grad school thing is about giving me a little time to focus 100% on music. Living in Richmond, I have been really lucky and I have played with a bunch of great bands but I also find myself having to work day jobs from time to time. I kind of get distracted. I can do that for a few years but I really want some time to just sit down and reevaluate things. I don’t really have grand ambitions of leaving Richmond permanently. Also, I am still going to be performing as much as possible. I’ll be riding the bus a lot on the weekends.

What are you listening to right now?

I listen to a pretty wide variety of stuff. I grew up more out of the rock genre. Growing up I loved the Beatles and Pink Floyd. I didn’t really get into jazz until later. Right now it is a really weird mixture of Velvet Underground and Thad Jones Big Band. Just getting back into more traditional stuff: Mingus, Ellington and Thad Jones.

What do you hope to hear in the submissions for Drop the Needle? Is there anything else you want people submitting tracks to know about you?

I am looking forward to hearing a wide variety of stuff. I am open to anything as long as it has some sort of original idea behind it.

The deadline to get your tunes in for this round of Drop the Needle is 11:59pm on August 18. Get going!