There’s a new Hamlet in town. And she’s got two X chromosomes! A female Hamlet is nothing new–females have been playing male Shakespeare roles for a long time. Except, wait a second…is this Hamlet wearing a skirt? Could this be…an actual female Hamlet?

Yes, says Jan Powell, Quill Theatre’s Artistic Director and director of this production, which rounds out this year’s annual Shakespeare Festival at Agecroft. Yes, Hamlet isn’t just played by a female–she is a female.

Powell believes that this brings the themes of, arguably, the finest play ever written1 into a context that we as modern Americans can better understand. It’s a little complicated, but bear with me.

She’s chasing a lifelong fascination with the evolution of ancient monarchs into modern royals. “The changes that we’ve seen the British crown go through just in my lifetime has been astonishing…these ancient figureheads that we love and have allegiance to–when you’re modern people who are living real lives just like the rest of us, how do you fit into that box without crushing and upsetting your populace,” explains Powell.

And furthermore, why do we as Americans care so much? Are we intrigued because we can’t relate? Or are we a little jealous because we have no princesses to throw flowers at? Or do we just like elaborate hats?

Powell feels that a 2015 American audience of Hamlet wouldn’t ever be able to really understand why a Prince of Denmark would be frustrated by a hapless love for a commoner. Kate Middleton was a commoner, and the world is deeply (even a little creepily!) in love with her. It’s just not that big of a deal these days.

But hey, if Prince William had come out of the closet and decided to choose a dude to be his spouse–not sure the family would be as welcoming. 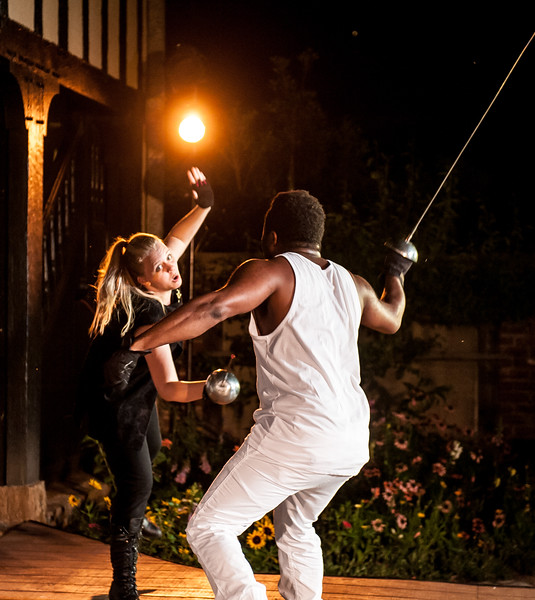 “Molly and Alex Wiles play it as two women who didn’t think of themselves as gay but they’ve been good friends forever and then found that they were falling in love,” describes Powell. “And they can’t be together, because Hamlet’s going to rule Denmark. It’s so moving and so painful and so relevant. It’s something that we’re all very aware of now–that there are people who have loved each other and have not been able to make it official.”

As if to prove her point, the Supreme Court, during the rehearsal process, handed down its decision that banning same-sex marriage is unconstitutional. Plus, of course, the realization of the power of pronouns in the text is something all of us–particularly the media–are familiar with in the wake of the Caitlyn Jenner unveiling.

That Shakespeare. There’s always something timelessly topical to find!

“And then, too,” adds Powell. “It aligned with the question of how a modern woman fits into this role that has been traditionally male rulers, how we view her with our expectations of a man, and how she’s expected to behave.”

I ask Molly Hood, who is behaving very well during this discussion, by the way, what it’s like to experience the meta version of that question–how she’s handling the expectations of being (and playing) a female in a man’s theatrical role.

She is awfully cheerful and good-natured for someone who, any minute, is about to leave the interview to go rehearse as a tortured soul. “When we first start out,” she remembers. “I thought, ‘This is great! I don’t have to live up to any of these wonderful men who played the role before me!’ But then as you dive deeper and deeper into the layers of the text, it starts to mess with your head. I started to think, ‘Oh…I have to be on stage and say ‘To be or not to be.’ I have to actually say those famous words.”

Hood and her fellow cast members hit upon many places in the text where the traditional representation of a scene just didn’t work with her Hamlet. For instance, in the famous “Get thee to a nunnery!” scene, Hamlet gets pretty physically rough with Ophelia, and Hood and Wiles tried to play it that way, but it just didn’t feel right. They wouldn’t tell me what the solution was that made it more authentic of a scene between two females, and I didn’t want a spoiler anyway.

Likewise, Hamlet and Gertrude’s interactions usually range from physical and sexually tense–in the rehearsal process of this production, it became clear to Hood and Powell that a female Hamlet understands the deep love that Gertrude feels for her (understandably) pissed off son. As a result, there’s an undercurrent of love with a different take on betrayal.

“Everyone [in the cast] was really tuned in from the beginning,” says Powell, when I ask her if the rest of the cast had any trouble adjusting their own performances. “The thing we did have to battle was our own history of the play and our stereotypes.”

The contemporary costuming helps to make completely clear that Hamlet-the-character is female and not just Hood-the-actor–“There’s a visual vocabulary that we all understand–we can very easily tell who everyone is through what they’re wearing. It’s what modern college students would wear, what modern royals would wear,” Powell says. “One of our favorites is Horatio’s hoodie, because he’s a broke student.”

Hood gets to don a serious black leather jacket, which of course is our visual vocabulary for “badass.”

“Sometimes, when actors get handed what they’re going to wear, it’s like looking at a dog who has to wear a holiday sweater,” jokes Powell. She works closely with her costumers, whom she claims (affectionately) to abuse. Tight budgets, high expectations–the team cranks out wardrobes that help both the actor and the audience settle into the role.

Says Hood, “And when it works, it’s like…” she makes an explosion sound. “We’re on fire.”

No one literally bursts into flames in this production, as Agecroft’s 400-year-old environs have got to be protected. Working in a setting that’s both antique and outdoor2 comes with its challenges, but Powell and Hood both express many emotions about Agecroft and what it symbolizes to them. It’s as close to real Shakespeare as they can get, and the decades-long tradition of hosting the festival there means that the grounds, the courtyard, the house itself, are permanently linked to their favorite time of year.

Check out Molly Hood in Hamlet beginning on Thursday, July 9th at Agecroft Hall. Showtimes are at 7:30. Tickets are $30 for adults, $25 for seniors, $15 for students Buy tickets online.