Don Jon: It takes one to tango

Joseph Gordon-Levitt writes, acts, and directs this film about a pleasant Jersey fellow and his nightly solo flights to Pleasureville. Note: This review and the film it discusses both contain some very adult material, which I almost endeavor to treat in an adult way.

When an established actor writes, directs, and stars in his or her own film, it often feels like a masturbatory experience. Joseph Gordon-Levitt’s new film, Don Jon, may depict actual, awkward, and obsessive self-sex over and over (and over) again, but the result1 will surprise you. 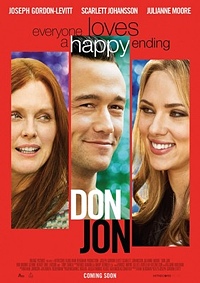 This film is good, man! First, JGL created a character that surely does him no favors in the ego-stroking department: Jon Martello, a swaggery, slicked-hair Jersey guy has a sin-all-week-atone-on-Sunday attitude towards life as he pumps iron, tends bar, brings a different girl home every night, and then savors the Internet’s fine selection of pornography once that girl is asleep. Real sex doesn’t measure up, he tells us. Sure, boobs are nice to touch in person, but real girls are pretty vanilla about what they’re willing to do once you get them alone. Yet get them alone is what he continues to do, until the night he meets Barbara (Scarlett Johansson).

A little more coy than the guidettes he scores nightly, Barbara piques Jon’s interest to the point of obsession. He finds her on Facebook, admires her selfies, and decides that maybe what he’s been missing in his Real Person sex life is some sort of meaningful relationship that will allow him to delve deeper into his sexual fantasies.

It’s not an entirely subtle film, but Don Jon follows in the vein of Silver Linings Playbook, with a solid structure, relatable themes, great comedy, and incredible performances. The central theme may be about mutual respect and trust in relationships, but it also brushes up against addiction, religious salvation versus personal growth, family pressures, double standards, and even the media’s rampant objectification of the female form. Not too shabby for a film that involves about a thousand ugly orgasms!

The Jersey setting allows for plenty of comedy, but also makes the point that this situation is completely universal. And maybe he gels his hair too much and maybe he wears a wifebeater to dinner, but that doesn’t mean Jon doesn’t deserve a little personal growth.

JGL put his heart, his soul, and both dimples into his character, that’s for sure, as did ScarJo, who played nasal, wheedling Barbara to such perfection that it’s hard to imagine that this overdone creature was ever anywhere NEAR Lost in Translation. Julianne Moore, as Barbara’s foil, Esther, is predictably good, but Tony Danza as Jon Sr….sorry, is it common knowledge that he’s amazing? Did I miss that? Will he be the next Thomas Haden Church?2 Why does he look so well-preserved? Has he always been so muscular? What is happening? What year is this? Who am I? It’s unnerving, to say the least.

JLG made a bold choice with this one, but it’s paid off. And if this is just the start of what he can do, we’ve got good things coming.

All of the above reasons, plus a couple of adorable cameos.

Women don’t talk to each other about anything other than men, but the men return the favor. It fails, but as romcoms go, this one’s lessons were a lot more progressive.