Django Unchained: The “D” is silent, but the pistol isn’t

A quintessential Tarantino bloodbath that pulls out all the stops (and then shoots them into someone’s eye). Quentin Tarantino’s newest blood-splattered opus starts off like a typical spaghetti Western: whistle-y theme song, crimson titles, and mountains in the distance. A chain gang of black men shuffle through beautiful terrain. The whip scars on their back and the homespun material of their pants start to clue us in that these dudes aren’t prisoners. They’re frigging SLAVES! 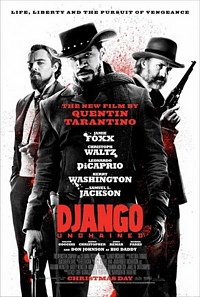 Django Unchained steers the spaghetti Western southeastearly to antebellum Mississippi. Instead of renegade cowboys, we have a renegade slave, played by Jamie Foxx. Recently freed by a cheerful little bounty hunter named Dr. Schultz, Django (Foxx) works his way across the country with his mind fixed on freeing his enslaved wife. He’s got a steely gaze, a set jaw…and not much else. But Schultz (played by Christoph Waltz) decides to handle the details.

As always, Tarantino has packed his film with talent.1 It takes a few scenes to readjust your perception of Waltz as a good guy, rather than the terrifyingly calm Nazi from 2009’s Inglourious Basterds, but rest assured, it does happen. Schultz has a crinkly-eyed smile, a way with language, and a heart of gold (or some metal that is similar to gold but doesn’t mind shooting people point blank if they deserve it). He’s the perfect foil to Django’s taciturn determination as the pair carve a swathe of righteousness through, let’s face it, a really crappy period of American history.

It’s that crappiness that Tarantino wants to lay bare. Just as he doesn’t let you turn away from scenes of graphic violence (in this case, mostly gunshots, but dang, do those bullets seem like they’re exploding the Hi-C mascot every time!), he takes you right into the heart of the slaveholding South. Django and Schultz alight upon Monsieur Candie, a rich planter with a taste for cruelty that no one else seems to mind. Candie, played by Leonardo DiCaprio and his unfortunate Southern accent, is despicable, but he’s representative of a larger, much larger system of guys just like him. Tarantino uses the ugliest part of our history as a backdrop for a compelling, gory, shoot-em-up, revenge tale. It’s even funny at times, with the most LOLs originating from a scene depicting a Ku Klux Klan raid starring Don Johnson and Jonah Hill. I have a hard time believing any other such scene exists. But there it is. It’s terrible, it’s despicable, but it’s the truth.

By far, the most chilling character is that of Stephen, Candie’s head house slave, whose tremors and eye rolling have put Samuel L. Jackson’s acting skills back on the map of legitimacy.2 Manipulative and eagle-eyed, Stephen is closely allied with his white masters and, according to a statement Django makes about the head house slave’s role on the plantation, not the only one of his kind. It was a different time with different moral compasses, and, like Shoshana in Ingourious Basterds, Django is our agent of change.3

So it’s violent, yes, but with each head that gets blown off and geyser of blood that shoots into the air, we feel more and more satisfied. We can’t go back and erase the awful things we did, but we sure can fantasize about doing so.

You liked Inglourious Basterds. Tarantino movies are Tarantino movies, but these two are not only very similar in style and message, they’re also the best he’s done in his long career.

Your stomach is weak and your aversions to bloodshed are strong. While a couple of good people die gruesome deaths (including one poor horse), for the most part, anyway, it’s only very, very bad folks who get the Tarantino treatment. Even so, there are so many showers of blood throughout that you will be a tiny bit surprised when the lights come on and you don’t have any on your shirt. Not for the squeamish.