The late Princess of Wales finds her true love, and it all ends in a fairytale way! You wish! Let’s say you want to win all the Oscars, and let’s say you had your grubby little paws on a screenplay about the late Princess of Wales. If you were smart, you would craft a lengthy biopic bent on heightening the tightly held belief that Diana was a demigoddess come to earth to heal the sick with earnest looks and a light hand on the cheek. But a demigoddess unlucky in love and tortured by the celebrity she needed in order to make real change with her humanitarian efforts. 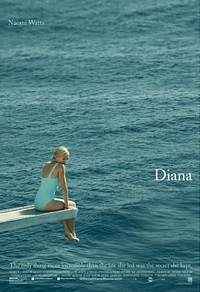 By no means am I implying that any of the above isn’t true, but Oliver Hirschbiegel certainly plays it all up in his new film, Diana. Naomi Watts, a little wisp of a thing, does a fair imitation of the Princess’s famous media appearances, which she obviously studied frame by frame in order to get the facial nuances right. Whether intentional or not, those nuances don’t carry over to Regular Offscreen Diana (who lives in a regular old palace). Watts’s Diana looks everyone dreamily in the eye and speaks a tad breathily, which brings Marilyn Monroe to mind.

And, like, what are you doing here in my mind, Marilyn? You are about as far from a British ex-monarch as you can be. Sure, I didn’t know Diana personally, so maybe that’s really how she was. Kate Snell’s book, Diana: Her Last Love does claim to know just about everything about Di—its expose of her relationship with heart surgeon Hasnat Khan was the inspiration for the film. The late Dodi Fayed’s family insists that he was the love of her life, and this book insists otherwise. And that’s where we are.

The film is passable: a collection of wide shots of Diana looking very lonely rattling about her palace all by herself mixed with some close-ups of a face that, over the course of the film, we get to know very, very well. She goes from sad to happy during the first half hour of the film, as she meets Hasnat (Naveen Andrews). From there, she’s up and down, as their relationship both fulfills and frustrates her. Hasnat is a private guy; Diana’s followed by the paparazzi (with gloriously grim foretelling that’s done rather well). He’s a Muslim, she’s a Christian. He’s from Pakistan, who clearly remembers British screw-ups, and she’s kind of a British monarch. You can see how trouble might begin to brew in Paradise.

Takes forever to get there, though. The film’s running time is around two hours, but it feels like three, as you see them repeat the same cycles. Diana walks around on very expensive heels, her feet hurt, she kicks them off, she’s a real rebel. Hasnat turns up in a tabloid. A breakup ensues. She barefoots her way back into his life. All is well again. Until it’s not, for real this time. Sad Diana returns.

Then, the film argues, poor Dodi is just a pawn in her game to make her heart surgeon lover jealous.

Yes, no, maybe so. Maybe it doesn’t matter (except to Hasnat, the only one of the three still alive). The film’s real themes are about celebrity and what it can do to a person. Diana’s immense fame allowed her to bring instant visibility to issues in third world countries, yet she couldn’t go shopping without being run down by the media. A worthy trade-off? Today’s world is different, and I believe we would have allowed her a peaceful life, if that’s what she wanted. Yet, perhaps today’s world is different1 because of Diana and her untimely death.

There are books out there about how Di was less than compassionate—manipulative and image-obsessed. Clearly, Diana, as does Snell’s book, prefers to paint her as a saint deserving of the public’s boundless awe: “Is that a woman grieving in a cemetery? Stop the car. I must touch her gently on the face in front of these cameras.” Even though Watts certainly plays a wide-eyed, friendly Diana, the moments of interest in other people seem jarring in a movie that portrays a woman who seems to think about her boyfriend more than anything else in the world. Hirschbiegel would have done well to bring those two sides of her into balance. Showing her humanitarian side was clearly his intention, but it gets lost amid the minute details of an on-again, off-again romance.

Either way, it was enlightening, as biopics often are. And usually, my biggest pet peeve with films like this is that they always make it seem like everyone in the universe was following the subject of the film with rapt attention. Ray Charles, Johnny Cash, Harvey Milk—all cool guys, of course, but their actions simply did not captivate the world like Diana did. We were obsessed with news of her, and we have learned our lesson. Hopefully!

It’s interesting information to know, however inaccurate it might be. And seeing someone come out of the depths of despair into real happiness can be very inspiring.

It’s not the most gripping film in the world, and it has many flaws. Plus, not sold on the acting over here.

No problem, although she does talk about Hasnat most of the time with her gal pals.