Mum is the world when it comes to the illegal distribution of music. So many people do it and so few people talk about it. Trombonist and regular porch sitter Bryan Hooten and saxophonist and regular rival John Lilley have each contributed 500 words discussing both sides of this topic.

cut·ting
[kuht-ing]
–noun
1. the act of a person or thing that cuts.
2. something cut, cut off, or cut out.
3. Horticulture . a piece, as a root, stem, or leaf, cut from a plant and used for propagation.

con·test
[n. kon-test; v. kuhn-test]
–noun
1. a race, conflict, or other competition between rivals, as for a prize.
2. struggle for victory or superiority.
3. strife in argument; dispute; controversy: Their marriage was marred by perpetual contest.

Mum is the world when it comes to the illegal distribution of music. So many people do it and so few people talk about it. Trombonist and regular porch sitter Bryan Hooten and saxophonist and regular rival John Lilley have each contributed 500 words discussing two sides of this controversial topic. 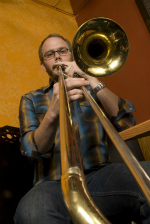 Talking about the money side of the arts is always tricky. While there are exceptions, the vast majority of artists I know do their work for its own sake, not for the achievement of fame or riches. However, in order to spend the countless hours in the practice room, in the studio, in the van and on the stage, money must be made. The question of whether or not it’s ok to download media illegally is about much more than money, however. This is a question about human relationships.

Downloading media illegally is wrong for a very simple reason: Technically, it’s stealing. If artists wanted their audience to have any or all of their work for free, they would make it free. If an artist ascribes a certain value to his or her work, the audience can either acquiesce to that level of value or not. If we value someone’s work and want reap the benefits that artist’s continued ability to create, we must invest in it. With all the talk of sustainability in regards to our natural resources, we should obviously strive for sustainability in our creative resources. In music, for example, albums don’t just appear out of thin air. Booking studio time, hiring musicians, hiring a recording engineer, mastering, and printing up physical albums to sell all cost money. Many musicians that I know don’t go into the album-creation process thinking that they will make their money back, but every little bit helps.

We cannot view the relationship between artist and audience as strictly producer/consumer, however. This relationship is a sacred one. As in any relationship, if both parties don’t agree on its inherent value, it can no longer exist. Much of the great art we love was and is made by professional artists. They are professionals just like lawyers, doctors, janitors, bartenders or anyone else with a full-time job. Could they keep working if their services and products were free? The question we have to ask ourselves about any behavior is: if everyone acted like this, what would happen? Is the next step a justification for sneaking into performances for free? Sooner or later, full-time artists would cease to exist. In the end, art is connected to the human beings that make it and that connection must be honored on personal and financial levels.

In the interest of full disclosure, I don’t think any of us who love music can claim to be total saints in this department. Personally, while I’ve never sought out an album for illegal download on my own computer, I have accepted, as gifts for study from fellow musicians, data discs and portable hard-drives full of classic recordings. This is a fine line, I know. One could make the case that, as a student of music, there is no way to afford everything we need to listen to. However, one could also make the case that sacrifice, financially or otherwise, is a huge part of a life in the arts. 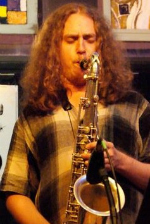 As a musician trying to figure out how to make my chosen profession an employment reality, it’s a bit difficult for me to argue in favor of taking someone’s artistic product without permission. Although few musician’s actually make a sizable portion of their income through album sales, it is an important piece of the pie for, if nothing else, recouping costs of recording, printing and pressing CD’s. But I also believe that the battle over the monetary value of recorded music has already largely been fought and won with the result being an increase in the digital distribution of albums for a much lower overhead and cost to the consumer.

With our society become increasingly accustomed to having any kind of media at our fingertips, whether it be television programming, books, or music, we expect instant access to an extensive catalog of recorded music without paying a variable fee based on how often you stream or download content. It won’t be free, but it will offer a more complete a catalog of music for a cheaper price than anything we’ve used before. We already see the industry trending in this direction with Apple paying the four largest major music labels up to a total of $150 million for the rights to include their music in its iCloud music streaming service. In addition to being able to store any purchases from the itunes store in an online storage locker accessible from any device with internet access, you will even be able to upload all the music you’ve downloaded illegally to this online database of music for $25 a month.

Itunes is simply following in a trend that we see in other progressive music media in which these entities are recognizing an expectation by the public. Everywhere we see that the record industry is undergoing a shift from making money off of audio recordings to monetizing an expanded experience. National Public Radio streams full albums from major artists free from their website weeks before they are available for purchase. Pandora radio has an extensive catalog of music that streams for free in addition to developing an artificial intelligence to help you find new music. You can now see live performances by the New York Metropolitan Opera in movie theaters.

Premium content is the future of the music industry and people are willing to pay for it. As our culture becomes more technology-centric, we will use new inventions to experience music in a more immersive way than ever before. Record companies, in turn, will have to sell something that uses cutting edge technology far beyond the computing ability of your personal computer and will therefore be impervious to illegal online distribution. Just as new 3D movies offer a cinematic experience beyond what you can experience in your home, music technology will offer some sort of equivalent immersive experience.

The illegal dissemination of music has already prompted a money bloated and backward looking music industry to change in profound and potentially wonderful ways that it would have never done by its own free will. Whether or not you think illegally distributing music is an action of serious moral weight is irrelevant, the fact that so many people have done it, has already shaped the future of the industry in an exciting new direction.

Check back on Friday for rebuttals. Bryan and John’s “strong” personalities will definitely make it an interesting read!

Bryan Hooten plays trombone in Ombak, Fight the Big Bull, No BS! Brass and is working on a solo trombone project. He teaches music at VCU, Hanover High School and James River High School and is a frequent contributor to RVANews and RVAJazz. He is currently accepting challenges in table-tennis. http://bryanhooten.com

John Lilley plays saxophone in Fight the Big Bull, Glows in the Dark and James Wallace in the Naked Light. When he isn’t closing big business deals at work he watches movies, cooks amazing food and engages in extemporaneous debate with friends.