Thousands have bought tickets to the event, but thousands more are protesting it. Over 20 bulls, each weighing an average of 1,000 lbs., will charge headlong at willing participants this Saturday at the Virginia Motorsports Park in Petersburg, VA. It’s the debut of The Great Bull Run, which kicks off its inaugural year of operations with a ten-city American tour.

It’s inspired by the annual Running of the Bulls in Pamplona, Spain.

“There are a lot of people in the US that want to go run with the bulls,” said Rob Dickens, the event’s COO, about the annual weeklong event in Spain.

But Dickens said that many, like him, don’t have the money to fund the trip, or the ability to take a week off from work for the festival. Dickens thought that if he felt that way, “there must be thousands in the US and North America” who did also.

Another Spanish event that he and others have pined to participate in is La Tomatina, an annual festival on the last Wednesday of August in the town of Buñol in which people fling, pelt, and slosh through an arsenal of roughly 150,000 tomatoes.1

“What we wanted to do here is combine the big events into one festival,” Dickens said. “Something fun, exciting, crazy, and wild.” What resulted is having both a bull run and a Tomato Royale all in one day.

Participants of this weekend’s Bull Run will position themselves anywhere on the quarter-mile track. After the bulls are released–in waves of eight, roughly 15 seconds a part–participants can either run with, or dodge, the charging animals.

Dickens said that, unlike the Pamplonian races, there will be no sharp street corners for the bulls to maneuver. And humans won’t have to be trapped by unscalable walls.

Organizers will lay down cattle fencing to contain the bulls, but which will allow participants to climb out of danger. The fencing will also have nooks for people who want to escape the oncoming path of charging bulls, but still remain on the course. 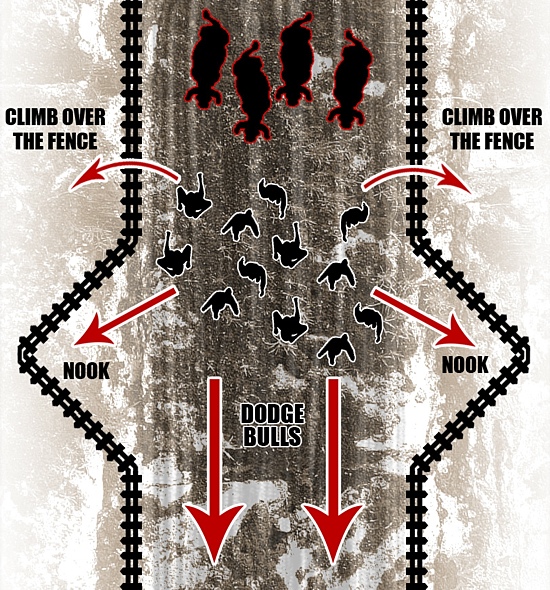 But the run, by design, is still far from safe. That’s the point. “The whole purpose of the event is to put yourself into mortal danger,” he said. “We are worried that people will get hurt, but that is inevitable.” In addition to requiring participants to sign a waiver, The Great Bull Run has obtained insurance to operate.2

Dickens said that roughly 20,000 have collectively signed up to participate in the nationwide events. Roughly 5,000 people have purchased tickets for the Richmond one, which will also include bands, food, beer, and games. Following the running of the bulls, participators can sling some of the 5,000 tomatoes that will be on hand during the afternoon Tomato Royale.

While no one gives a second thought to the well-being of the tomatoes during Saturday’s event, many object to its use of the bulls.

“My phone is going off the hook,” said Laura Donahue, Virginia director of the Humane Society of the United States (HSUS). “People are just baffled that anybody would do this.”

Donahue said that many people, upon hearing of the bull run coming to the region, thought it was “a joke.” When they realized it wasn’t, they questioned how it would affect the welfare of the animals.

Dickens has tried to allay those concerns. “There’s no physical abuse, not mental, or emotional abuse going on,” he said of the bulls’ treatment. “We don’t force them to run, we train them to run.”

He said the bulls won’t run on pavement, as they do in Pamplona. Instead, organizers will lay down dirt to give the bulls better traction while running, which he believes will minimize injuries to the animals. At least one veterinarian will be on site.

But that’s not enough for the HSUS, which in June penned a letter to Secretary Tom Vilsack of the US Department of Agriculture (USDA) calling on the USDA to investigate The Great Bull Run on suspicion that it violates the federal Animal Welfare Act (AWA).

The HSUS contends that event organizers must possess a license to operate. It argues that organizers are “exhibitors” of animals under the law, which include “carnivals, circuses, animal acts, zoos, and educational exhibits, exhibiting such animals whether operated for profit or not.”

Dickens disagrees. “The Humane Society’s letter intentionally and egregiously misconstrues the federal law in question,” he said. “The law that they’re quoting doesn’t apply to rodeos or like sporting events that utilize animals. Running with the bulls is covered by the express exception to sporting events contained in that law.”

In fact, the law specifically excludes license requirements for: “retail pet stores, horse and dog races, organizations sponsoring and all persons participating in State and county fairs, livestock shows, rodeos” and others. It certainly seems that The Great Bull Run may legally operate without a license.

However, section 2.131(c)(1) of the AWA states: “During public exhibition, any animal must be handled so there is minimal risk of harm to the animal and to the public, with sufficient distance and/or barriers between the animal and the general viewing public so as to assure the safety of animals and the public.”

Laura Donahue said that a bull run is clearly “harmful to both animals and the people.” Aside from the obvious injuries to people, the bulls could suffer broken bones and lacerations during the event. So a case could be made that a bull run violates this clause in the AWA. However, there is no knowledge of any USDA investigation or intervention (inquiries made to the USDA were not returned by publication).

At the local level, Richmond Friends of Animals have created a petition on Change.org, which has been signed by over 4,300 people, asking Virginia Motorsports Park to cancel the event. The group will also “peacefully protest” the bull run on the day of the event.