We won’t tell anyone if you’re well past the age of passing as a “young adult,” but you add all of these to your wishlist anyway. Kat and Jess are the twin sisters behind the blog Books and Sensibility. They both graduated from VCU’s School of Communications in 2011, which was the same year they started their blog. Since then, their readership has expanded as fast as they can consume new books written for young adults. Below, they answer some questions about why they’ve chosen YA as their field of interest, and which books they recommend for this fall.

Why YA books? You guys are both really into literature, and there are so many genres to cover. As adults, what about young adult literature today really appeals to you?

We’ve been reading books for young adults since we were in high school, and after graduating from college we just picked up where we left off. When we started the blog in 2011, YA fiction had become super popular; we were reaching the end of the Twilight movies and the Hunger Games and Divergent series were gaining in popularity.

The blog started because we wanted to see if these trendy new YA books were as good as the books we read in high school. There were some initial doubts, but we discovered that these new YA books had interesting stories for passionate fans of all ages.

Kat: I think what has always appealed to me about YA right now is how varied and experimental the novels are allowed to be. Authors aren’t afraid to push boundaries with stories and the readers want that. I mean, I reviewed a YA novel last year about giant man eating grasshoppers (and it now has a movie deal). I also love how passionate the readers (both adult and teen) are and how much they want to share what they love. I never had that before starting the blog. I thought I was the only one who liked books.

Jess: While YA at its heart is meant for teens, I think why we (and so many other adults) read and review it is because YA doesn’t have limits on what it can be, it encompasses all genres and perspectives. A YA book could be a space dystopian or a contemporary love story. YA can be any genre as long as it’s told from the coming-of-age teen perspective.There is so much variety!

Do you dabble in YA books of yore? What are the contemporary trends and how have you seen it changing?

Kat: I’m so glad you asked this ! I think there is this idea that YA sprung fully formed after Twilight, but it has been around for a while, even if we didn’t use the term “YA.” I did read a lot of the older ones (like S.E Hinton and Judy Blume) in high school but haven’t really since starting the blog. I want to go back to these some day.

YA is a very trend-driven market, so for awhile it felt like it was all Girls in a Pretty Dress Paranormal Romances (seriously, we did a post on it) then it was all dystopians. And after The Fault In Our Stars came out, books about sick teenagers had a moment.

I think now we are seeing a lot of female-driven fantasy and books dealing with mental illness and teen suicide.

I really want to say that, while this is NOT a trend (because trends come and go), we are finally seeing a lot more diversity in the kinds of characters and writers presented. We are both big supporters for We Need Diverse Books. For a long time, if a YA book was about people of color or a LGBTQ character, it was all about the struggle. We didn’t see many stories about these characters going on adventures or falling in love. It was it was as if they had no other stories except ones about what it’s like to be marginalized.

What’s your goal for the blog? Do you want adult readers or YA readers (or both!)?

It doesn’t really matter to us if the readers are adults or teens. We just like having people who want to talk about books. We’re not in it for the money, most book bloggers are never going to make money off their blogs. In fact, we had ads from a network at one point but took them off because it took away from our content and design. That said, we do occasionally get a chance to work with publicists, and it’s fun to get advance copies of books for review every now and then.

Jess: I don’t know if I have specific goals from the blog. I’d just like to get more content out there, and I keep saying I want to do a book-related podcast one day. I do think it would be awesome to get more teen readers. It would have been great to have book blogs when I was a teen to help me dig through the books and find what worked for me.

Kat: I don’t know either. I just like having a catalog of my reading life, a place to talk about what I’m reading and have a way to connect with other readers. For so long I never talked about books with anyone because I didn’t think anyone else read like I did. Now, I know other bloggers who read even more than I do, and it’s so amazing all the things bookish people have in common.

So, long story short, we have no idea.

Have you guys always collaborated on projects? What was growing up together like? Did you fight over books?

Jess: We discovered food review blogs in high school (for some reason I really liked Lean Cuisines and wanted to see which ones were good), and after awhile I was like “Hey I could do this.” The blogging bug started there. We have left a handful of literary pun-named blogs to die a lonely death since high school. Sometimes we created them together and sometimes separately. This is the only blog that has lasted more than three months, and I think it’s because we’ve met so many other bloggers and authors in person and online to keep us inspired.

We are twins, and growing up we had a lot of similar interests, but when I think about it, I think reading was something we both did but we didn’t really “share” the books like we do now. We also have an older brother who didn’t read in high school, and now he has embraced his inner book nerd and is always telling us about the new books he’s discovered.

Kat: We’ve never really fought physically over books. In fact, growing up, the new Harry Potter always came out the same month as our birthday. So our brother would gift us one book and we’d have to share it, just passing it back and forth chapter by chapter all summer. That is until the last one came out–then he bought two.

Although we do get on each other about not reading books we like. Like Jess still hasn’t read the Outsiders. 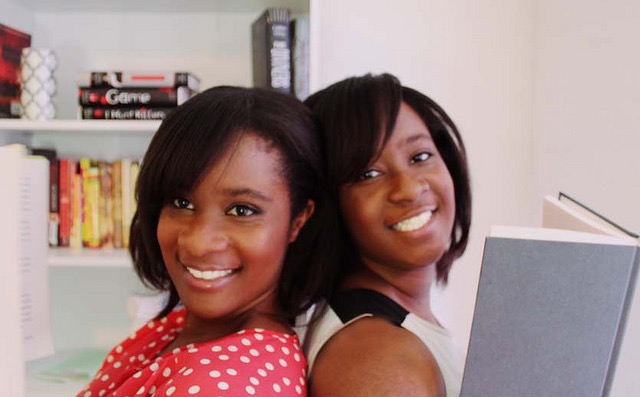 What are both of your top five favorite books, whether YA or not.

Ahhh, such a hard question to ask any reader ! I think most of these are from nostalgia.

Blanket recommendation: Audiobooks ! A good performance by the a good narrator can bring books to life, especially for reluctant readers. You can check out digital audiobooks from the library. Ask a librarian!

What are your top YA picks for this fall, so I can start loading up my nieces’ Christmas lists? And why did these make your lists?

We didn’t realize how many books we were excited about until we started writing this. In the book blogging world, we talk about our TBR (to be read) piles (or…shelves…or, um…entire bookcases) and questions like these are what starts them!

We also want to say, because books are expensive and buying books is a luxury for a lot of people, all these books are available at either the Henrico County or Richmond Public Library for hold.

I love books that have a high concept, and this one is about a teenage gangster from the 19th century who is bought back to life immediately after dying. Now immortal he seeks to find his purpose. In present day he chronicles his extraordinary life (and death. . .eh. . .eh ?) while sitting under the World Trade Center. . . on 9/11. I’ve already pre-ordered this on audio. –

Everything, Everything by Nicola Yoon • Release date: September 15th

This book came out this month, and it’s something teen me would have loved. A girl suffers from a rare illness that makes her allergic to everything. Her world changes when a troubled family and their teenage son move next door. It’s a mix of prose, text messages, IMs, and illustrations.

This is the last book in the Lunar Chronicles series, which is like Star Wars meets Hans Christian Anderson. Each book introduces a new reimagined fairy tale princess as the protagonist. This series is just so inventive and the audiobook narrator is very talented.

A town is ripped apart when a white police officer beats up a black teen for buying chips. Clearly very topical, it’s told from the perspective of the black teen who is beaten and a white teen who is related to the officer. l’ll be curious how the dueling perspectives will work. One of the things books help us do is make sense of the world, and I like that these two authors are attacking this topic.

This is the second book in the Young Elites series by one of my favorite authors. It’s a 14th-century urban fantasy in which children who survived a blood plague are left mutated and considered pariahs. A group known as the Young Elites have also developed special powers and have been waiting to start a revolution. I like how this book subverts a lot of the ideas in Hunger Games and Divergent about being the hero.

The tagline of this book is “Sometimes you have to be ordinary to be extraordinary,” and it’s about the normal people just trying to get by in the background of the Chosen One stories. Also, the cover glows in the dark!