A Park Avenue socialite falls from grace and ends up in a seedier part of San Francisco with her semi-estranged sister. Everyone’s lives are changed, and one person is Louis C.K. Woody Allen seems to make movies whether or not he feels inspired. In the past decade, they just keep coming at us, like baseballs lobbed from a machine. Occasionally, they’re beautiful, wonderful things (Match Point). Other times they’re quaintly cute (Midnight in Paris). Still others are somewhere in the middle, just pushing envelopes and exploring the ranges of fine actors (Vicky Cristina Barcelona). 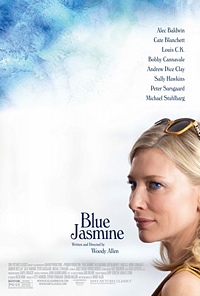 Blue Jasmine is allllmost in that last category! Unfortunately, this tale of a rattled woman who has fallen from a place of unimaginable wealth into the lap of her much dingier sister, has one polished toe firmly in Allen’s other favorite genre: films that miss the mark.

Cate Blanchett plays the haughty Jasmine French to perfection, complete with weird Super Rich American accent and dismissive gestures. The shocking thing is how recognizable it all felt. Sheesh, I KNOW people like that?

Her sister Ginger, played by another native Brit, Sally Hawkins, welcomes Jasmine to San Francisco as she recovers from some undefined catastrophe. Later on, we’ll learn that her husband, Hal (a very spritely Alec Baldwin) embezzled money, got caught, and left his wife to handle the world on her own for the first time.

OK. Seems like we know where this is going. And for awhile, it starts to go there as Jasmine deigns to get a menial job and Ginger starts to take her sister’s advice and date more “substantial” men than the mechanics and handymen she’s used to. Louis C.K. makes an appearance that’s far too brief. Peter Sarsgaard turns up as a knight in shining armor. Everything is ticking along at a correct pace, and we’re all improving! Hooray!

Then disaster strikes, as it has to do in order for a movie to be a movie. But the sisters take an unexpected turn from there. The only problem is that I couldn’t figure out why Allen diverged from the tried and true path. I’m all for shaking things up, but the reason for it was lacking for me. Are we trying to have a conversation about mental illness? About family? About trust?

Who the heck knows! There’s also a Big Reveal at the climax of the film, and I so wish I could talk freely about it here because, besides being underwhelming to the max, it’s yet another element with an unclear purpose. The first act felt wooden, as these terrific actors struggled with a weak script that laid out their background for us as if we were reading a high school book report. The second act improved mightily, but then…total convolution in the third? Is this a genius move, Woody, or are you losing your sense of focus?

I’d love to call it a character study, as every single facial expression of Blanchett’s was Oscar-worthy on its own. But to be honest, we don’t get a lot about Jasmine beyond her being rich, beautiful, and maddeningly clueless to the point that it must be deliberate. Ginger’s exposition is even worse: she became very blue collar and has a big heart. The end. Rich vs. poor. East coast vs. west coast. Even blonde vs. brunette.

Blue Jasmine is a whole made up of underdeveloped parts, and if I were still in college right now, I’d write a paper about how the main character is similarly constructed. But it’s a stretch, and I don’t think 21st century Woody Allen is that subtle.

The acting alone. Blanchett is difficult to believe, she’s that good.

Here is a list of things that are very purposefully brought up in the film but then glossed over: blue collar workers, San Francisco,1 electroshock therapy, and mental illness in general. Instead, we only delve into how shallow rich people are, family ties, and beige clothing. SO MUCH BEIGE, rich people! Get some color in your life!

Passes with flying colors. It’s too bad the movie wasn’t better, although maybe if gender equality is seeping into mediocre films, progress is being made!?