At the speed of light: the bright future of Light Tape

A state of the art company that has its product in just about every country you can think of (and then some) is based right here in town. What is Light Tape, what do they make, and why don’t more people know how amazing they are? It’s the coolest company that you’ve never heard of.

“We have stuff that companies like DuPont can’t figure out,” said Steve Pendlebury, President and co-founder of Richmond-based Light Tape. “I still sometimes pinch myself.” Only when he can squeeze in the time.

Two weeks ago he was in Germany. Later this week he’ll be in Miami. His company has products in Colombia, the Middle East, and is already planning for 2016 when Brazil hosts the summer Olympics. So, what does Light Tape actually do, you ask? 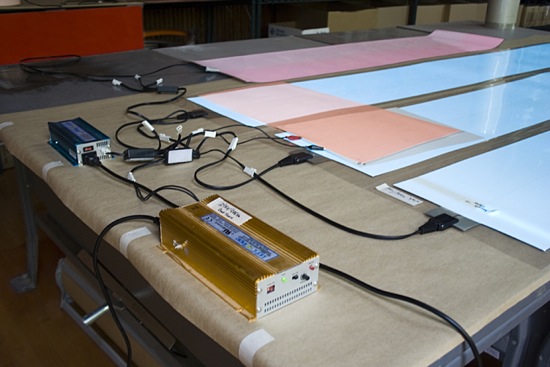 “Everything you see in here is custom,” said Pendlebury, leading me through their headquarters in Scott’s Addition. “It’s taken us years to perfect.” Their custom lighting configurations have been used on building accents, city infrastructure, and even on the bar of four-star hotels.

Light Tape is basically a flexible electroluminescent lamp. Two very thin flexible electrodes sandwich a layer of light-emitting phosphor. It can be bent and colored to virtually any specification. The emitted light can be seen miles away, and can pass through fog, snow, and other limited visibility conditions. It also consumes up to 93% less power than traditional lighting. While the material is intriguing on its own, it’s how Light Tape has used its product that inspires the imagination.

The company helped manufacture the costumes used in Disney’s 2010 film, Tron: Legacy. They also designed and installed a nearly seventy-foot-wide billboard for the film that lit Los Angeles. Singer Beyoncé and the band Franz Ferdinand have also used Light Tape material in their live shows. ESPN Argentina has it on their set. The company has also installed a four-story-high design in the lobby of Electronic Arts, the Vancouver-based video game developer. Pendlebury said that the installation was Light Tape’s “first big project.” 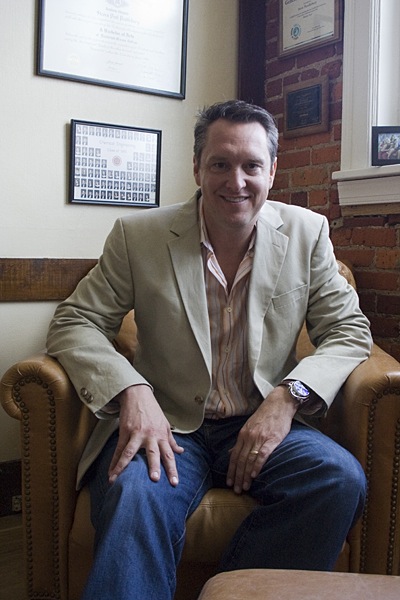 A graduate of Virginia Tech and Randolph-Macon College, Pendlebury started working at Fortune 500 company, Honeywell, in 1995. During his time at the company, Honeywell produced Aclar, a clear film that was used by pharmaceutical companies to package moisture-sensitive drugs. When electronics that used phosphorus components (e.g. plasma televisions) surged, Pendlebury saw an opportunity. He thought that a product like Aclar could be married with electroluminescent lamps (ELs).

He heard of a Southern California father and son that had begun making strides amalgamating the two technologies. “Maybe you should buy these guys,” he recalled saying to higher-ups in Honeywell. There was a future, a big future, in this. Honeywell didn’t see it the same way as Pendlebury: they didn’t want to “spend millions on an industry that didn’t exist.” It was true. There wasn’t an industry. Not yet.

Remembering his father’s advice to go into business for himself if ever given the opportunity, Pendlebury met with the father and son to discuss a partnership on their boat in Cabo, Mexico. In a few months, Pendlebry would leave Honeywell to start his own business. “I’ve been doing it ever since.”

Light Tape established itself in Chester County, where Pendlebury’s parents immigrated after leaving Britain when he was a toddler. To build the company, Light Tape appeared at trade fairs and conventions, including the world’s biggest trade fair: the biannual Light + Building expo held in Frankfurt, Germany (where Pendlebury was two weeks ago). The company had no product to sell at their first appearance in Frankfurt, but they networked…and then networked some more.

He said that the company currently has over 50,000 contacts that they’ve meticulously kept on record. Pendlebury shows off a business card recently given to him from a Dubai sheik (there were actually two cards given: one with the sheik pictured wearing sunglasses and one of him pictured without). He has several hundred business cards just from that trip alone. While networking was a vital component of the company’s success, it was not alone.

The company was—and still remains—selective in “picking the right projects to establish the brand.” Instead of flooding the market with Light Tape products—pushing quantity— the company has decided to build it’s name on innovative, quality designs. Even with this selective outlook, their resume is quite lengthy.

Incarnations of their product are in Malaysia, Singapore, and Nigeria. “It’s just everywhere.” He said that he envisioned Light Tape to be “international” from the start. “Businesses are difficult to grow without an international base,” he said. The good news is that the Internet and UPS make global business possible, as well as reasonably efficient. “The bad news is I’m competing with the whole world,” he said, smiling.

In November of last year, Light Tape moved into Scott’s Addition. One of the benefits of the new location is that it’s easier for the company to partner with those within the city. Ideas that Pendlebury said Light Tape is considering vary from: adding materials to the Back to the Bottom bus, installing their lights on several I-95 overpasses,1 and even a collaboration with the GRTC. He talks of wanting to contribute to the Diamond and thinks optimistically about adding to a new baseball stadium, if-and-when it’s constructed. “I am so excited to be in town,” he said.