One of the most impressive contemporary artists has created a ‘cult following’ here in Richmond. Tristin Lowe’s “Mocha Dick” has brought out tens of thousands of people to the VMFA to see the enormous felt creation. Lowe recently spoke to RVANews and a VMFA audience about his work and his whale.

The sea creature had survived over 100 attacks. Eager to kill the albino anomaly, early 19th Century whalers off the coast of southern Chile at Mocha Island threw harpoon after harpoon at the extraordinary sperm whale. Explorer Jeremiah Reynolds described the creature as “an old bull whale, of prodigious size and strength…white as wool.” Whalers ultimately killed the rare sperm whale, dubbed Mocha Dick, in 1838. His body, over 70 feet long, yielded 100 barrels of oil.

This fantastic whale inspired author Herman Melville to write his most well-known novel, Moby-Dick. It was a book that contemporary artist Tristin Lowe read in high school.

Lowe received his BFA from Massachusetts College of Art and studied at Parsons School of Design and Skowhegan School of Painting and Sculpture. “A lot of my earlier work was kinetic,” he says to me in a phone interview one morning. He focused his work “using electricity and mechanicals.” It was all very “inventory.”

These kinetic themes, however, left Lowe feeling a change was needed to, as he says, “clean-off the palette and quiet things down.” 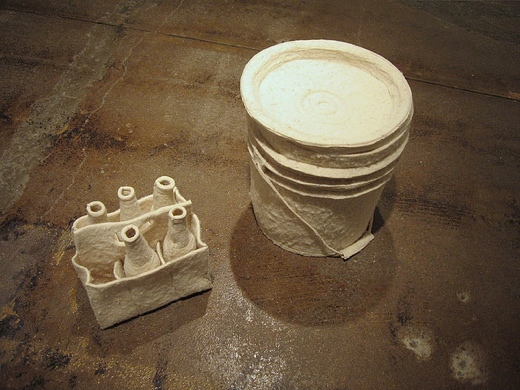 While deliberating how his art should progress, he read The Road, the Pulitzer winning novel by Cormac McCarthy. In the novel, a modern-day father and son wander a barren landscape wrought with destruction and cannibalism. Their dramatic quest for safety reminded Lowe of Moby Dick, and particularly of Ahab’s drive to kill the legendary whale. Not only did the “silence and stillness” of the book’s tone resonate with Lowe, the pervasive post-apocalyptic gray ash struck a visual chord with him. The visual of layers of “monochromatic” ash on top of one another reminded Lowe of a similar material: a large roll of industrial felt gifted to him years ago.

Lowe began smaller projects that used the material, such as bottles and chairs. While he was using felt in various projects, The Fabric Workshop and Museum in Philadelphia inquired to see if Lowe would want to collaborate on a project.

The story of and images conjured by Moby-Dick reemerged. Just as Ishmael was called to the sea, Lowe felt driven to take on something bigger that harkened to a “yesteryear of glory.” 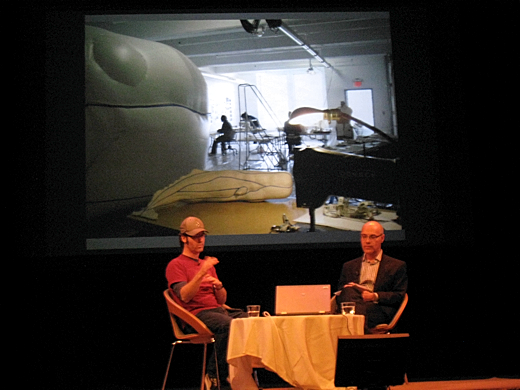 Tristin Lowe speaking at the VMFA with curator John Ravenal

Lowe became fascinated with whales. He used online pictorial and video footage to study and sketch the bodily contours of the “amazing creatures.” It was during this research process that Lowe read the historical accounts of Jeremiah Reynolds and learned of the Mocha Dick story. “I was blown away,” says Lowe. Shortly thereafter, Lowe designed a quarter-scale model, and then, working with six people employed by the The Fabric Workshop, he designed and built the 52-foot Mocha Dick. It took six months.

The sculpture’s armature is made out of inflatable vinyl with eleven sheets of white industrial wool felt wrapped around the structure all connected by zippers. The sculpture weighs approximately 700lbs.

Tristin Lowe spoke about “Mocha Dick,” as well as his art to nearly 200 people at the Virginia Museum of Fine Arts last Thursday. In the conversation portion of the evening, led by VMFA Curator of Modern and Contemporary Art, John Ravenal, Lowe also spoke about his more recent felt pieces, including “Lunacy,” a twelve-and-a-half foot sphere made from fourteen sections of felt replete with scaled craters of the Moon’s surface.

During his introductory remarks, Ravenal said that “Mocha Dick” had gained a “cult following.” He went on to say that many VMFA visitors approach the first staff of the museum that they encounter to ask, “Where is the whale?” Ravenal also remarked that it took a bit of time figure out if the large sculpture would even fit in the museum. It took Lowe and staff three days to assemble “Mocha Dick,” which now sits in a room within the Museum’s 21st Century Gallery.

“Mocha Dick” will be on display at the VMFA through Nov. 27th. No tickets are required, and the exhibit is free to the public.